How to Make Your Own Star Wars Terrarium!

It feels like most of my posts these days are in some way Star Wars related. What can I say? I just really love Star Wars and the wait for The Force Awakens has been practically unbearable. We’re just two months out now and so I’m trying to find creative ways to pass the time.

Today, I made a Star Wars terrarium.

Now, I had never made a terrarium before but after getting a tabletop figure of Wedge Antilles in a gift exchange I felt inspired. It turns out making a terrarium isn’t that difficult. You just need a few, simple materials and you can make something that looks pretty freakin’ awesome.

Here are the materials I used: 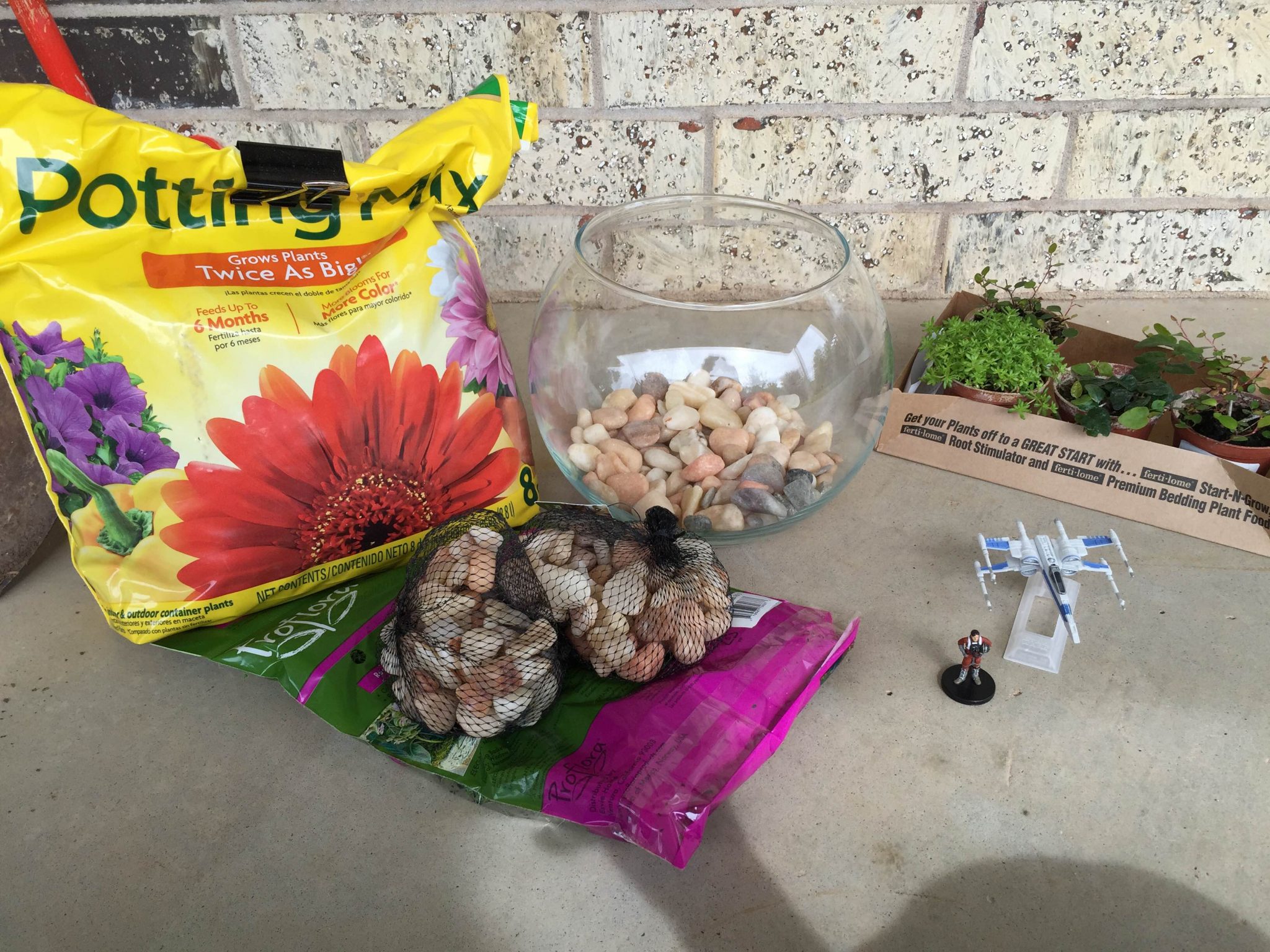 If you’re wondering where to find little figures for your terrarium, Micro Machines are back in anticipation of The Force Awakens and are the perfect size for something like this. You can walk into any toy store or toy section and find all kinds of awesome mini figures and vehicles. They’ve got crashed tie-fighters, pilots and ships, Obi-Wan and General Grievous, and more available. Any of those would look great!

You don’t need to use all the same materials I used but those are going to be the basics.

Once you have all your materials, it only takes about five to ten minutes to put it all together once you have it so don’t be intimidated because it seems like a big production. It’s really not.

Take your rocks and put a layer of them at the bottom of your glass container. This helps with the water drainage. 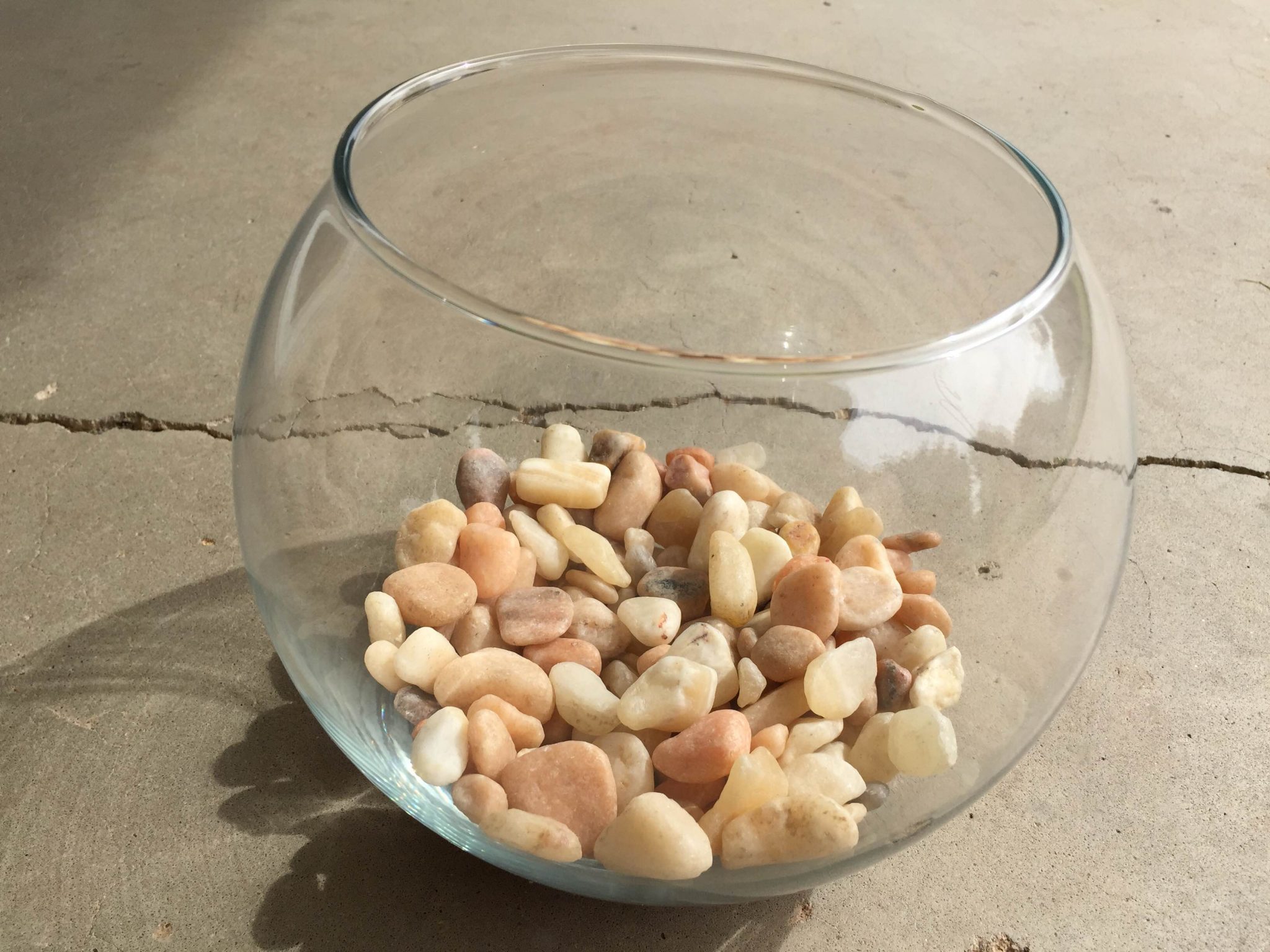 The next step is to take your moss and put a layer over the rocks. You’ll want to make sure that you get it all the way up against the glass. This helps to keep the soil from falling down into the rocks and makes it look a lot nicer from the outside.

I unfortunately didn’t get my moss close enough to the glass so some soil fell through. (It doesn’t look too bad but it could certainly look better – and cleaner – had I been more careful.)

The next step – and generally the final step – is pretty simple: add soil and plant your plants!

I know, that’s a pretty general step. Basically what you need to do is add your potting soil being careful to try and keep it up on top of the moss. Put a couple of inches of soil on top of the moss before planting. Then take your plants and clean as much of the original soil off the roots as you can. 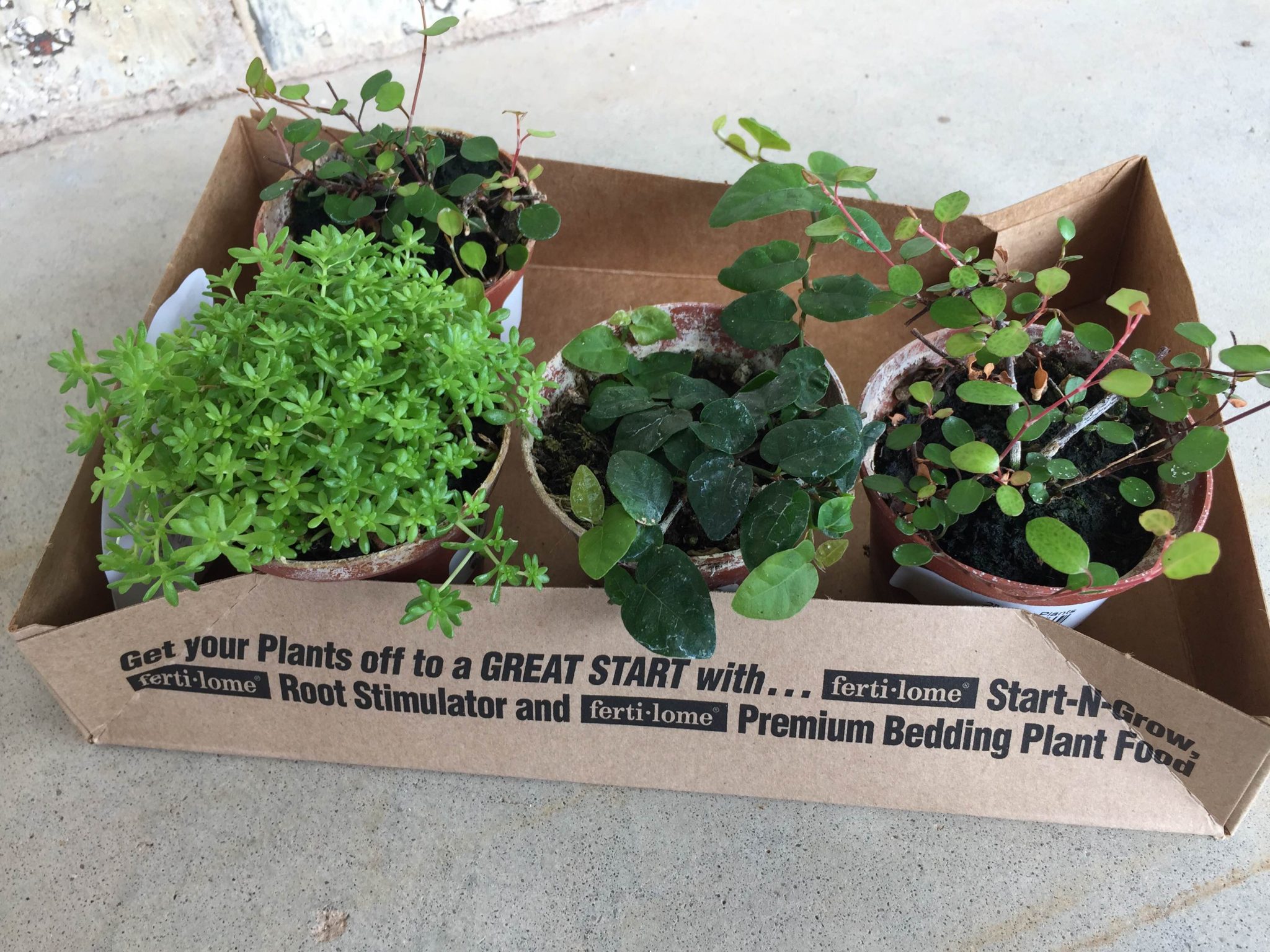 You’ll then make little holes in the soil and pop them in!

There’s no right or wrong way to organize plant your plants. Do what you think looks good! I’d recommend putting taller ones towards the back of your scene and then using shorter ones closer to the front so as not to obstruct your figures. Other than that, feel free to mix it up and move things around. When you’re done, if you have any rocks left, you can add those in, too, as added detail. 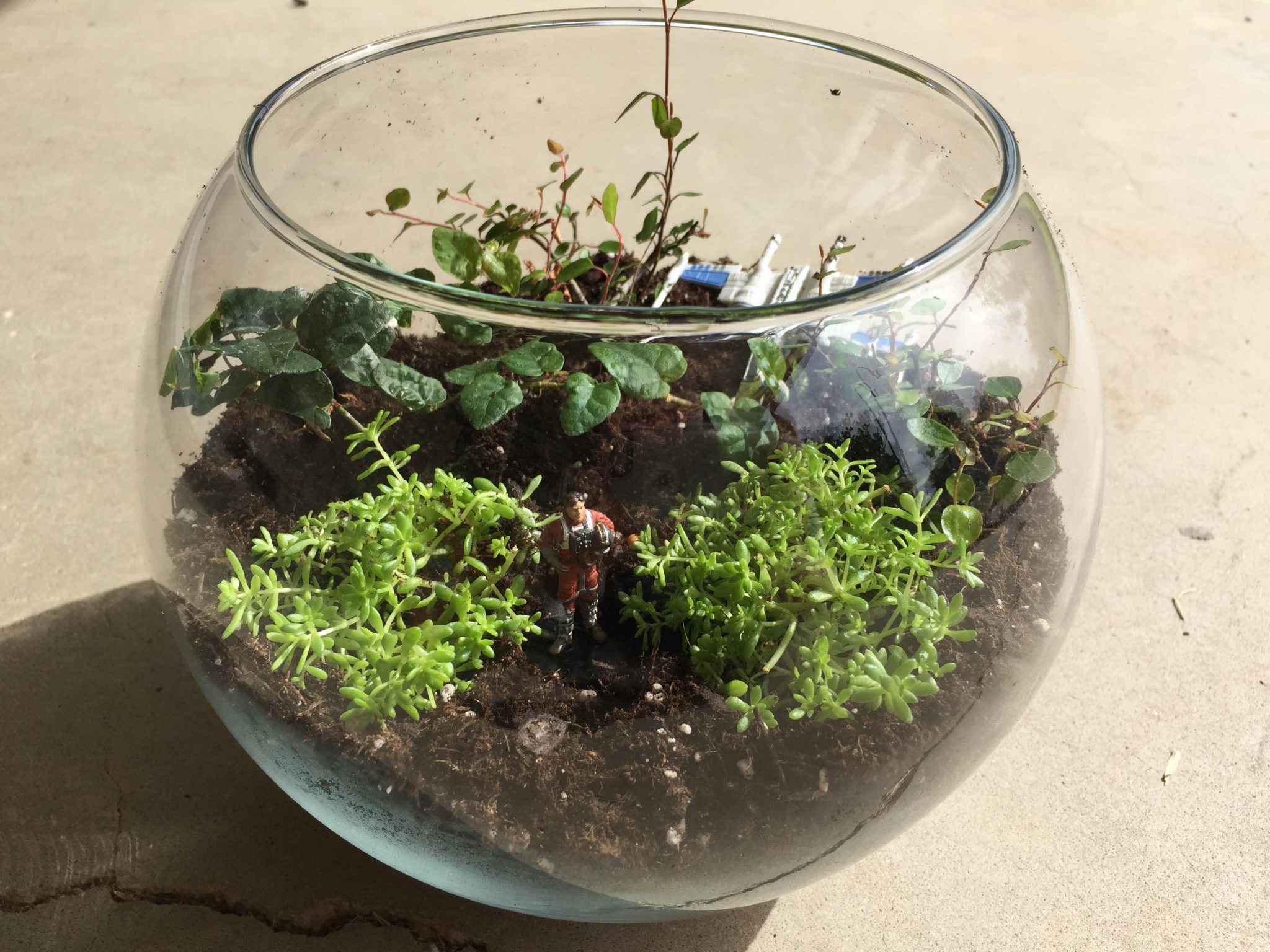 I went into my terrarium with a general idea of what I wanted to do. My scene was meant to be a downed X-Wing pilot stranded on a forest world. So I looked for plants that were kind of wild and unruly. I thought about using some extra moss as a ground cover but as I started putting things together I decided I liked the look of the X-Wing crashed into the dirt and the stranded pilot standing unobscured.

I think it turned out pretty good!

And I bet yours will look great, too!

Making a terrarium turned out to be a pretty quick, easy, and fun project. Now I not only have a little bit of green to brighten up my room but I also found away to mix Star Wars into it!

With the holidays coming up, a terrarium like this could be a pretty awesome gift. It doesn’t take much to get time or effort on your part but it still will look really cool all the same. Your friends or loved ones will definitely appreciate it and as long as you use fairly hearty plants (succulents do well in terrariums) even those without much of a green thumb should be able to keep their terrariums alive. (And I say that as someone who historically does NOT do well at keeping plants alive.)

Get inspired, have fun, and may the Force be with you! 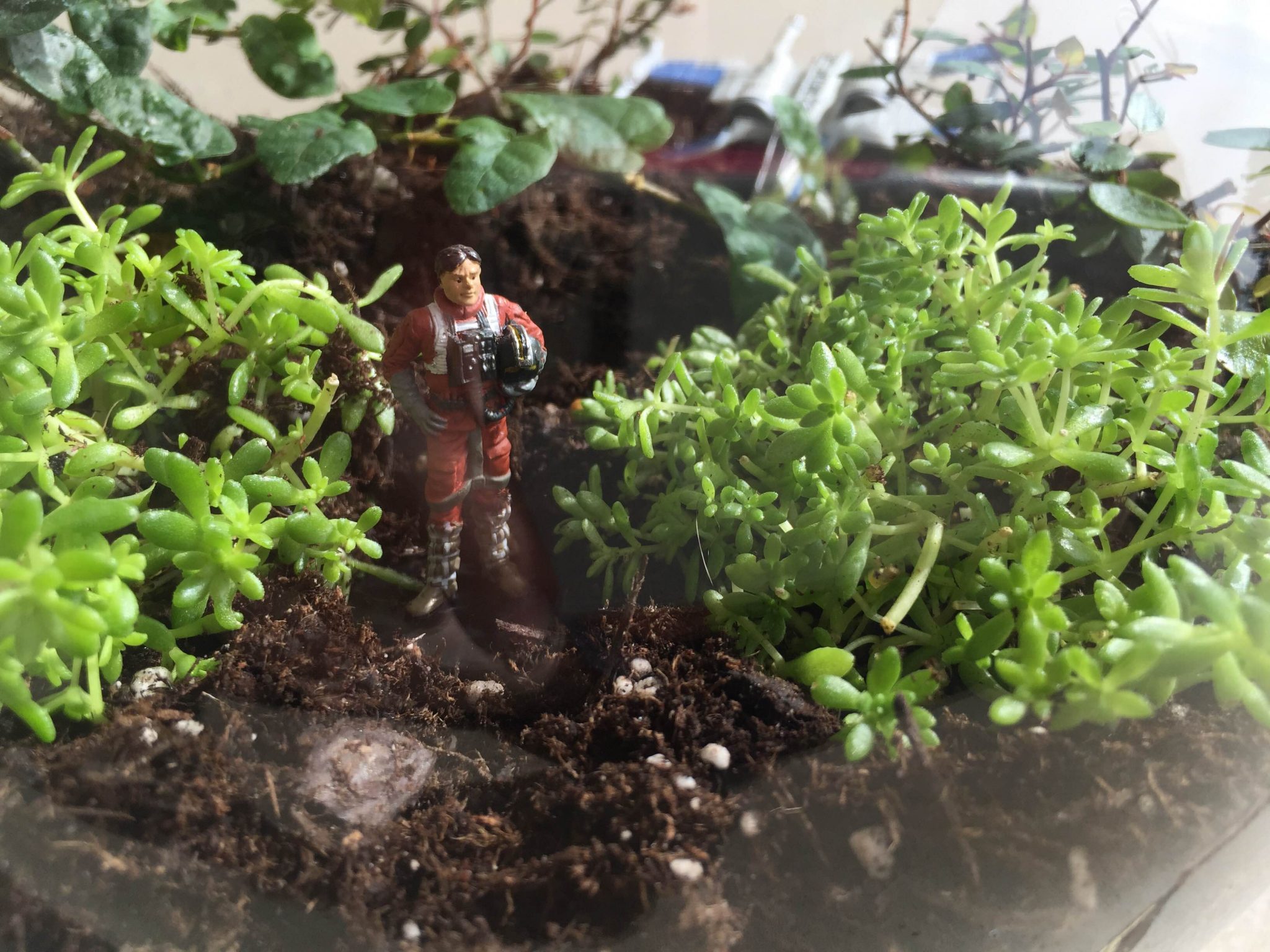