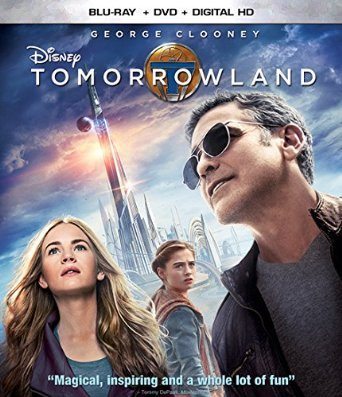 I know that Tomorrowland got pretty mixed reviews but I’m going to let you guys in on a little secret. I kind of loved it. At a time when most of our pop culture and media seems to be inundated with darker storylines, Tomorrowland was like a breath of fresh air.

This is one of the primary reasons I liked this movie as much as I did. It wasn’t just more of the same but instead Tomorrow offered a real sense of hope for the future. Therese thought it was a bit heavy handed in it’s optimism but that just felt like part of the story. In a world so accepting of chaos and the sort of horrible things we seen on the news every day sometimes I feel like you need to have a little optimism thrown in your face..

The message wasn’t the only thing I enjoyed about the movie, though.

Tomorrowland has an amazing ensemble cast of well-known heavy hitters and relatively unknown but talented newcomers. The movie also makes some unusual casting choices – such as Tim McGraw as Casey’s father – and yet they don’t seem unusual when you’re watching. Everyone plays off of one another so well. It really draws you in to the story. George Clooney and Hugh Laurie are fantastic but it’s often young Britt Robertson and Raffey Cassidy who steal the show.

Honestly, I’ve been wanting to re-watch Tomorrowland for a while now. I like the optimism. I like that Disney is asking people people to embrace the future and imagine new possibilities. I also just really like George Clooney and Hugh Laurie acting against one another.

So needless to say I’ve been waiting anxiously for the blu-ray release.

Fortunately, it was more than worth waiting for because the special features really add a lot to the experience. I loved how hopeful the movie was in the end and seeing just how much Brad Bird and the rest of the cast and crew embraced that feeling was really cool. Tomorrowland has some really great special features that go a long way in building on the film.

Remembering the Future: A Personal Journey Through Tomorrowland
One of the best features on the blu-ray release, Remembering the Future is a really great inside look at what the future really means. Brad Bird is our narrator and he takes us through his personal, childhood love of the wonder that came from seeing the real Tomorrowland rides at Disney through the production of the film. Bird made sure everyone truly understood the message of Tomorrowland, even taking the cast out to NASA for a rocket launch. It was really cool to see how everyone came together for the film and really embraced the story.

Oddly, the blu-ray also features another, separate bonus feature called the Brad Bird Production Diaries. Much of the footage from the NASA trip is the same and it makes me wonder why those two short videos weren’t added into Remembering the Future. Who knows!

Deleted Scenes
Always my favorite part of any home release, the Tomorrowland blu-ray includes six deleted scenes. A lot of them are really great scenes that would have been great if they had remains in the movie. Some are pretty basic scenes you’d expect to see cut. Other scenes, show just how much the movie changed. At one point, Casey’s family was much larger. Her mother was still alive, she had additional younger siblings, and her uncle’s family was living with them, too. Talk about big changes! One of the cutest scenes – and one that admittedly was just fluff more than anything else – features a little Casey during a science faire in her childhood. Super cute stuff. Definitely worth a watch!

Casting Tomorrowland
I wish I could think up a movie, come up with my dream cast, and be lucky enough to get so many of them on board. The cast of Tomorrowland is one of the movie’s greatest strengths and this feature takes us through the whole process of finding the right actors for all of the movie’s most crucial parts. In particular, they focus a good bit on Raffey Cassidy whose performance as Athena really shines. That’s one talented kid.

A Great Big Beautiful Scoring Session
All right, I have another secret for you guys. I’m a super sappy person. I love watching emotional, sentimental featurettes on blu-ray releases. This is definitely one of them. Michael Giacchino penned the majority of the score for Tomorrowland but featured in the film are two classic Disney songs, “There’s a Great Big Beautiful Tomorrow” and “It’s a Small World.” These classics were penned by the Sherman brothers who were really responsible for a number of the early Disney songs we all know and love. Giacchino has Richard Sherman come out to a session so he can see them play one of his songs but it’s more than that. It really seems like a great experience for everyone. They say you shouldn’t ever meet your heroes but sometimes it works out.

The World of Tomorrow Science Hour
Hosted by futurologist David Nix, this was a fictional morning show in the Tomorrowland universe. The idea was that at some point in the 1960s David Nix would have hosted an educational program to inspire young people to embrace scientific advancement. Of course, Nix isn’t exactly the most child friendly person out there and it goes about as well as you’d expect. Still, it’s pretty fun to watch the whole thing fall apart. Nix is so snarky; it’s like watching a more diabolical, focused House at work!

The Origins of Plus Ultra
Portrayed as a mysterious historical document, The Origins of Plus Ultra tell the story of the early days of Tomorrowland. It was apparently meant to be shown at a World’s Fair sometime in the 1960s but it never actually saw the light of day. As we learn in the movie, the people of Tomorrowland decided against welcoming all of mankind. But at the time this video was supposedly made that was still the plan. It’s a recruitment video for the first generation of Tomorrowland designers and it’s rather hopeful. If you ever read the tie-in novel Before Tomorrowland by Jeff Jensen, Jonathan Case, Brad Bird, and Damon Lindelof (yes, that’s a lot of authors, I know) the short animated feature feels a lot like the comic that was handed out during the World’s Fair Lee Brackett and his mother attend in 1939. It’s a good bit of backstory for the film.

Blast From the Past Commercial
Another piece of in-universe media, the Blast from the Past commercial is an actual commercial meant to advertise the ill-fated sci-fi store from the movie. It’s a quick short but it’s more than worth a watch if just for more of Keegan-Michael Key and Kathryn Hahn’s crazy antics. These two were not in this movie long enough. (But they were perfect for the brieft amount of time they were.)

Disney does a pretty great job generally when it comes to adding special features into their movies. But the Tomorrowland release is especially well put together. The added bonus features giving further insight into the world of Tomorrowland are incredibly fun to watch. The World of Tomorrow Science Hour, The Origins of Plus Ultra, and the fake commercial in particular stick out for me.

One of Therese’s complaints about the movie was that we don’t get to spend a whole lot of time in Tomorrowland. While these bonus features don’t necessarily see us soaring through the air among the majestic skyscrapers of the titular city, they do give us some background as well as a different perspective on various characters and aspects of the film.

Honestly, I think Disney nailed it with this one. I enjoyed the movie already but the special features did exactly what they should for any movie – they made things just a little bit more fun. Admittedly, if you didn’t like the movie initially you probably won’t find the special features as entertaining as I did. But if you did enjoy it, they won’t disappoint!

A REVIEW COPY OF TOMORROWLAND ON BLU-RAY WAS PROVIDED FOR THE PURPOSE OF THIS REVIEW. NERDOPHILES WAS NOT COMPENSATED FOR THE REVIEW AND THE OPINIONS HERE ARE OURS AND OURS ALONE.