“Pan” Struggles to Bring Back the Luster of a Classic 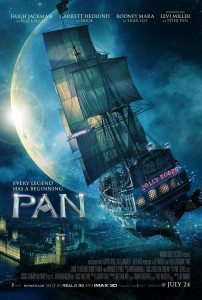 J.M. Barrie’s Peter Pan returns to the big screen in the form of a prequel detailing the origin story of Barrie’s timeless (and ageless) protagonist, Peter. The film itself is visually entertaining–if a little heavy on the cgi–but is lacking in any real substance. Essentially a feel good story, it pits Peter, a orphan living during the London Blitz, against a kidnapping pirate. The twist is, of course, that the pirate is Blackbeard and after he is kidnapped to work in the mines of Neverland, he meets and befriends James Hook.

Essentially using the kids he kidnaps as slaves to mine the precious pixie dust out of the earth, Blackbeard leads a gang of fearsome pirates, who also seem to enjoy Nirvana, as they break out into a rendition of “Smells like Teen Spirit” as the boys arrive in Neverland. No, that sentence is not a joke. They literally break out into a capella. Fearsome indeed.

Peter’s origin story plays out alongside Hook’s, and while the film shows a more dishonest and self-serving side of a young Hook, he is essentially a roguish hero. While ABC’s Once Upon a Time has made us no stranger to a heroic Captain Hook, there doesn’t seem to be a motivation at the end of the film that leads him towards the eventuality that will make him Pan’s enemy.

Semantics aside, this was my biggest gripe with the film. Caught between creating an origin story for Peter and the fairies, the movie pushes aside the potential of elaborating Hook’s origins as well. Instead, Garrett Hedlund plays him as dark and broody but somewhere over the course of the movie changes him to overblown and boisterous. He suddenly starts talking with an exaggerated tone that makes him sound more like a cowboy than a pirate. It’s disappointing to see the lost potential of this character as a result.

A lot of the controversy surrounding the film had to do with the casting of Rooney Mara, a Caucasian actress, as Tiger Lily, traditionally a Native American character. However, Mara’s performance was one of the more charming performances in comparison to Hedlund and a lukewarm Hugh Jackman. Her character guides Peter after he and Hook escape the mines and also plays off of a romance with Hook.

While Mara and Hedlund do have some chemistry, she manages to highlight Levi Miller’s Peter the most and helps him to show some depth in acting with their scenes together. Miller is convincing as a young Peter, though his motives are pretty singular and become a weakness when facing off against Blackbeard or even when arguing with Hook.

Pan ends on a high note, with Peter bringing the beginnings of the Lost Boys back with him to Neverland. It’s an interesting addition in making the nuns of their orphanage particularly nasty; it helps soothe the idea that Peter is actually doing the same thing Blackbeard was doing except instead of taking the kids from one hell to another, they’re just going to Neverland to have fun.

The implications of pixie dust do present some interesting problems as Blackbeard’s motives to collect more of it is to gain immortality. In a scene that makes pixie dust seem more like cocaine, he addictively breathes in the glittery substance and takes decades off of his life. If we follow the original canon that Lost Boys never grow up or grow old in Neverland, then we can assume this means that all of these kids are essentially inhaling this fantastical drug.

Not without its problems, Pan‘s only redeeming factor is that it is visually creative and will at least be a fun watch for families. The Natives who are killed explode into colorful dust rather than slowly bleed out, there are comedic villains and bright colored sets, not to mention an excess of CGI floating ships, fairies, and Cara Delevingne mermaid triplets (seriously, there are three mermaids and all of their faces are Cara).

Final Thoughts: It’ll certainly keep your kids entertained, but perhaps that’s all that it will do. Pan does little to add to the classic tale by J.M. Barrie and fails to make an impression that lasts.