‘Everest’ Shows You Not To Mess With Mother Nature 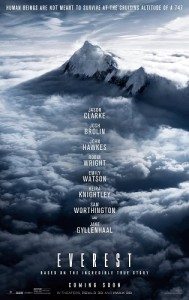 How far can you push the human body when climbing at the altitude of a flying 747? This question is answered in the newest thriller, ‘Everest.’ The newest movie details the events that transpired during the disastrous 1996 Summit Expedition to Everest – the highest mountain in the world (29,029 feet). The narrative mainly follows two expedition groups – Rob Hall’s Adventure Consultants (Jason Clarke) and Scott Fischer’s Mountain Madness (Jake Gyllenhaal); they were both commercial climbing groups.

The logistics and time required to summit (if you summit) Everest is astounding. The hike alone to get to Base Camp can take 20 days, going from 9,250’ to 17,500’. You have to acclimate to the altitude change otherwise it can result in sickness. Then it’s a 2 month stay at Base Camp with acclimation climbs throughout those two months. This venture is not for the weak-minded.

‘Everest’ brushes over these facts and merely shows you glimpses of the training the group goes through. You learn a little bit of backstory from each of the characters, but never too deep. The acting was good but I think the situations the actors/actresses were placed in made the movie worthwhile. Everyone shares a common goal and that is to get to the top. That one burning desire is what fuels the movie and passion. There are a few tear-jerking moments and the feeling of utter hopelessness.

The scenery and cinematography is breakthtaking. You really feel like you are on the mountain, feeling the high winds, and frigid cold air. You’re right there crossing the rickety ladder over a bottomless crevice. You feel like you can die any second because the weather can change so suddenly and you’re SOL.

You feel the struggle the climbers are going through, do you leave the person to die or help and potentially die with them? It’s an inner moral battle that one fights when taking on the brutal force that is Mother Nature. Most people will say ‘screw that I’ll never do it,’ but some people will have that nagging voice asking them what if? Either-or, while Mother Nature is absolutely beautiful, she does not give a f*ck and neither does the stone-faced helicopter pilot (you’ll see what I mean when you watch the movie).

Final Thoughts: Everest is a riveting movie that has very heartbreaking and very ‘oh my god my heart is going to pound out of my chest’ moments.

IMAX 3D Worth It? Yes, very much yes. You feel the HUGE size of the mountain and it becomes a very immersive experience. This type of film demands to be viewed in IMAX…or if you want to save a few bucks go to a Harkins Cine Capri (if you’re in an area with Harkins Theaters).