Odditorium is a Fantastical Middle Grade Adventure for All Ages! 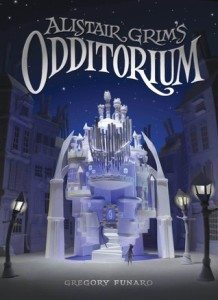 Okay, let’s get down to the nitty gritty. Odditorium is told from the perspective of Grubb, “spelled like the worm but with a double b, in case you need to write it down some day.” He’s a twelve or thereabouts year old chimney sweep who hasn’t had the best lot in life. After a slight misunderstanding and a quick stowaway, Grubb finds himself in the Odditorium, also known as the house of Alistar Grim. Mr. Grim offers Grubb a job, place to live, and food in exchange for Grubb never speaking of what goes on inside the Odditorium. Naturally Grubb agrees because it’s either this, or the workshops that are notoriously bad places.

However, he does not realize that by agreeing, he’s entered a world where the odd is normal, and  the normal odd. You see, the Odditorium just happens to be a house that can fly, and is powered by a force called animus. When Grubb accidentally allows some of the animus to escape, havoc begins as Prince Nightshade, an evil magician of sorts, hunts down Grubb, the animus, and the Odditorium. In a place where fairies are real,  banshees play tricks, and a pocket watch is his best friend, will Grubb and his friends be able to defeat the prince? Or will he too, become part of the dead army of Prince Nightshade?

This book caught my attention from page one. The style is very Lemony Snicket in the dark undertones, large words, and general flow, but with a dash of Harry Potter tossed in. Don’t let that make you believe this is just another magical kids’ book to pass over though, Funaro brings a new twist to the table. His prose sucks you in, and before you know it, the book is over, and you’re left waiting and wanting for the next. He does a wonderful job of taking to this world, and creating a sense of awe and wonder at every turn.

If we are looking for things that are potentially hazardous to your enjoyment to this book, there is a lot that is tossed at the reader at first. The themes are a little more mature than the average books found for late elementary to middle school aged readers. As an older reader, the main plot twist was foreseeable, however how we got there wasn’t so much. Honestly, those are my only complaints, and they really aren’t even complaints.

Overall, it is a fantastic book that I would, and have been, recommending to readers of all ages. It is fun, dark, surprising, and whimsical in all the ways one could hope a book about a chimney sweep with a worm’s name could be. It is a must read for all fans of fantasy, Disney, and books. Plus, there are pictures in the book that are pretty damn sweet.

I’m not going to lie, shortly after finishing this book, I picked it up and read it again. It was that good. Also I was looking for things to nitpick so this review wouldn’t be overly fangirl. This is just one of those books that is so good it’ll keep you reading way past your bedtime. If it doesn’t get turned into a movie (preferably directed by Burton), I will be sorely disappointed. I loved it, it will forever remain on my shelf. Go out and get this book as soon as possible. It’s well worth the read.

Our thanks to Greg Funaro for sending us a copy of his book to review! Nerdophiles was in no way compensated for this review and our thoughts are ours and ours alone.