The Start of the Red Revolution Promises Thrills 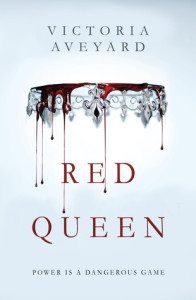 Mare Barrow is just an ordinary girl from the Stilts. She’s Red just like everyone else who lives in the Stilts and is facing being conscripted into war on her 18th birthday, just like all the other kids with no talent or skills, and just like her brothers. She does what she can, stealing to keep her family fed, with electricity, and giving all she can to her much more talented younger sister. Until one day, they devise a plan that would save Mare and her long time friend.

Red Queen is one of those books that feels like reading an old standby friend. It has adventure, magic, romance, and the potential of societal revolution. One of those great books, that will hang out on your bookshelf after reading, just to be read later before the next one comes out. It’s enjoyable in all the ways magical dystopians are, and is just twisty enough to keep you wanting to read past bedtime.

Aveyard’s first novel is a good one, beautifully written and dynamic. Her storytelling brings you back for more and will leave you on the edge waiting for the second one to come out. However, parts were very generic dystopian, but if you love a good story that shouldn’t deter you. It’s worth the hype, reviews, and mild fangirling that has been happening in the various book circles.

Final Thoughts:
I truly enjoyed this book. I really did not think I was going to, because typically if it has a high hype factor, I tend to dislike them (see Vivian Apple), but this one was actually good. It honestly was like reading a book I’ve read and liked before. A good afternoon read.