Raise up your mugs of mead, but keep a wary eye out for charming old conmen!

After spending 15 years incarcerated in production hell, Neil Gaiman’s American Gods is finally getting greenlit by Starz. The criminally masterful mind of show runner Bryan Fuller (Hannibal, Pushing Daisies, Heroes) will be teaming up with scribe Michael Green (The River, Kings, Heroes) for the series. Neil Gaiman himself will also serve as executive producer.

Casting Shadow Moon, the laconic ex-convict protagonist, will be the first move of American Gods.

Fuller took to Twitter in recent days to unveil concept art that the Nerdist has gleefully (and accurately) described as “Fulleresque.” 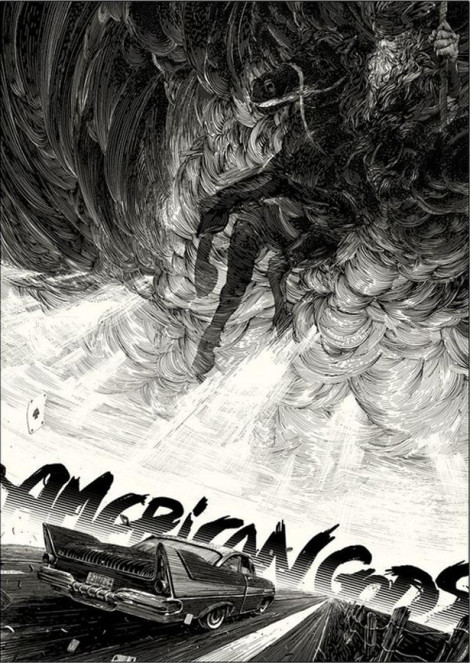 For those unfamiliar with the 2001 novel, stop reading this announcement, tear yourself out of your computer chair and run, not walk, run to your nearest independent bookstore and buy it and read it. I expect a book report by Monday.

Seriously, it’s a delightful magical realist book inspired by Neil Gaiman’s own experiences driving across the United States – only there happens to be a serious war against a cast of “Old” gods (Bali, Odin, Anansi, etc.) against the modern, corrupt gods of celebrity, greed and techno obsession.

Starz has enjoyed the reputation of being the premiere destination for quality book-to-television adaptations (we’re fans of Outlander here,) so this will undoubtedly be a happy and satisfying creative marriage for fans and newcomers of the novel.