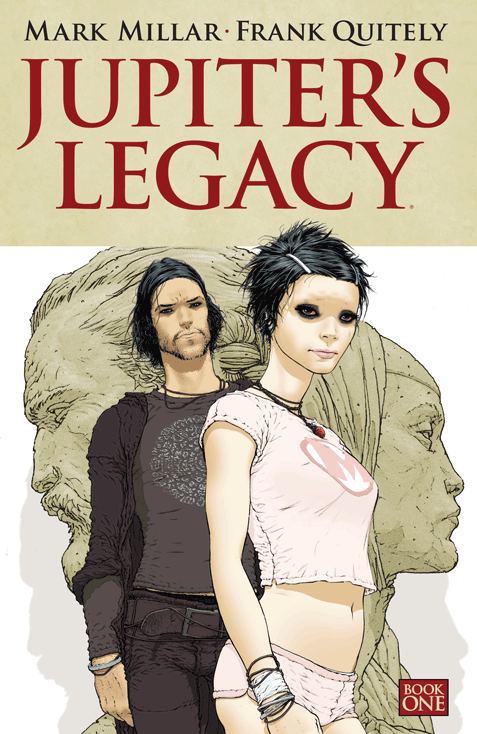 It just sometimes takes a generation.

That’s the basic premise behind Jupiter’s Legacy. After a group of friends looking to save the world are bestowed superpowers they spend decades trying to make the world a better place. They battle supervillains, respond to natural disasters, and do their best to protect the American way of life. Then their kids come around and turn into entitled assholes living in a world that worships superheroes.

Imagine being a parent disappointed in your normal kids.

Now imagine your kids have superpowers and could be saving the world and instead choose to sign endorsement deals for energy drinks.

That’s what these heroes are dealing with. Their kids are partying and making bad choices. Dating bad guys. It’s such an incredibly interesting dynamic. Then things take a turn and those entitled kids just snap – manipulated by an egomaniacal member of the original superhero team, they brutally murder that earlier generation.

Luckily, at the same time, some of them also wise-up.

And there’s at least hope for the next generation.

This first volume is split almost in half. The first half focuses on the way things are up until these superpowered kids betray their parents while the second half focuses on the aftermath. Party girl Chloe, whose brother Brandon murders their father, hides away with her boyfriend and son for years trying to hide from an unbeatable force of their former peers. But they learn the hard way you can’t stay hidden forever.

What’s really going to matter going forward is how they react to that.

I loved this book because it’s really just a super messed up family drama at it’s core. We’ve got a brother turning on his brother and a son murdering his father. Honestly, these betrayals are absolutely jaw dropping as they unfold.

There’s also just so much power in play. These families were so powerful that to some it probably felt inevitable that there would be in-fighting. But it’s still jarring. Could you really murder your own parent just so they wouldn’t stand in your way and keep you from ruling the country with an iron fist?

Superheroes should never be in charge; they should always be the people on the street-level making things right. That’s how we usually see them. But that’s not how they would necessarily see themselves realistically and Jupiter’s Legacy really embraces that idea. If people really did have immeasurable super powers are they really likely to just sit back and save cats from trees? Not all of them. But the real joy in this book is seeing them seize that power, seeing them fail, and seeing what comes next.

I love how much this story drew me in. I wasn’t sure of it at first, I’ll admit. The art style is a little iffy but it grew on me. It works well with the classic feel they wanted to portray in this book. It looks good. The writing is good. Honestly, it’s a solid book all around. Coupled with a great gallery of stunning cover variants at the end (seriously, Phil Noto blows me away no matter what he’s doing), it’s a really great release.

I cannot wait to pick up the second volume of Jupiter’s Legacy because the ending really sets up a great point from which this story can building upon. If you can get your hands on this book – do it.

A review copy of this title was provided by the publisher and Diamond Book Distributors via NetGalley in exchange for a fair and honest review.