Go “Into the Woods” from the Comfort of Your Own Home

Into the Woods
[Blu-Ray] 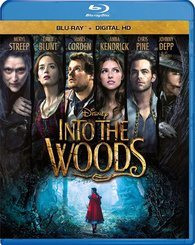 This week saw the release of Disney’s film adaptation of Stephen Sondheim’s Into the Woods. I have been waiting for this release for so long! I missed the movie in theaters and after hearing how so many of my friends had enjoyed it waiting has been utter agony. Thankfully the wait is over!

Into the Woods did not disappoint!

I absolutely loved it and I have had the soundtrack stuck in my head for days. I may or may not have watched this movie a good three times before sitting down to write this review. That’s how much I enjoy it!

If you’re not familiar with the movie – or the musical on which it is based, Into the Woods is series of intertwined stories localized around a common setting strung together by a baker and his wife’s quest to undo an evil witch’s curse. Various familiar characters come together throughout the movie – including Little Red Riding Hood, Cinderella, Rapunzel, and more – in ways you could never have imagined. The music is equally unique and intertwined and the film does a fantastic job of capturing the whole story.

Disney did a great job with the home release, too.

The special features for Into the Woods are great and (unlike some other releases) anything but filler. Each one is almost ten minutes long if not longer and incredibly illuminating.

Here’s a look at what you’ll be getting and why you should be excited!

Theres Something About the Woods is a short feature that is almost as complex and complicated as the Into the Woods opening number. The filmmakers explore just how ‘the Woods’ came to be and how they influence every aspect of the story. ‘The Woods’ set the whole tone for the story and they all hold that idea of the woods in really high regard. (After all, anything can happen in the woods.) We’re shown how they had to find a way to harness that feeling in creating their intricate and stunning artificial sets, haunting scenes, and spectacular transitions from the interconnected fairy tale stories. But more than that we’re shown how it seeped into every other part of the movie. I was particularly fascinated to see how they build Meryl Streep’s costumes in keeping with the wooded influence. But really the most incredible part is seeing them building trees – and an entire wood – from scratch.

The Cast As Good As Gold is so cute! I mean, that’s the best way to describe it. It’s basically ten minutes of the cast and filmmakers talking about how much fun they had making this movie. Or how much they loved how everyone brought their characters to life. Also: how much Tracey Ullman loved the cow. Seriously, you’ll smile a lot watching this one. Everyone just has such positive things to say about one another and the whole experience of making the film.

“She’ll Be Back” is the only deleted scene we get from Into the Woods. That makes sense – it’s hard to delete scenes from a musical! The scenes – and accompanying musical numbers – tend to be important. But Stephen Sondheim himself wrote “She’ll Be Back” for Meryl Streep and it was initially intended to be placed in the final film immediately after Rapunzel leaves for good. The Witch’s song is very sad; she is in many ways like a mother who has lost her child for good and she grapples with that knowledge and a stubborn belief that someday the girl will realize just how right she was and that the world is a terrible place. Unfortunately – as good as the song is (it’s by Sondheim!) – it didn’t work for the film and was cut.

Lastly, we have the Deeper Into the Woods – a series of segments focused on the making of the film. These are probably the coolest of the special features because they give you a really in depth look at certain aspects of the film. The high school musical nerd in me really loved seeing how things came together behind the scenes.

Besides the video special features, the blu-ray release comes with a few other added bonuses. One of these is the ability to jump to the various songs in the film and sing-along – with lyrics! Another are a series of easter eggs hidden in the menu. Can you find them?

Throw in the filmmakers’ commentary and you’ve got a really well rounded series of special features. Really, this release throws in exactly the sort of extras I wanted, these are some of the funniest special feature videos I’ve come across in a while. Everyone is so enthusiastic about the film, and the featurettes aren’t just fun – they are enlightening. Plenty of movies can show people talking up each others’ praises, but the Into the Wood‘s special features really bring you into the movie making experience.

Definitely pick up the blu-ray release if you can! The special features are awesome and well worth the watch. Plus you get the digital copy with the blu-ray so you can take Into the Woods with you everywhere courtesy of Disney Movies Anywhere. (Seriously, I watched it at work today! Everyone was jealous.)

A REVIEW COPY OF INTO THE WOODS ON BLU-RAY WAS PROVIDED FOR THE PURPOSE OF THIS REVIEW BY FINGERPAINT MARKETING AND DISNEY. NERDOPHILES WAS NOT COMPENSATED FOR THE REVIEW AND THE OPINIONS HERE ARE OURS AND OURS ALONE.