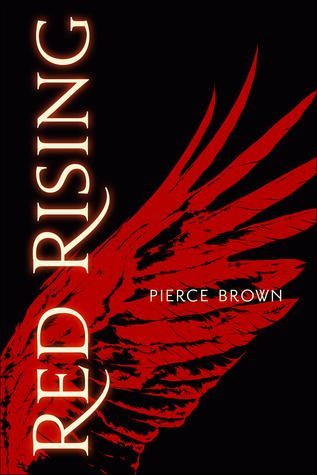 This review has been a long time coming. Red Rising has been one of my favorite books pretty much from the second it came out but it’s also been the hardest to write a review for because I love it so much and I have such high esteem for it’s author Pierce Brown. I just really cannot recommend this book highly enough. And I feel like I need to say that up front. Red Rising is a book I will recommend to almost anyone. I say almost anyone because it is a science fiction book and I know that’s not really everyone’s cup of tea.

But it’s just… it feels like so much more than that to me.

Initially marketed as something akin to Ender’s Game and the Hunger Games, I’ve always felt that was an unfair comparison. This book is so good that it’s better than some attempt to make it seem like something else and I’m so glad that subsequent releases have dropped that wording from the cover. I refuse to use anything like that description when speaking to people about Red Rising because you know what? I almost didn’t read it myself because of that. I didn’t want to read ‘the next Hunger Games.’

I’m so glad I took the chance, though, and read it anyway.

Red Rising follows a young man named Darrow who has spent his life living underneath Mars doing hard labor preparing the planet for the arrival of colonists… or so he thinks. Unknown to him there is a society on the surface that has been essentially enslaving them for generations. After his wife’s execution he escapes to the surface to join up with rebels intending to take down the rest of the society that has bound itself with inescapable color-themed casts. But it won’t be easy. The elites value nothing more than brutality and power and Darrow has to not only convince them he is one of them but that he is one of the most ruthless.

Darrow goes through an incredible internal journey throughout the book as he grieves and ultimately transforms himself. He makes alliances with the people he’s sworn to destroy. He’s faced with incredible circumstances for which even he knows his life before has not prepared him.

The book was initially sort of marketed to the YA crowd but has more than earned it’s proper adult science fiction label since finding an audience and showing it’s worth. Darrow is not just a teenager. In his society he was an adult; married and planning on building a family. Despite the harsh circumstances he was happy. And, honestly, it’s that part of his character that makes all the difference. He’s determined but still makes mistakes. But unlike your stereotypical YA protagonist his mistakes aren’t obvious and annoying. You feel for the guy. You don’t envy his predicament. And it’s just as hard for you to really know the good guys from the bad guys as it is for him.

Red Rising proves why people have been calling Pierce Brown an author to watch. He blends great storytelling with phenomenal writing. I will – from this moment on – read everything he writes and know even before I star that I will love it.

I can’t wait to get through Golden Son next!

A REVIEW COPY OF THIS BOOK WAS PROVIDED BY THE PUBLISHER FOR A FAIR AND HONEST REVIEW.