No video this month, because of time constraints. But I took a bunch of pictures. 🙂

Loot Crate and Nerd Block are two very big subscription box companies. They both have a large fan base and they both consistently give out awesome product in their boxes. Loot Crate costs $13.37 a month plus shipping which comes out to be around $20 a month. Meanwhile, Nerd Block costs $20 a month but, since it ships from Canada, costs close to $30 after shipping. Regardless of which one you get, each box’s content always adds up to be more than what you initially paid for. Another perk is that you get to collect nerdy t-shirts. Loot Crate will have a few t-shirts throughout the year in their boxes, while Nerd Block has a shirt in every box (this could be the reason for the more expensive price).

Now…on to the January haul!

This month’s Loot Crate theme was Rewind. Throwing it back to the oldies and getting some retro in there. For a geeky night out on town you could wear the sunglasses, t-shirt, and tie. It wasn’t a bad box, not as impressive as previous ones. 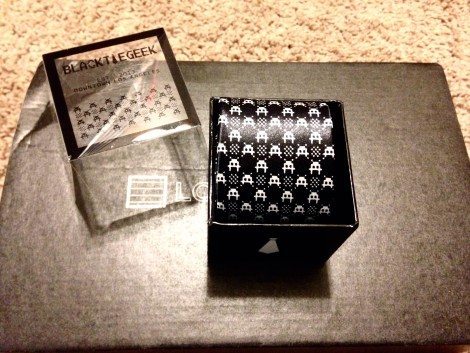 Exclusive: Retro Arcade Skinny Tie – feels like silk and has the space invades arcade game printed on it. You can use it like a headband or wear it for its intednded purpose and look snazzy. 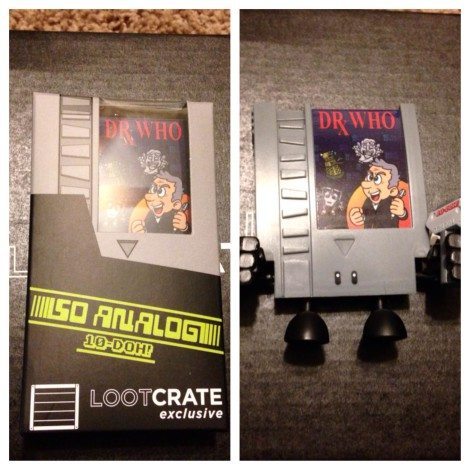 10-Doh! Figure. There are six different ones to collect and I go the Doctor Who one. Too bad you can’t actually play them on your Nintendo – I know you still have one. 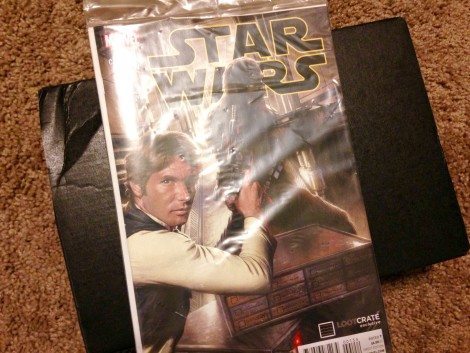 Star Wars Comic Book Issue 001 – An awesome drawing of Han Solo and Chewie on the front cover. What’s the story going to be about? Hmmm. 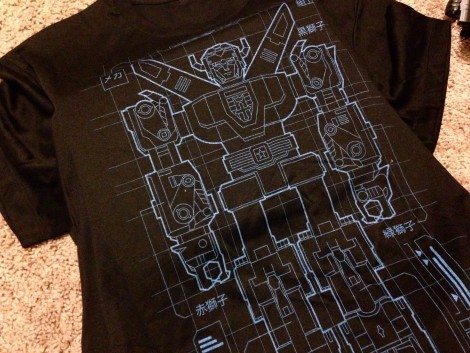 Voltron Blueprint T-Shirt – This is one awesome looking t-shirt, and it’s super soft. Now that you have the blueprint, get out there and build a robot. 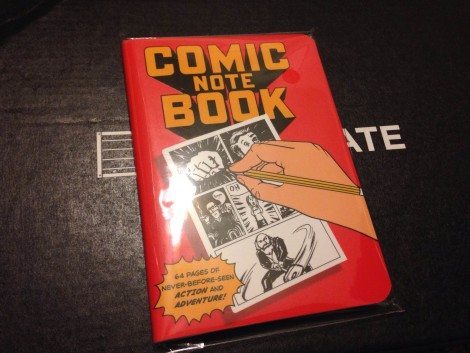 Comic Notebook – This is a notebook that has blank comic book panels as well as stencils to make your own dialogue bubbles and other actions. It’s 60 pages so start creating. 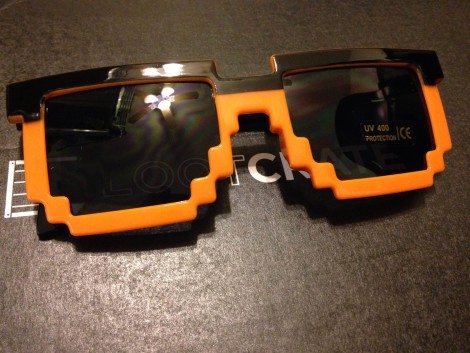 8-Bit Sunglasses – Protect your eyeballs from the UV rays with these half-tone sunglasses. 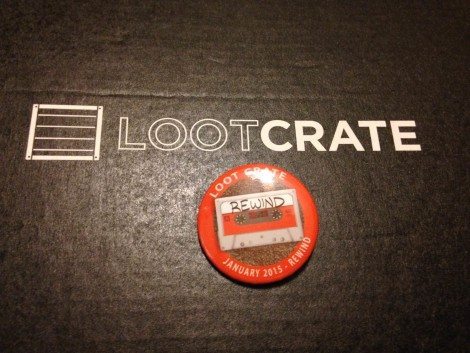 And of course, you can’t forget the commemorative pin.

Nerd Block started doing themes which is actually pretty nice. There theme this time around is A Galaxy Far, Far Away…let’s see how well they did. 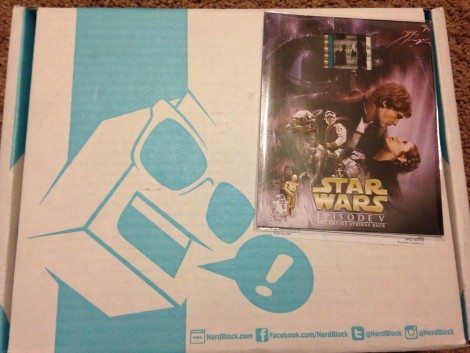 Star Wars Episode V: The Empire Strikes Back FilmCell – This collectible is an actual 35mm frame of the film from the movie. The scene I got is when Han Solo, Leia and the gang arrive at Cloud City and then the door opens and Darth Vader appears. 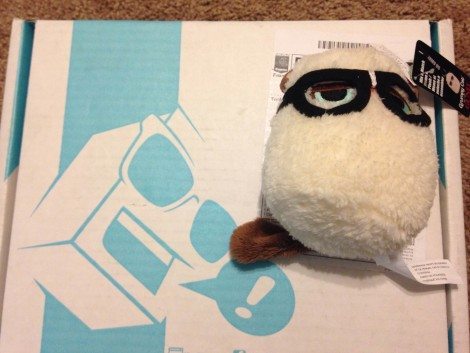 Grumpy Cat – This adorable, squishy plushie is the perfect size to hang from a lanyard and display thy grumpiness. 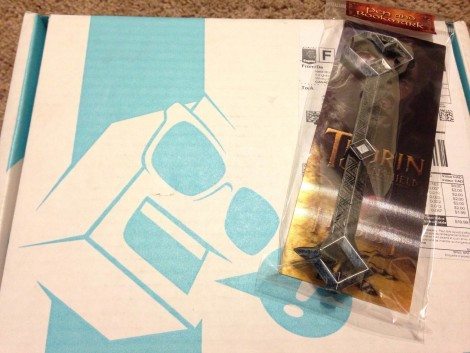 Hobbit Pen & Book Mark – The key that Gandalf gave Thorin Oakenshield turns into a pen and the handy bookmark will keep your place in whatever adventure you’re reading. 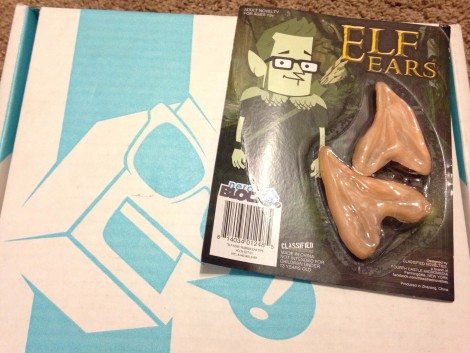 Elf Ears – Blend in with the elven community with these ears…use spirit gum perhaps to put them on? I have no idea…this will be fun, probably will mess them up and glue them to my nose or something. 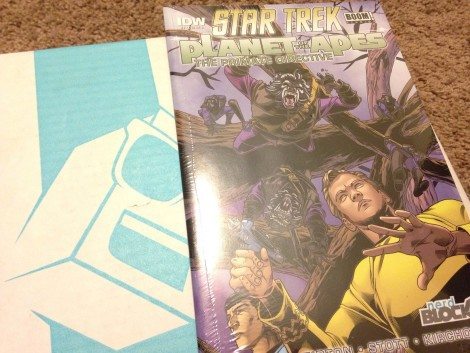 Planet of the Apes/Star Trek Comic – A cross over….this will be an interesting story. 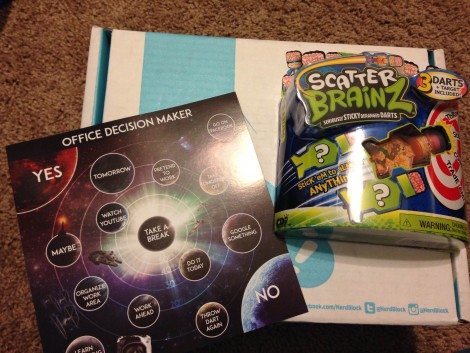 Scatterbrainz Darts/Dart Board – The tip of these darts have a soft, gummy brain that will stick to anything it’s thrown at. So if you’re feeling overwhelmed with making a choice, then throw the darts at the decision maker board to get an answer. 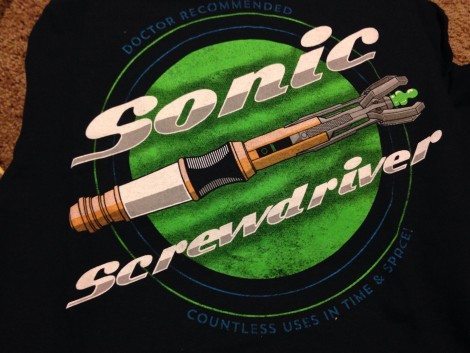 Sonic Screwdriver T-Shirt (Doctor Approved) – Ever wanted to have a handy dandy sonic screwdriver with you at all times? Well, now you have one, but you’ll have to wash it to keep it from smelling. The t-shirt is a nice hardy material, not as soft as the Loot Crate one, but still has an awesome graphic.

The Winner? I say it’s a tie. I do like that Nerd Block has themes now because it makes the box more cohesive. I like the clothing items in Loot Crate because I’ll use them. The Hobbit Oakenshield pen will be used and so will the dart board. And of course I’ll wear both the t-shirts.

But hey! Don’t just take my word for it.

Try both out, see which one you like. You won’t be disappointed either way! (Or if you are you’ll know which one was disappointing.)