From trades, to single issues, to one-shots, to ongoing series, we can’t get enough of comics! Nerdophiles does its fair amount of coverage for comics, but the industry is big and we have barely even scratched the surface here. We’ve got just some of our personal staff favorites picked out from 2014. If you haven’t had a chance to check these out yet, here is our official stamp of approval. So what are you waiting for? Get out to your local comic book store and pick some of these up! 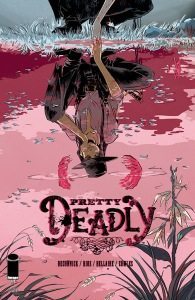 I’ll confess I am late to the party with this one. I didn’t manage to fully read Pretty Deadly until Volume 1 of the trade came out this year. Kelly Sue DeConnick and Emma Rios weave an absolutely beautiful series that recalls elements of the supernatural and the Western genre together into a fascinating tale. Big Alice and Deathface Ginny are both charismatic and enigmatic characters that are brought to life through some fantastic storytelling. I have to give my applause for the art though, as it is absolutely stunning. It’s a must read for Western lovers (especially fans of East of West) and brings all the allure of the mythology of death with the obligatory heavy dose of Danse Macabre. — Picked by Therese & Ashley 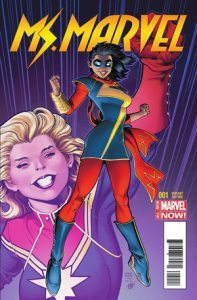 It would be pretty much impossible for me to leave this comic off of our list. It was big news when it was announced that Kamala Khan – a Muslim girl of Pakistani descent – would be taking up the Ms. Marvel mantel. But that’s not why I put this on our list here. I put it on the list because, since it’s debut in February, Ms. Marvel has consistently been one of the best titles on Marvel’s on-going roster. It’s fun. It’s quirky. It’s riddled with pop culture references and geared towards attracting new readers – especially young girls. Kamala Khan is essentially every single Marvel fangirl wrapped up into one adorable crime fighting package. And it’s awesome. — Picked by Sam & Ashley and Cody

The Wicked + The Divine from Image Comics

When The Wicked + The Divine was announced in January, I was initially kind of upset with the creative team of Kieron Gillen and Jamie McKelvie. Only because I have been waiting for the third installment of their other series Phonogram for so long. By December, I don’t think I could imagine my life without The Wicked + The Divine. Revolving around the concept that every 90 years, 12 gods come back to Earth and possess the bodies of teenagers before dying two years later, the series is a slick and gorgeous take on pop stars, fandom, crossing over from being a consumer into a creator, and mortality. Not to mention it is probably the best work McKelvie and colorist Matthew Wilson have done up until this point. Once again we return, and it’s a place I’m loving returning to every month. — Picked by Ashley 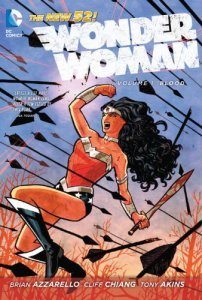 What a refreshing take on Wonder Woman! This reboot gives us all of the grit, gore and warrior thinking you would expect from an Amazonian Princess. Azzarello doesn’t just give us what we expect from the Diana of days gone by, instead he uses the lack of knowledge we have on her past to expand more of her back story. He also pulls readers in with the lure of traditional Greek mythology and stories reinvented for the modern age. From the story to the art work, Wonder Woman of the New 52 does not disappoint. — Picked by Rebecca & Cody 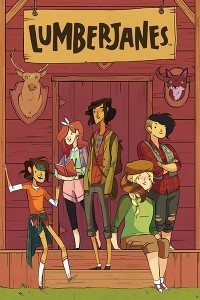 FRIENDSHIP TO THE MAX! In a year full of wonderful comics lead by young women, it felt like Lumberjanes was leading the charge along with Ms. Marvel. Feeling like what would happen if you made a smoothie out of Buffy The Vampire Slayer, Gravity Falls and lady-led punk rock, Lumberjanes is focused on six best friends in the middle of a strange summer at scout camp. It was initially going to be eight issues long, but the popularity the series got it promoted to ongoing after only two issues. People wanting and loving an all-ages supernatural comedy comic focused on young women with distinct personalities that features a creative team that is nearly all women, LGBT content that didn’t treat it like an adult issue, and seven amazing character created mix CDs? I’m SHOCKED. (Psst… Not really.) — Picked by Ashley 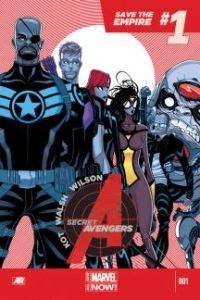 The hardest thing in my life right now is having to rely on Marvel Unlimited for this series. It is amazing. Unlike the other two Secret Avengers series that came before it, this version isn’t nearly as serious. In fact, it’s probably one of the most hilarious books out there right now. Basically, we’ve got Maria Hill pulling together a ragtag group of people including Nick Fury, Jr., his buddy Phil Coulson, Natasha Romanov, Jessica Drew, and Clint Barton. But then there is also MODOK running around helping out SHIELD and a sentient, suicidal bomb named Vladimir… Yeah. It’s nuts. And it’s amazing. Ales Kot is a goddamn genuius. — Picked by Sam 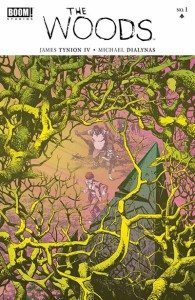 The Woods from BOOM! Studios

This book was my personal surprise blockbuster this year. A private school gets magically transported to some other planet and the kids and faculty have to find a way to survive? It’s not a bad premise but I wasn’t that hopeful. Man, was I ever wrong. The struggle to survive on this planet full of dangerous things hellbent on killing them all isn’t even the most interesting part of the story. That would be the Lord of the Flies-esque politics within the school and the power struggles that develop almost instantly. This is a book that keeps you wanting more and it looks fantastic. — Picked by Sam 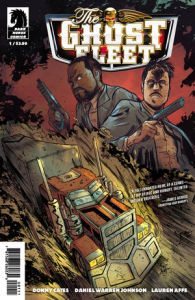 I know, I know. Putting a comic that’s only got two issues out on our list of favorites from 2014? Maybe that’s jumping the gun. But I’m not lying to you here – it’s a great series with a lot of potential. I’d been watching this one from the time it was first announced and the first few issues have not disappointed. The creative teams takes a great concept – the idea of government run ghost fleets transporting undisclosed cargo with unlimited immunity from traffic laws – and mixes it with a strong undertones of conspiracy and revenge. This is definitely one to pick up now and keep watching in the coming year. — Picked by Sam 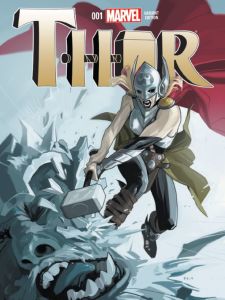 Jason Aaron has been doing insane work on Thor these past couple years. With the God of Thunder series ending the show must go on! The mantle of God(dess) of Thunder has moved on to a new character for all-new adventures with a new female hero hefting the hammer, and taking up the defense of Midgard. Read these stories! Currently on issue #3, so it’s extremely easy to catch up! — Picked by Cody 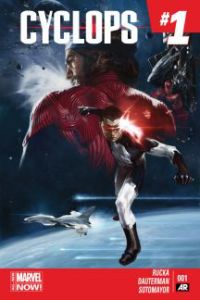 Never before was there a comic that I didn’t know I needed so strongly until it existed as Greg Rucka’s Cyclops. Featuring the teenaged time-displaced Scott Summers from All New X-men, Cyclops sees the kid on space adventures with his recently resurrected (ooo mystery!) space dad Corsair, fighting with space pirates using space swords, and keeping ahead of the bounty hunters hot on their tails. Cyclops has always been a character that I share a deep bond with and getting to see him as a teenager again facing entirely different circumstances has been a delight. — Picked by Cody 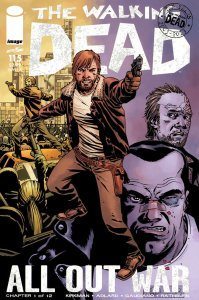 The Walking Dead from Image Comics

I wasn’t sure how The Walking Dead could manage to maintain its bleak nihilism while staying engaging for over 100 issues, but this year it managed to continue its winning streak by abandoning the theme entirely. Through the chaos of the All-Out War arc and the absurd intensity of Negan’s presence as a new villain, Kirkman and Adlard brought the universe of The Walking Dead to the extreme. But even more impressive is the change that took place after it: a sudden shift to a remarkably hopeful outlook. It’s been long enough that the comic could finally pull off the shift, and rather than a story about what we’ve lost, it became one about what we have left and how to make the most of it. Major props to the team for the balls it took to move the story in this way. — Picked by Steve 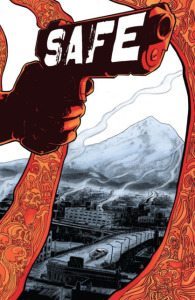 Justin Zimmerman, the writer of this wonderful comic, did a book and brew at a local brewery early this year. From the moment I sat down with him and he spoke three words, I knew he was putting together something special. We talked for the better part of an hour about a number of things, but this comic is what got the conversation started. From idea, to a successfully funded Kickstarter, to its nature-friendly production, SAFE is a solid comic with fantastic writing and stunning art.  It is full of suspense, terror, and at the end will leave you wondering what the hell it was you just read. You’ll want more, but you’ll also get to appreciate the beauty behind why it was left exactly where it ended. It is going to be a favorite of mine and a recommendation for years to come. — Picked by Katie 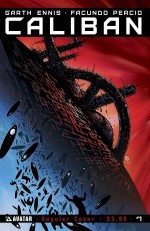 Caliban is high science fiction as its best. Two ships crash together and the result is an action packed scramble to figure out what is happening and how to survive. There’s a lot of death, a lot of violence, but also a lot of interesting character interactions as humans are forced to come to terms with the grisly reality of space. While creatures from an alien vessel take out the human team one by one, the remaining crew members have to figure out how to maintain their humanity while also fighting for their lives. If you like science fiction and don’t mind something a little on the dark side, this is going to be perfect. — Picked by Katie

I came into Seconds, a new graphic novel about a restaurant owner with the power to changer her past, with a whole slew of expectations coming from both O’Malley’s previous series, Scott Pilgrim, and his horribly depressing and self-deprivating Twitter account. Somehow, the end result managed to defy all of them – the story manages to delve into far more mature and complex subject matter while still not taking itself too seriously, continuing to tap into the oddball humor and whimsical art style of Scott Pilgrim. Yet it’s also willing to go to dark, terrifying places, and not scary in a Boogeyman sort of way so much as in an adulthood-is-weird-and-scary-and-no-one-really-prepared-me-for-it way. But at the same time, the characters all have an irresistible charm and compassion to them, even when they act their worst. Yes, Seconds is a juggling act and a contradiction, but that’s the point. — Picked by Steve