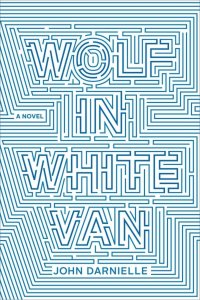 “It was my first idea; they say your first ideas are your best ones,” says Sean Phillips, the protagonist of John Darnielle’s debut novel Wolf in White Van. “I think it’s maybe dangerous to think that way all the time. But when I remember finally building Trace Italian, seeing how it was actually going to come together and really work, then I know what people mean about their first ideas being their best. There is something fierce and starved about first ideas.”

This is only partially true in the case of Darnielle, who has released fourteen albums with his band The Mountain Goats; his first ideas were indeed fierce and starved, but probably not his best. He recorded the first half-dozen releases himself on his Panasonic RX-FT500 boombox, resulting in a sound so stripped-down it felt like sandpaper. His intricate lyrics shone through, and the grainy audio gives these early records a unique aesthetic, but it wasn’t until Darnielle began recording studio-quality music with a full band that the group released their best and most successful work. The same pattern may follow for his fiction career, should he choose to pursue it further – his natural talent in the new medium is undeniable, but this first novel lacks the polish it desperately needs.

Sean Phillips was horribly injured when he was seventeen years old, grossly disfiguring his face and significantly reducing his physical abilities. He’s also committed an atrocity that’s embarrassed his family and complicated his daily life. Darnielle refrains from revealing the details of both events, as well as whether or not they’re connected, in a move that not only adds a layer of mystery and tension to the story, but also reveals the nature of Sean’s way of thinking. Much of the book deals with his struggle to cope with these elements of his past, but by now he has difficulty even thinking about them directly.

Sean occupies his time by managing a variety of role-playing games, particularly the popular adventure tale Trace Italian. Players experience the game by mail, sending their moves in to Sean and receiving back the results of their actions, a style that has remarkably remained popular through the advent of the internet. “The way you play Trace Italian seems almost unbearably quaint from a modern perspective,” explains Sean, “and people don’t usually believe me when I tell them it’s how I supplement my monthly insurance checks, but people underestimate how starved everybody is for some magical pathway back into childhood.”

This escapism, this bizarre blend of detachment and immersion that playing Trace Italian requires, strongly reflects the way Sean views the world in Wolf in White Van. As in his lyrics, Darinelle has a tremendous skill for providing insight and beauty with his writing while remaining unobtrusive. “The worst part of the hearing was I guess the presentation of the various artifacts, the unboxing of the bits and pieces that the prosecution had rounded up preparing for trial,” Sean says of the court proceedings that followed his mysterious actions. “These were blueprints for a case no one would ever end up making, and their imagined barbs would go no further than the fat folders in which they’d been collated; they did find a home in me, though, and lodged there, like particles in a bedridden patient’s lungs.”

But for all the ways it excels in terms of character and prose, Wolf in White Van‘s plot is unfortunately thin. At the point where the book starts, all the story’s action happened years ago, and the plot doesn’t proceed backwards so much as it proceeds however it pleases. Even while Sean retrospectively struggles with the traumatic events of his past, almost nothing happens in the present. In a way, this makes sense on a character level – Sean’s life has reached a point of stagnancy, and likely a permanent one, so the feeling passes on through the narrative structure. But this severely hurts the book’s sense of momentum and engagement, and much of the latter half can feel like it’s dragging, even if the book is only 200 pages.

Still, Darnielle is a strong enough writer that he clearly could (and hopefully will) refine his plotting in future novels. After all, he’s been working in short-form narrative through his songs for decades, so naturally the transition to long-form would require some adjustment and practice. To quote The Mountain Goats’ “Cry for Judas,” “Speed up to the precipice and then slam on the brakes / Some people crash two or three times and then learn from their mistakes.” Wolf in White Van is far from a wreck, but hopefully Darnielle realizes these mistakes and goes back to that precipice again.

Final Thoughts: Wolf in White Van is a promising debut from a veteran writer but new novelist. It often reaches moments of wonderful insight or poignant intensity, even if it fails to maintain this energy throughout.