Oculus Rift Takes You Inside Interstellar 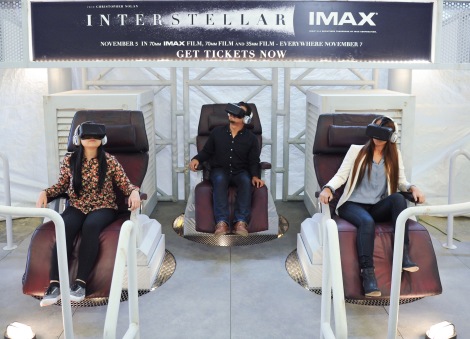 It feels like years ago since breathtaking shots of celestial bodies and a burning Earth in a not-too distant future teased our woefully 2-D screens.

Long waiting fans of Christopher Nolan’s Interstellar can now whet their appetites with a groundbreaking sneak peak — one that pairs the director’s legendary cinematic visions with immersive gaming technology for the first time ever.

A partnership between Paramount Pictures and IMAX® is offering audiences the chance to venture straight into the world of Nolan’s highly anticipated space epic via an Oculus Rift traveling exhibit. Oculus Rift virtual-reality headsets allow people to explore the film’s Endurance spacecraft, while specially engineered chairs simulate participant’s movements in the zero gravity conditions of space.

Christopher Nolan himself said of the experience: “I was impressed with how the experience is able to put you in the cockpit of ‘Interstellar’s’ spaceship, the Endurance.  It was just like being back on set.”

Starring Matthew McConaughey, Anne Hathaway, Jessica Chastain, Bill Irwin, Ellen Burstyn, John Lithgow and Michael Caine, the film follows the story of a group of astronauts from a rupturing Earth who venture into a wormhole in space to discover whether mankind has a future among the stars.

“INTERSTELLAR” opens with advance screenings in IMAX® 70mm film, 70mm film and 35mm film formats on Wednesday, November 5th, two days ahead of its nationwide release. The advance showings will play in select theaters in more than 240 locations across the U.S. and Canada.