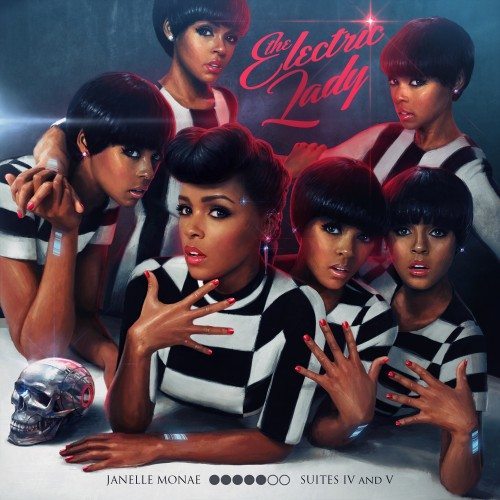 Janelle Monáe is a time lord.

No, I don’t mean that in a joking “she should be the next Doctor” sort of thing. (Though, in my perfect world, she is the Twelfth Doctor, Patrick Stump and Idris Elba are her companions, and Jane Espenson is the head writer.)

No, I mean that I’m fairly certain Janelle Monáe is an honest-to-goodness time lord. Or at least a fairly nimble time traveller who hasn’t been caught yet. Because how else can you explain how she manages to flawlessly combine multiple music genres in a story about oppression, representation, freedom, and love in the 26th century that rings true in our supposedly modern times.

If there’s any truth to the prelude written in the liner notes of The Electric Lady, maybe she is.

For those that don’t know, Janelle Monáe is an Atlanta-based musician signed to Bad Boy Records and associated with the artist collective Wondaland Arts Society. If you don’t know her music, I’m sure you’ve at least seen her face in the makeup aisle of your local big box store since she’s now a spokesmodel for Cover Girl.

But that’s not what makes her the creator of one of the year’s best science fiction releases.

Since 2003, Monáe has been working on the Metropolis concept that was introduced into her music with the songs ‘Metropolis’ and ‘Cindi’ on her self-released EP The Audition. To summarize, Metropolis is the story of Cindi Mayweather, an Alpha Platinum 9000 android who is a famous performer in the futuristic city of Metropolis in the year 2719. She falls in love with a man named Anthony Greendown and has to go on the run because it is against the law for droids to fall in love. Especially with humans.

Metropolis: Suite I (The Chase) released in 2007 and was followed by The ArchAndroid which hosts Suites II and III in 2010. The Electric Lady is Suites IV and V, turning what was originally planned as a four part series into a seven part story with a ton of layers involving love, segregation, time travel, heartbreak, robots, elves, genetic clones, and Cindi being a savior. Not to mention that The Electric Lady is a prequel to The ArchAndroid and gives light to how Cindi is viewed by the droid populous of Metropolis.

I might be getting too much into the backstory now. Let’s talk about the music.

The first thing I really noticed about The Electric Lady is that it felt less experimental in nature than The ArchAndroid. This is not to say that Monáe’s usual brand of retrofuturism isn’t there and that there’s no experimentation at all because it very much is. I just didn’t feel the same sense of genre whiplash I felt listening to The ArchAndroid. Where The ArchAndroid was expansive, The Electric Lady is tight and slick while having the same amount of songs. This is a good thing though, because it works for its place in the Metropolis narrative.

The Electric Lady opens with the Suite IV Electric Overture, which is half-Bond, half-Morricone, and dropping hints of what we’re about to experience like any good overture. It then slams us right into the one-two-three punch of ‘Givin Em What They Love,’ ‘Q.U.E.E.N.’ and ‘Electric Lady.’ Besides Monáe’s sizzling vocals, lyrics, and intense flow, we’re given the amazing guest spots of Prince, Erykah Badu, and Solange Knowles. Yes, His Royal Purpleness is on this album right at the very top to open the record. A man who is notorious for not collaborating with anyone drops probably the second sexiest duet on this record behind Esperanza Spalding on ‘Dorothy Dandridge Eyes’. And ‘Primetime,’ I guess.

Okay, I’m kidding about that. ‘Primetime’ is actually a really cute mix of sexy and sweet and features asking for consent right in the lyrics. Miguel’s voice matches really well with Monáe, leading to one of the greatest slow jams I’ve heard in years.

‘Q.U.E.E.N.’ and ‘Dance Apocalyptic’ are amazing songs that deserve to be a hits more than anything Robin “What a pleasure it is to degrade a woman” Thicke has put out this year, but it’s ear worm status got knocked down a bit after I heard ‘Electric Lady.’ A groovetastic song filled with swagger and confidence, I dare you not to be singing the outro of “Ooo shock it/Break it, baby/Electric lady/Electric lady” for the next week after hearing it.

Besides the seamless feed of ‘Look Into My Eyes’ and ‘Suite V: Electric Overture,’ there’s a clear divide between Suites IV and V. Suite IV is more upbeat, danceable, and sexy, while Suite V turns it down a couple of notches and is more somber. This works in it’s favor, especially as we get to know Cindi. Suite IV is like the public image. Suite V is behind closed doors. It’s filled with songs about heartbreak (‘It’s Code’ and ‘Can’t Live Without Your Love’) and struggle (‘Ghetto Woman’ and ‘Victory’), which makes me wonder if Anthony and Cindi had a falling out and Cindi has to learn to survive and shoulder her newfound leadership responsibilities.

My favorite song on Suite V though is the epic ‘Sally Ride.’ Named after the pioneering astronaut, it focuses on isolation and wanting to runaway from your problems using space travel metaphors. It’s a gorgeous mix of jazz, rock and soul, and hints that there might be something more to the declaration of “ROBOT LOVE IS QUEER” in the ‘Our Favorite Fugitive’ interlude. At least on my listening and the way Mary keeps coming back in this series.

As the album closes with the bittersweet ‘What An Experience,’ it feels like an accurate closer for this part of the story. It reflects on good and bad memories and how music connects us all. Even with the struggles Cindi goes through and how strange it must seem to a casual listener to have a whole musical series about an android who broke the law by falling in love, it really is music that conveys this story the best. It is not a rigid experience. It’s a story of being othered and the story of Cindi goes into our hearts to share her experiences with our own.

And oh, what an experience it is.

Also, check out the Target Deluxe Edition. It features two awesome remixes, an original song called ‘Hell You Talmbout,’ and the world’s cutest, non-pronoun changing cover of ‘I Want You Back’ by the Jackson 5.