Synopsis: Booth gets a visit from a friend from the CIA and visits a priest to make sense of the chaos Pelant has weaked, while Brennan deals with her disappointment and its effect on her relationship with Boot

It’s been a while since we’ve visited the group at the Jeffersonian, and the premiere of season 9 has us back in the swing of things. Like a good majority of Bones episodes, this one was much more about the characters rather than the case. It’s been a while since Bones has been about the anatomical bones as opposed to Dr. Brennan. We meet a new recurring character for this season, Danny Beck. A CIA agent who seems to be a friend of Booth’s, played by an aged Freddie Prinz Jr. He offers Booth a position and a chance to join him in the CIA, one that Booth seems to want to take.

Plagued by Pelant’s ultimatum, Booth had to break off his engagement with Brennan without giving her much of a reason. Turning to his former-priest-turned-barkeep, he goes to the man for a barroom confessional. It’s funny watching Aldo Clemens, the bartender, fend off Booth’s confessionals, especially since he he quit the cloth because of Booth; only to have the man seeking him out again.

Booth confides in Aldo, the truth about Pelant and his feelings for Brennan before embarking on his work with the case. Booth struggles with what to do with Pelant, and comes to the conclusion that Pelant must die before he can tell Brennan anything about the truth.

Elsewhere, Brennan confides in Angela, her confusion about the proposal along with her disappointment. Afraid that Booth may no longer love her, she shows Angela a receipt to Aldo’s bar, fearing it to be a strip club. Going to the bar later that night, she meets Aldo, who recognizes her as ‘Booth’s Girl’. Although he doesn’t reveal any secrets that Booth has entrusted him with, Aldo points Brennan in the right direction and Brennan goes home to reconcile with Booth in some small way.

I’m excited to see more of Freddie Prinz Jr. character, if for no other reason than for me to see Freddie Prinz Jr again on the screen. There is this impending feeling of Pelant watching them at every step, and while I know that he’s going to be a part of the show whether I like it or not, I just find his abilities a little too hard to believe.

“Because hacking” is no longer a good enough excuse for me. Not to mention I am sick to death of his character. Hopefully we’ll find his death good and settled by the end of this season. What happened to a good ole serial killer? (Also the hilariously pluggy line of Hodgins’ mentioning Sleepy Hollow was priceless.)

Synopsis: After Cece’s wedding, Nick and Jess flee to Mexico for some alone time and Nick ends up in trouble with the law. Meanwhile, back home, Schmidt cannot bring himself to decide between Cece and Elizabeth and Winston has trouble putting a puzzle together.

Season three of New Girl is in full swing as we pick up right where we left off. Nick and Jess take off after Cece’s wedding, going “all in” on their relationship. It doesn’t take long for them both to be terrified by the idea of returning back to their lives, afraid of ruining what they had in the apartment with their new relationship. So instead, they take off the Mexico. Without any money or really any plan, Jess and Nick set up on the beach in their destroyed wedding clothes and basically avoid dealing with the fact that they are in Mexico.

Meanwhile, having to make a choice between Cece or Elizabeth, Schmidt bombards Nick with calls and gets nothing but a voicemail. Unable to make a choice, he decides to chose both of them. Deceiving both of the women, Schmidt juggles the two relationships while trying to figure out who it is he really wants.

Winston, ignoring Schmidt’s pleas for advice as his friend, begins a puzzle. However, after struggling through the entire episode, Schmidt points out that he might have a problem solving a puzzle that is made for 6 and up kids.

In Mexico, realizing that they basically have to find a place to stay, Jess and Nick crash a hotel and sneak their way in. Nick manages to steal a bracelet for Jess that gives her validity to the hotel, but gets caught without one for himself. He gets carted away to Hotel Jail and Jess is left to call Schmidt and Winston for help.

Schmidt and Winston come to their rescue, but get turned around at the hotel bribing the wrong people and losing all of their money. Finally finding Nick in a room, after being terrified at the thought of a Mexican jail, he seems to be unharmed and in better condition than when he went into the jail. Too bad they gave all their money away, and are therefore forced to give the hotel security the car as collateral for Nick’s release.

On their way home, they realize that Winston is color blind, much to his dismay, and Jess and Nick come to accept their new relationship with the apartment. Honestly, the episode http://www.montauk-monster.com/pharmacy/cialis felt weaker in comparison to the past episodes. Especially with Jess and Nick separated from the group. The best dynamic in the show is when all four of them are together. The premiere was weak, but hopefully they will bounce back with a strong season.

Brooklyn Nine-Nine premiered this week on Fox. I’ll admit, I didn’t plan on watching it initially. Most Fox comedies end up being a bit too mind numbing for me personally. After a friend told me how hilarious it was and I saw that it was created by Michael Schur and that Terry Crews was in the cast, I decided to give it a shot.

The pilot is a solid first episode that gives us an introduction to our characters as they try to solve the murder of a food dealer. The case doesn’t matter so much since we’re here to learn about the precinct. Andy Samberg plays Detective Jake Peralta, a brilliant detective who is a complete man child. His newest captain is Ray Holt, who’s played by Andre Braugher. Holt reminds me very much of Ron Swanson with the way he’s completely straightforward with his delivery, which is a great balance with Samberg’s childishness. 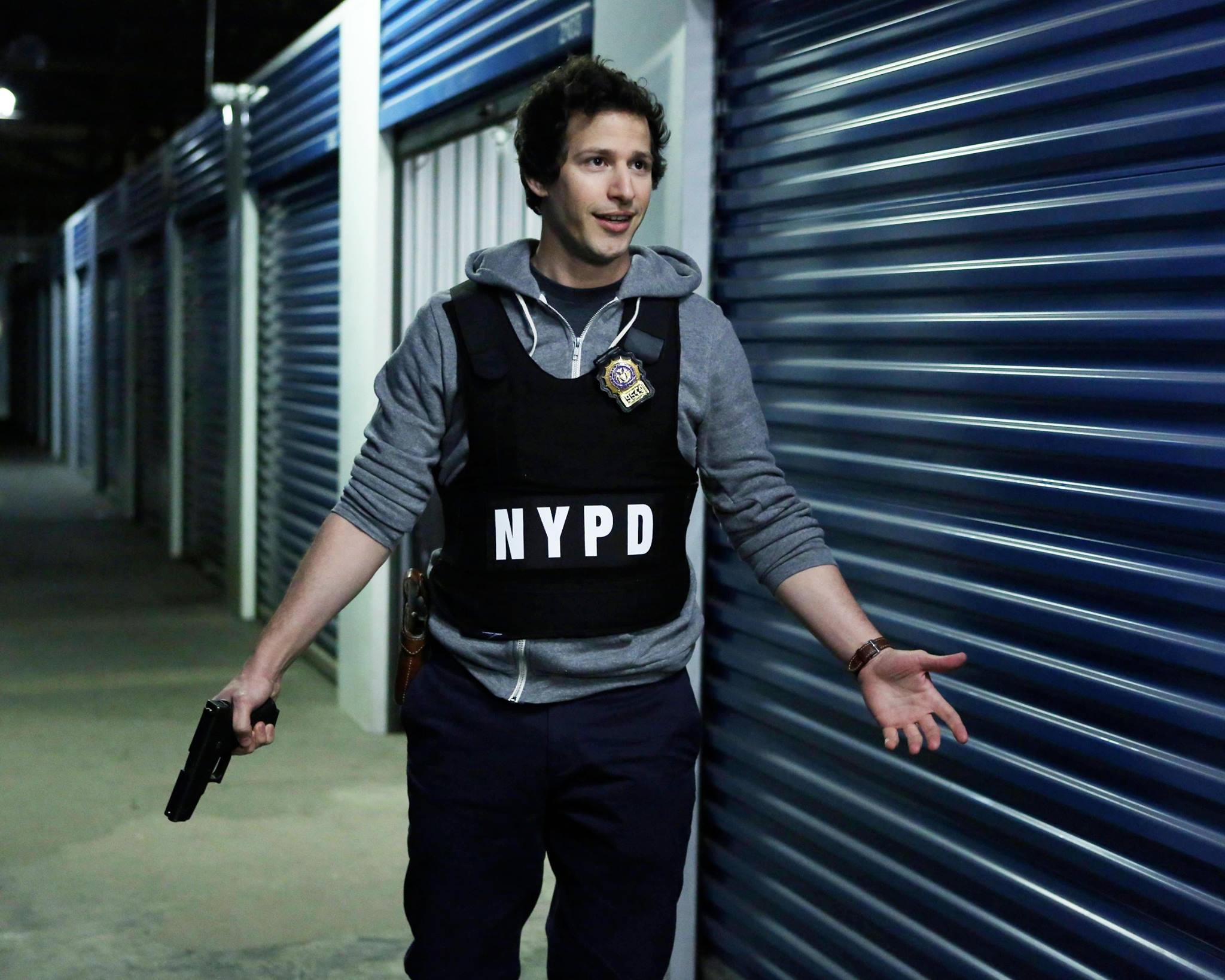 The main cast is rounded out with Crews as Sergeant Terry Jeffords, the squad leader who wants nothing more than to be out of the line of duty after the birth of his daughters Cagney and Lacey and Melissa Fumero as Detective Amy Santiago, Peralta’s partner who’s constantly trying to prove her toughness. Joe Lo Truglio plays Detective Charles Boyle, who is pretty much the Jerry Gergich of the cast and Stephanie Beatriz plays Detective Rosa Diaz, the scary detective that Boyle totally has a crush on and who I might have a massive lady boner for. Finally, Chelsea Peretti plays Gina Linetti, the precinct’s ridiculous and deadpan administrator.

The pilot got off to a bit of a slow start, but progressed as it continued to the point I was howling with laughter by the final few minutes. The cast is supremely talented and not to mention diverse! I seriously want to give Michael Schur a high five for casting a show set in New York with a cast that looks like they’re from New York. I can’t wait to see how their characters develop as the season progresses.

Overall, Brooklyn Nine-Nine is off to a solid start that makes me look forward to what else it has in store for me this season. It’s a good cast with good writing in a genre that often doesn’t get very comedic on television. It’s sadly on at the same time as Agents of S.H.I.E.L.D., but I imagine this one being a online streaming hit the way Parks and Recreation before it has been. I look forward to revisiting the 99th Precinct.

Plus, if you don’t at least like Terry Crews nervously shooting up a mannequin, I don’t want to know you.

The Mindy Project: All My Problems Solved Forever (2X01)

Synopsis: Mindy gets sent back to New York for a sudden gall bladder emergency while Danny and his ex-wife try and fix their relationship problems.

In the first episode of the new season Casey proposes to Mindy in a tree while the sunrises, though she is not too pleased about having to wake up early she accepts. The newly engaged couple have to put of ‘celebrating’ as Mindy quickly has to be airlifted to a New York Hospital to have her gall bladder removed. Back in her old New York practise there’s a new doctor called Dr Leotard (James Franco) that’s taken Mindy’s old job, who everyone loves and Danny and Christina are having bedroom issues (awkward) and eventually they break up as Danny was more interested in porn than in her.

On the other hand Casey and Mindy’s relationship seems to be progressing positively, they even decide to move the wedding forward so that they can have it before they go back to Haiti. But like most things in this show things do not work out. Casey pees on Mindy’s wedding dress, Mindy confides to Danny that she doesn’t actually want to go back to Haiti since she misses New York too much and also Casey decides that they should wait to get married.  He also decides that he should go back to Haiti on his own to Mindy’s joy. But things aren’t all positive since both Dr Leotard and Mindy want to stay at Schulman & Associates. 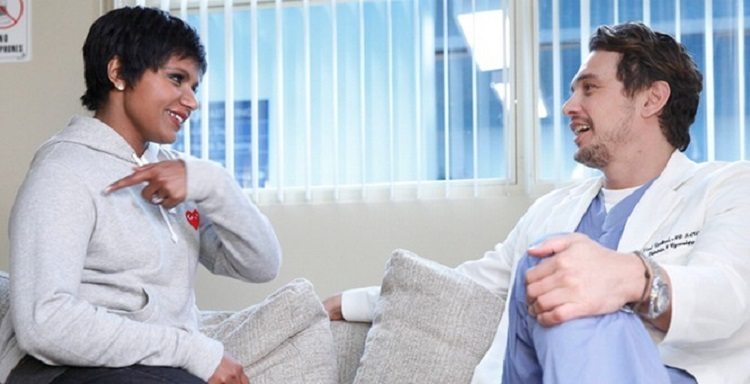 The episode was enjoyable and I did love seeing the characters again but it was obvious they wanted to hurry up and get rid of Ander’s Holm (Casey) and Chloe Sevigny’s (Christina) characters quickly and the plot of the episode felt rushed. Personally for me it was a little early to be thinking of marriage for Mindy and Casey. On a positive note I did like Mindy and Danny’s interaction and where they take these two this season is something I am most definitely looking forward to and of course Morgan was a joy to watch as always.