Vikings: Burial of the Dead Recap

With a title like Burial of the Dead, we kind of know what to expect from this week’s episode. Ragnar and Haraldsen finally show down and the result brings Ragnar closer to his own destiny.

When Ragnar and the earl finally meet in battle it’s no dramatic long-winded fight. It’s both a fight of egos as well as a fight to the death. Given two weapons and two shields, that once broken would not be replaced, so of course the two men start off by casting away their first shield and relying on the second one. The fight is quick but brutal, breaking swords and breaking shields. Without a weapon in either hand they pick up axes and in quick blows, Ragnar is hit in the shoulder while the Earl goes down after being sliced in the back. Accepting his defeat, Ragnar slits his wrists and helps him along to Valhalla. I really enjoyed the respect that both of the men had for each other. I’m going to assume that slitting the wrists is some kind of honor thing, in addition to killing him quickly.

After that everything seems to move smoothly. Haralsen’s lackey is axed down by Rollo. Thyri’s new Swede husband is killed by Siggy. And Siggy announces that Ragnar is now the Earl.

When he first sits on his throne, the men pledge fealty and loyalty to Ragnar, including his already loyal friends and Rollo, but also an older viking named Torstein. Although initially he is rebuffed when he asks to go raiding with Ragnar in the summer, he confesses that he has fought for many years and watched his comrades die in battle and he wishes to end his life honorably so that he can join them in Valhalla. After hearing this Ragnar agrees and so does everyone else.

In the burial of Haraldsen, one of his slaves has agreed to die with him and to follow him into the grave. This is a new process to Athelstan and so he watches in horror as they wine and dine her before letting her meet the “Angel of Death”, a proverbial executioner who kills her and therefore releases her soul into the afterlife. Shocked by this, he runs away, leaving Bjorn and the rest of the crowd cheering.

At the burning of Haraldsen’s pyre Siggy asks Ragnar for the permission to burn his pyre, but is rejected. As the burning ship floats off into the land we learn some good news, Lagertha is pregnant. Ragnar is sure that he is a boy but he also knows his destiny as told to him by the seer, and therefore has taken one step closer to his death.

Seeing Thyri and Siggy packing up their things, Rollo walks into their home and basically proposes to her. He always strives to be equal to Ragnar and now with his place as Earl, Rollo envies the position as well. He is clearly planning to take the Earlship from his brother. Though, when or how, we do not know.

At the Earl’s home, Athelstan repeats a question we heard in last week’s episode. He wishes to learn about Ragnarok. This time, he is not ignored. The seer brings in his herbs, which I’m assuming is some kind of hallucinogenic drug, and burns it in the fire before telling of Ragnarok, the twilight of the gods and the end of the world. It’s interesting to see Athelstan devolve slowly into this world that Ragnar lives in and becomes more and more involved in it.

In the summer, we meet up with three ships now, that sail up to Northumbria and are ready to raid, carrying Ragnar, Rollo, and the whole team. King Aelle prepares himself for battle with the Northmen, and is shown to be a cruel man after he sends one of his soldiers to his death in the snake pit for returning alive.

We’ll see what happens next week when Ragnar faces down with King Aelle of Northumbria. Also below, we have some shots of the Vikings panel at Wondercon to celebrate the fact that the show was renewed on April 5th for Season 2!!! 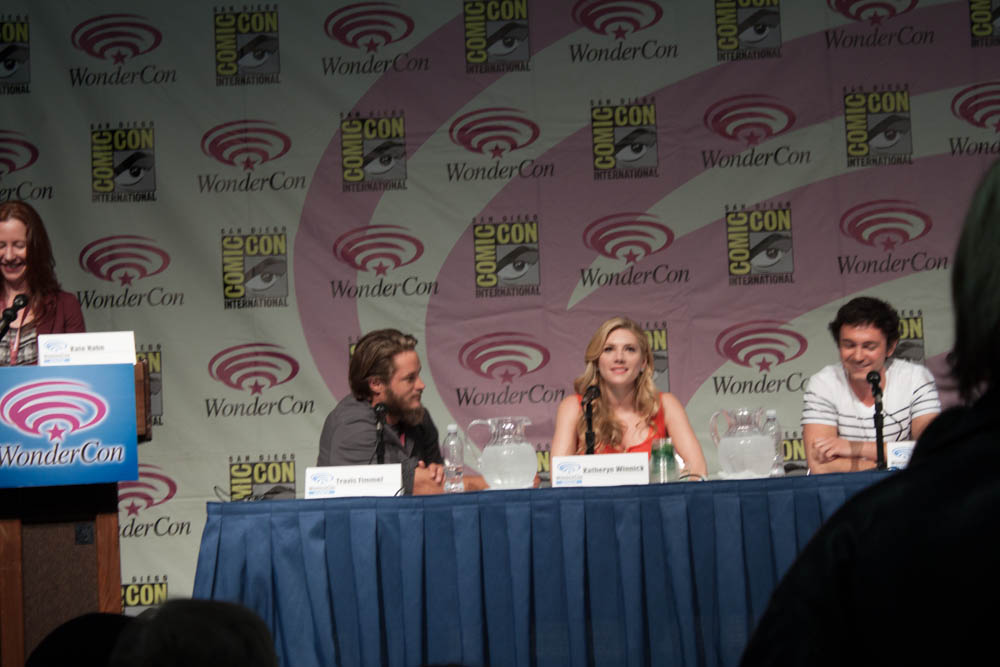 13 thoughts on “Vikings: Burial of the Dead Recap”