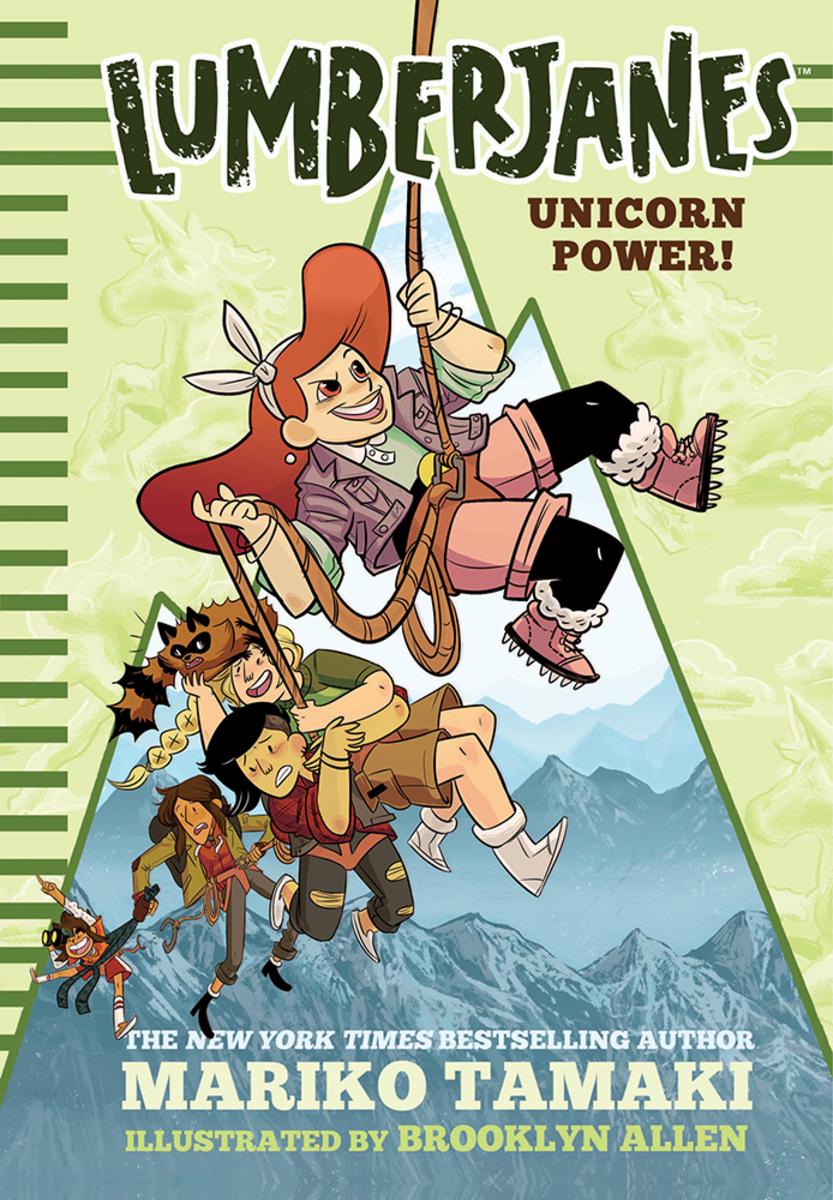 
Rating:
The Lumberjanes are getting the novelization treatment and branching out to a whole new group of young readers in Lumberjanes: Unicorn Power! Renown comics writer Mariko Tamaki and Brooke Allen – the original artist and one of co-creators of the Lumberjanes comics – have come together to create all new adventures for April, Jo, Molly, Mal, and Ripley. Unicorn Power! is the just first in an on-going series for middle grade readers set in the Lumberjanes universe. It’s the perfect way for kids who may not be all that into comics to meet the characters and experience the kind of fun, kooky supernatural adventures the girls find themselves getting wrapped up in regularly.

The book does it’s best to provide just the right amount of background for new readers without being too redundant for long-time Lumberjanes fans. Unicorn Power! takes place sometime after Issue #28 when Barney (formerly of the Scouting Lads) joins the Lumberjanes. Quite a bit of groundwork has already been laid out for the characters, camp, and general strangeness of their world in the comics so the book does need to play a bit of catch up in the early chapters. This can make the start of the book feel a little slow but it doesn’t take long to start connecting with the story and characters.

Lumberjanes: Unicorn Power! doesn’t revolve entirely around unicorns as one might think. Yes, they are important, both in the beginning and in the book’s final chapters, but as is almost always the case in Lumberjanes arcs, it’s the girls themselves who take the forefront. No matter how much weirdness goes on, the books – comics or otherwise – are really about them. And in this case, Unicorn Power! focuses a lot on April and her overzealousness (something the comics have addressed, too). When she gets an idea in her head she’s determined to follow through even if it’s not necessarily what the other girls want to do.

In this book, the girls discover a mysterious mountain after running across a herd of unicorns and April is determined that they will earn all kinds of awards by being the first Lumberjanes to reach the top. But like most Lumberjanes adventures things aren’t what they seem and they find themselves in a pretty serious predicament.

Ultimately, Unicorn Power! tells an entertaining story that has a solid message in the way it addresses April’s pride and ambition. We also see some really great character development in a few of the other girls, too, with Mal especially confronting her fears.

While Lumberjanes: Unicorn Power! is clearly written for a younger audience the story still has some of the same crossover appeal that you’ll find in the comics. As an adult reader I love the Lumberjanes and the comics are always among my favorite releases of the month. And I was still able to enjoy this story, too, once I really got into it.

The book actually takes on an almost comic-like structure by being split into four parts. In a way I think that really helps Lumberjanes switch from it’s usual format to prose. The four parts act as four issues and thus Unicorn Power! feels a lot like a comic arc. The fact that Brooke Allen once again lends her talents to the book helps, too. The whole thing – from the story to the illustrations – feel like they were pulled straight from the comics.

Lumberjanes: Unicorn Power! is a fun, new Lumberjanes adventure that new readers and comic fans alike will love. Those who may not be familiar with the comics will undoubtedly want to rush out and get the first volume after they finish this book. And those who are caught up on the comics will eagerly wait for the second book in this series, Lumberjanes: The Moon is Up!, which comes out next year!