SDCC Sundays: Getting to SDCC the Cheap Way!

If you’re from the Southwest, or from somewhere else in California, the cost of getting to San Diego is a lot more manageable than a flight from across the country or across the world. Having lived in the Southwest for most of my life and traveled to San Diego Comic-Con using all of these methods, here are some of the ways you can get to SDCC without breaking the bank this summer!

The most obvious way to get to SDCC, if you’re in a surrounding state, is by driving, especially if you’re going with a group of people! From Las Vegas, Nevada, the trip is about 333 miles and clocks in at 5 hours if you include time to stop for gas and bathroom breaks!

If you want to take the scenic route, you can detour an hour to drive through the Mohave Desert. Regardless, both routes takes you through the mildly pleasing town of Riverside (Sorry, Riverside, but I’ve been trapped in traffic with you too many times in my life). 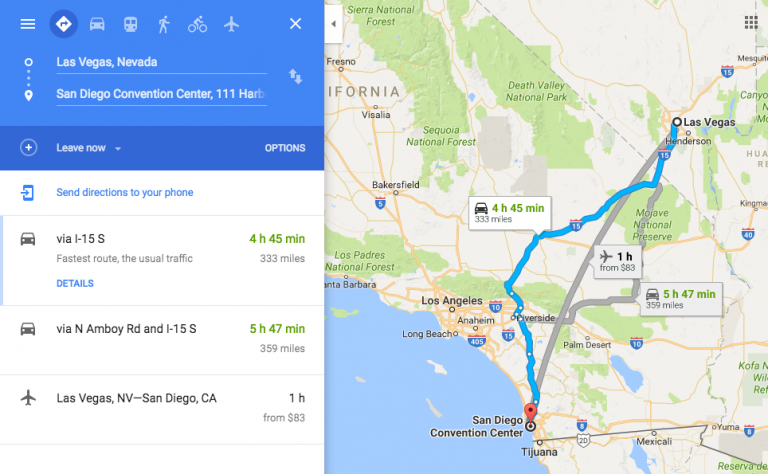 Calculating in an average fill up at Riverside, ≈$3.20 per gallon in a 12 gallon tank, it ends up being about $38.40, if you leave home with a full tank. Not too bad if you’ve got a couple of friends along with you and they’re willing to split the bill!

If you’re coming from Phoenix, Arizona, the trip is a little longer but still just under 6 hours. The 365 mile trip is through some barren terrain so definitely prepare some tunes, podcasts, and 20 questions.

We typically filled up in Yuma, one of the larger towns in Arizona, and one of the last stops before you cross the border into California. It’s a good stop since there is also a Fry’s grocery store nearby where you can pick up snacks, or even just eat in the plaza. 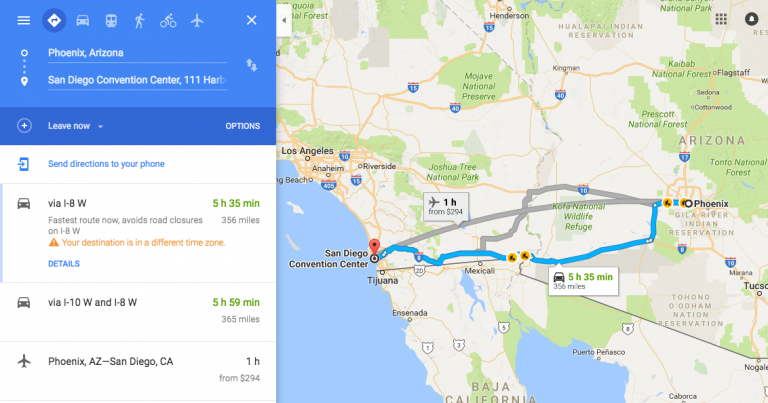 Calculating in an average fill up at Yuma, ≈$2.35 per gallon in a 12 gallon tank, it ends up being about $28.20, if you leave home with a full tank. Again, this is a pretty cheap road trip to go on with friends and one that I’ve taken before with three other friends!

Make sure that you have a parking pass for SDCC, or a parking spot at the hotel, or even just a place to stash your car for the weekend (we’ve done airport long term storage and ubered to our hotel in the past)!

If you can’t manage to wrangle up a good car for the drive, or maybe you’re just coming alone, the classic option of a bus is also there for you. Although Greyhounds have definitely earned themselves a name as a shady establishment, they’ve improved in the last decade or so. If you’re in a true penny pinch, a Greyhound always lands around $40-50 a trip on Wanderu and drops you off about half a mile away from the convention center at the Greyhound station at 1515 National Ave.

If you’re looking for a less conventional brand of bus, I recommend Hoang Transportation! This is a great option for traveling from Northern California destinations: San Francisco, Oakland, Sacramento, and San Jose. The bus also has a trip from Arizona to Orange County, but it’s definitely a more difficult trip since it stops off at Los Angeles and Westminster, but does not go any further south. If you’re considering this path, plan to Uber or take public transportation to the closest Amtrak train station.

A trip from the San Francisco stop at 590 Van Ness Ave, San Francisco, CA 94102 to the Lucky Seafood (9326 Mira Mesa Blvd, San Diego, CA 92126) in San Diego is $65. All tickets include a lunch of a Vietnamese Bahn Mi and allows for one piece of luggage. This puts you at Mira Mesa, which is about a 25-minute drive from the Convention Center, but only 13 minutes to Hotel Circle, so depending on where you are staying, this could be a viable option!

When booking a ticket, make sure to give them a call to confirm the location of the pickup. This is a private bus company so it’s often just a coach bus that makes a stop at a grocery store parking lot. A good sign is if you’re near an Asian part of the community since they often stop near Chinatown or at an Asian supermarket.

One of the most convenient forms of travel in California is probably the train. At least, if you’re pressed for cash and you’ve got a good amount of time on your hands this is a great way to make it down to the convention.

Obviously, the farther you’re coming from, the more expensive the ticket will be. From San Francisco, a one-way trip ends up being $75, from San Luis Obispo/the central coast it’s about $61, from the Los Angeles Union Station it’s around $37. Regardless, they not only drop you off right in the heart of the Gaslamp, but they’ve got flexible times throughout the day.

I’ve taken the Pacific Surfliner route (Central to South) for the last three years from San Luis Obispo and there have been some bumps along the road, but ultimately it was the best bang for my buck. Sometimes it’s a quick trip, other times you can run into traffic or stalling.

There are obviously many benefits to living in the Southwest and on the West coast when it comes to attending conventions. Most of the largest comic conventions are in the area, so why not take advantage of the close proximity to save yourself a little cash? That’s more that can go into collectibles, hotel fees, and food!

So, what did we miss? Are you from the area? Do you have another way of getting to SDCC that we don’t know about? Sound off in the comments below!