Pick Up ‘The Shape of Water,’ out on Blu-Ray Now!

For anyone who unreservedly adored the film, this pick-up is a no-brainer. There are so many small details and thoughtful elements packing into the extras that it can only deepen and expand appreciation for The Shape of Water, Guillermo del Toro’s love letter to monsters (literally). 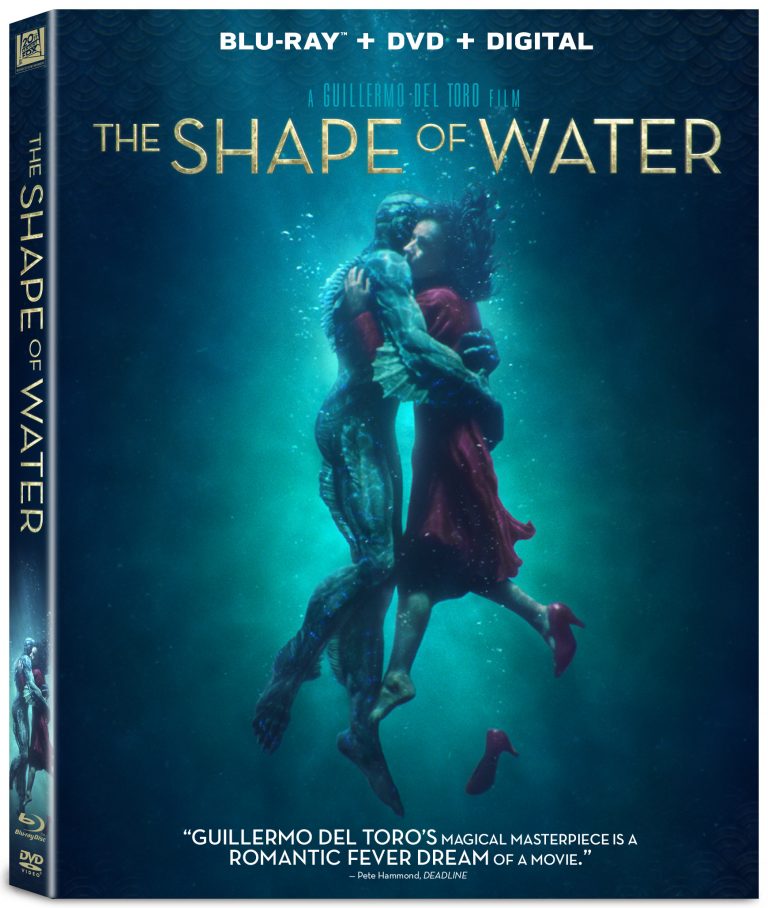 Honestly, I have my issues with The Shape of Water, I’m not going to lie. Fairy tales may not be my genre of choice because I tend to overthink the scenarios and often find them lacking — much like I did with the fast romance of the film (seriously, by del Toro’s own admission, the Amphibian Man only ever learns six words).

However, there’s no denying that the 2017 Academy Award-winning film for Best Picture is gorgeous. Tack on Academy Awards for Best Director, Best Production Design, and Best Original Score and this turns into a film that should be seen and experienced by all who love movies.

In the heart of the Cold War, 1960s experience, a lonely janitor in a secret government facility finds love with the asset that is meant to be experimented on, learned from, and disregarded. Elisa loves life, despite her circumstances, allowing for the rest of the characters to be drawn to her throughout the film.

When reviewer Cody Eastlick saw the film in theatres, he commented, “That is one of my favorite things about this movie. It isn’t about the Power of One. It is about friendship. Romance is second fiddle to the relationships these characters have between their friends and coworkers. Love has many forms.”

With unique characters, an unconventional love story, and the meticulous directing of notoriously attentive Guillermo del Toro, The Shape of Water is something special. You can read our full review right here.

For anyone who loved The Shape of Water, the blu-ray extras are absolutely worth it to learn more about the film from the people who are most passionate about it. There were plenty of reasons to find this film gorgeous, but these segments go in-depth and really highlight the unique and meticulous way Guillermo del Toro envisioned this film. Trust me, as soon as you’re done checking out these extras, you’re going to want to rewatch the movie again with an even more critical eye.

A Fairytale for Troubled Times is actually four smaller segments in and of itself. The first, Love in an Age of War, is exactly what it sounds like. Guillermo del Toro and the actors involved in the film talk about the fairytale love story aspect of Shape of Water and the thought process that went into it, including the period piece elements. What was most interesting to me was the fact that it’s not a monster movie in the traditional sense for numerous reasons, least of all because if it were, we’d all be rooting for Michael Shannon’s brutal Richard Strickland.

Summoning a Water God detailed the process of bringing the creature to life with the advice that they were sculpting a lead character, not a creature. Mike Hill, who is del Toro’s favorite artist, set about creating the original sculpts and talked at length about how the vision evolved and was tweaked to get the finished product. It’s also interesting to hear about the costuming from Doug Jones’ perspective, who claimed it was one of his quickest character transformations — at two and a half hours. He was rightly praised by del Toro for his work and I was amazed to learn that the suit would slowly get waterlogged, which meant Jones was suddenly working with an extra seventy pounds!

For anyone who marveled at the accuracy to the times, the coloring of scenes, the set pieces, or nearly any other breathtaking visuals in the film, Shape: Form and Function really digs into the easter eggs to be found. Discussing how water was brought into the costuming, how color affected scenes and sets, and the sheer attention to detail that del Toro mastered was breathtaking. The tidbit that made me want to watch the film all over again was learning that they’d actually painted and spackled over The Great Wave off Kanagawa in Elisa’s apartment.

The final mini-segment is Aquatic Melodies, which explored creating the soundtrack for the film — including the score, which won an Academy Award for Best Original Score. As someone who doesn’t know anything about music, it’s interesting to see the thought process behind making scores for the characters. The exploration of Elisa’s theme, which is meant to mimic her love of life, includes much more flute than normal and a human whistle as well. This was another segment that made me immediately want to re-watch (and re-listen) to Shape of Water.

There were two specific scene breakdowns on the blu-ray. The first Anatomy of a Scene broke down how the Prologue was shot. If it wasn’t already obvious, the opening scene was meant to be a dream that Elisa was having, with all of the important aspects of the movie floating around her. Amazingly, it was created using a lot of practical effects with the actress and much of the set dressing on wires.

The Dance was an even more fantastical scene in an already fantastical movie, which was del Toro’s aim when it came to filming. This Anatomy of a Scene moment revealed that it took half a day to shoot with a rented orchestra who may or may not have known what they were getting into. The break in tension gave way to a memorable moment and it’s fascinating to learn what went into it.

Have you seen the retro movie poster for Shape of Water, with its beautiful illustrative qualities? James Jean was the artist behind the poster and in Shaping the Waves: A Conversation with James Jean he talks about how important it was for del Toro to connect with the visuals and meaning behind his work. After picking out the interesting visuals he found throughout the film, Jean worked with del Toro’s extremely simplistic yin and yang drawing to get a sketchier poster with charcoal – to tie back into Giles’ charcoal work in the film. It’s always amazing to listen to people talk about their passions and Jean’s conversation is not to be missed.

For those hoping to hear even more from del Toro, Guillermo del Toro’s Master Class is included in the special features. This is an informative sequence where del Toro drops immediately into the technical and heavily creative aspects of Shape of Water because the audience he is addressing is other people in the film industry. He discusses the film from the very beginnings in his sketchbook to the important design aspects of the Amphibian Man and reveals that he repurposed set pieces from his television show, The Strain, to cut costs. It’s a deep dive from the mastermind himself and worth it for all those aspiring for greatness in the film industry.

Finally, for completionists, the Theatrical Trailers are included – including the full one released in theaters as well as two Red Band trailers. They’re quick, beautiful, and it’s interesting to see what scenes and moods made each cut.

Finishing the film, I had a lot of questions — most of which couldn’t be answered when I really started digging into the meat of the story with others — but I can’t deny that the rest of the elements of The Shape of Water were nearly flawless in their execution. This is one of the rare instances where the blu-ray extra features really brought my opinion of the movie up some, as well as immediately making me want to re-watch a so-so story again.

For anyone who unreservedly adored the film, this pick-up is a no-brainer. There are so many small details and thoughtful elements packing into the extras that it can only deepen and expand appreciation for The Shape of Water, Guillermo del Toro’s love letter to monsters (literally).

The Shape of Water is available digitally and in a blu-ray combo pack right now!