A Wrinkle In Time: All You Need Is Love

A Wrinkle In Time is enjoyable, unabashedly earnest and preaching good things, even if it isn’t complicated. It’s a solid kid flick with cool visuals and a heartwarming message. Just don’t expect anything exceptionally deep or game-changing. 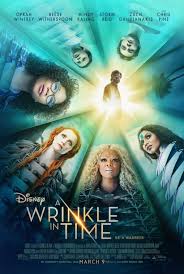 
Rating:
Disney’s latest adaption of A Wrinkle in Time is here, with a big ol’ budget, an Academy Award-winning director, and an all-star cast. So, how’d Disney do their second time around in translating L’Engle’s book from page to silver screen? Mostly good.

A Wrinkle in Time, for those of you who (like me) didn’t grow up on the book, is about a young girl, her ultra-brainy brother, and their quest to find their missing father. With the help of some seriously wild looking women, Mrs. Whatsit, Mrs. Who, and Mrs. Which, the family (and tagalong boy Calvin) embark on a trans-galactic voyage. They visit wild new worlds, see some sights, and eventually meet The It, a dark force spreading and conquering the universe.

So, that’s the set-up. And really, that’s the whole movie. Despite the fact that it’s visually astounding, it isn’t particularly deep. And that’s ok.

For the majority of the movie, while enjoying the visuals and earnest, uplifting messages I waited for the other shoe to drop, for some twist, or big plot beat. But it never really came. And while that seemed disappointing… I just had to remember, this movie is targetted to kids and the plot is going to reflect that.

The movie is about love, belief in oneself, and all sorts of good vibes like that. The It is all negative emotions, self-doubt, jealousy, those sorts of things. And it grows and spreads and represents the ultimate defeat of the galaxy. And stuff. So ya know, just like, believe in yourself!

With the help of these strange Mrs.’ and a Seer in Zach Galifianakis, the kids (well mostly just Meg) stop doubting themselves and are able to do great things, including tessering – this movie’s word for essentially teleporting. With the right belief in a frequency, man can just ‘wrinkle’ space-time and go where they please. That frequency? It’s love.

That’s right, A Wrinkle in Time is basically the kid version of Interstellar.

Anyways, the movie is enjoyable, unabashedly earnest and preaching good things, even if it isn’t complicated. It’s a solid kid flick with cool visuals and a heartwarming message. Just don’t expect anything exceptionally deep or game-changing. This isn’t that. Oh, and a Giant Oprah walks around in this movie, which is just the best.

Disagree? Did I miss something? Want to tell me how superior the book is to the movie? Smash that comment button down below.