Westworld Season 1 – Own it on 4K UltraHD and Blu-ray™ Today! 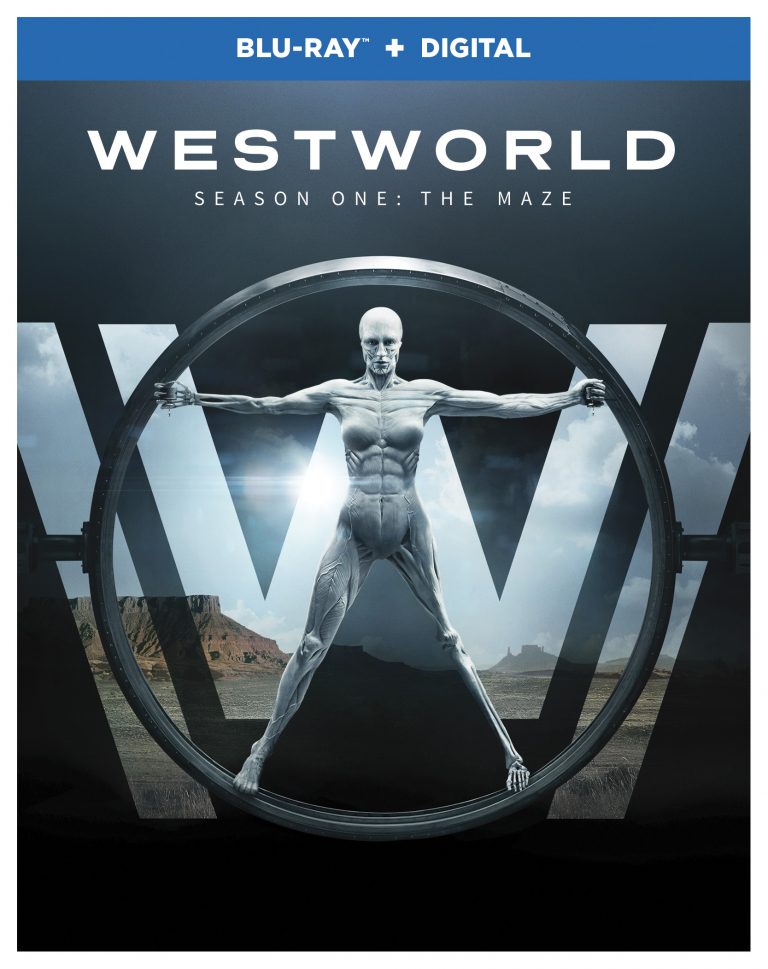 After a long and winding road to HBO and our television screens, Westworld debuted in 2016. Based somewhat on Michael Crichton films from the 1970s, Westworld and the sequel Futureworld, executive producers approached the Wild West-themed amusement park of the future with the point of view of the robot hosts in mind. High-paying guests enter the park and are able to live out their dreams, fantasies, and compulsions as they see fit, without any reprisal from the hosts.

That’s not even talking about their promotion of the show at both San Diego Comic Con and New York Comic Con this year. You can read about our visit to Delos here.

Season one introduces audiences to three main groups: the hosts inside of Westworld, the guests who have paid to be there, and the workers who keep Westworld running smoothly. It is aptly subtitled ‘The Maze,’ and takes audiences on a winding path that explores morality, consciousness, and what it means to be human. With excellent actors in place and a mystery that rivals another J. J. Abrams work, LOST, there is plenty for audiences to unpack as they enter the park and are introduced to the characters.

Westworld is worth a second, third, and even fourth look at the first season to catch all of the hints dropped throughout. It is a television show that unapologetically asks audiences to work for their answers and rewards viewers who paid close attention. Luckily, for the rest of us there are message boards, podcasts (I can’t recommend Decoding Westworld enough), and the DVD and blu-ray release to help us study and re-examine the first season in its entirety.

There is just about an hour and twenty minutes of special features on the Westworld blu-ray. Not all of the features are exclusive to the release, but the ones that were absolutely made it worth owning the home release. And with three blu-ray discs breaking them up, it’s nice to watch a few episodes and then break it up with the special features.

Each disc identifies some of The Big Moments in the corresponding episodes and proceeds to breakdown their importance with the Executive Producers and some of the actors involved. They’re all about two minutes in length, with the exception of ‘Dr. Ford’s New Narrative,’ which caps off the season and is given double to time for exploration. Other important scenes covered include ‘Teddy versus the Man in Black,’ ‘A Host Self-Sabotages,’ ‘Maeve Gets an Answer,’ ‘Bernard Faces an Unlikely Saboteur,’ ‘Dr. Ford’s Blood Sacrifice,’ and ‘The Truth about Bernard.’

Honestly, the first three special features on the first disc all tend to bleed into one another and utilize the same Executive Producers, J. J. Abrams, Jonathan Nolan, and Lisa Joy, and a combination of actors, including Thandie Newton, Evan Rachel Wood, James Marsden, and Jeffrey Wright.

The About The Series feature asks the question ‘What if Westworld really existed?’ It explores the big questions being asked of the series while showcasing some corresponding scenes. An Invitation to the Set, which I’d hoped would be a further exploration of the actual set pieces themselves, was another philosophical discussion of what they wanted Westworld to be perceived as.

By the time viewers get to Welcome to Westworld, it feels a little bit repetitive in nature and explores the same topics of where Westworld came from and their intentions with the series. ‘Welcome to Westworld’ is 8 minutes long, while the other two special features are about two minutes in length. It’s great viewing for anyone who wants to really dig deep into metaphorical thought process behind the show.

Realizing The Dream: First Week on the Set of Westworld was much more of what I wanted to see from the special features. It was Jonathan Nolan and Lisa Joy talking about the shooting location, building the sets, and making character and outfit choices. They also discussed how they wanted practical effects to blur that line between technologies of the future and the present as well as going into a detailed explanation of how they decided to showcase the process of making Westworld robots. That giant vat of white stuff? Elmer’s glue. So much Elmer’s glue.

One of my absolute favorite special features included in the blu-ray release was Imagining The Main Title with 14 minutes of process discussion. EPs Jonathan Nolan and Lisa Joy were back to talk about picking the iconic imagery and the score, but they were also joined by Elastic, the company that created the Westworld credits (and the Game of Thrones credits too!), and Ramin Djawadi, who wrote the theme music.

Audiences get to see what went into crafting the credits, from practically made prop pieces (the eyeball!) to storyboarding out scenes and how they picked out the images shown. They tackled the difficult question of bringing together the iconography of the Old West and a technological future and how Djawadi complimented all of the imagery. It’s 14 fascinating minutes that I could watch more than once.

Disc two of the blu-ray release had the EPs and actors discussing the Reality of A.I.: Westworld. This special feature explores the existential threat of artificial intelligence and reminds audiences that you connect with the robots in the show, even knowing their robots. To the hosts, the guests are the real threat. Even so, an interesting concept was brought up that, “You don’t think twice about turning off your XBox.”

The Gag Reel was something of a disappointing because it was less than two minutes in length and it relied heavily on funny narration over serious scenes that audiences saw in the actual show. Most of the cast made funny faces and I did laugh a few times, but there definitely could have been more – we all saw the social media posts that were just as funny from this friendly cast.

Another incredibly fascinating special feature came from disc three, The Key to the Chords. It was eight minutes of Ramin Djawadi talking about adapting modern songs for the Westworld player piano. He showcased some of his process and also gave an explanation of how the player piano for the set works. Absolutely worth your time and something that I hadn’t considered beforehand.

The final special feature included on disc three was Crafting the Narrative, where Jonathan Nolan and Lisa Joy actually watched the final episode of the season and gave their commentary throughout. Unlike voiceover commentary, audiences didn’t watch the episode along with them, but had scenes interspersed through their discussion. In the half an hour, they talked about the timelines, the shooting of specific scenes and the thought process behind them, as well as easter eggs like Evan Rachel Wood and James Marsden’s heads on the wall behind Anthony Hopkins in his office.

Finally, there was also a booklet insert in the blu-ray copy that was a Corporate Guidebook that served as a Handbook for New Employees at Delos. With pictures from the show, it is an actual explanation of the Westworld hub and goes into astonishing detail. Seriously, if you had questions about ‘livestock management,’ the narrative, and more, this booklet gives insight into all of it. Gorgeously designed with plenty of diagrams as well, it is worth a flip through before or after viewing the series.

While not all of the special features are exclusive, the ones that are more than make up for owning Westworld for yourself. ‘Imagining the Main Title’ and ‘The Key to the Chords’ both shine a light on lesser-appreciated aspects of a television show and were really the most captivating parts of the special features. If you don’t watch anything else, make sure to find the time to explore those two segments. Trust me, you won’t be disappointed.

The first season of Westworld benefitted from a long production time, outstanding acting from a cast with undeniable chemistry, and an intriguing story that explores artificial intelligence in a way that is just believable enough to be our future. The marketing, as with the show, often blurred the lines of reality and fiction and provides audiences with a unique, lasting experience. Pick up the blu-ray today and become immersed in Westworld before season two premieres in 2018!