All the Reasons Why #Girlboss is Unwatchable 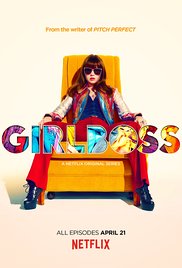 
Rating:
It seemed like Netflix can do no wrong: the company has revolutionized the way tv series are produced and released with its own original content for years. But even as Netflix churned out one hit original series after the next, it was inevitable the company would eventually produce a flop or two. For every Stranger Things, there is a #Girlboss. It’s practically Newton’s third law.

The 13 episode series follows a twenty-something Sophia Amoruso (played by the fabulous Britt Robertson) through the creation of the (now bankrupt) startup fashion site, Nasty Gal.

One of the biggest things wrong with the series is that it is an amalgamation of so many concepts that were better executed than it. It tries so hard to be The Social Network with its unlikable, misanthropic heroine with a brilliant, game changing look at the fashion world, but it just isn’t.

It also tries to be the first season of Girls with its ‘fresh take’ on millennial self-centeredness and off-brand ‘girl power’ substitute for feminism. Sophia makes Lena Dunham’s character on Girls look compassionate and Jessie Eisenberg’s Zuckerberg look downright cuddly.

1. If I needed more negative portrayals of white, privileged millennials, I’d skim through one of the 1.2 million hot-takes on why the generation is lazy/selfish/immature and not buying houses/cars/teacup pigs, etc.

2. If I needed more stories about ‘disruptive’ entrepreneurship in the hands of arrogant megalomaniacs, I’d follow what’s been happening at Uber.

Subpoint b: I’d also watch Wolf of Wall Street, Breaking Bad or The Social Network, or a half-dozen other forms of media that know how to work with an anti-hero.

As for the plot itself, it’s pretty thin (at least for the two episodes I could stomach) – it follows Sophia through the highs and lows of her quarter-life crisis, which just happens to be a poorly-executed, get-rich-quick scheme chock full of petty theft.

The series can’t quite figure out if it wants you to root for Sophia or against her. It tries hard to impress you with the character’s independence and fierceness which instead (unintentionally?) comes across as jerky arrogance. The whole thing gives me a headache and makes my soul feel dirty.

The pure garbageness of her humanity makes Sophia’s character unsympathetic and unfunny. Even the triumphant moments feel hollow because of the character’s disregard for anyone but herself. Her goals are not admirable.

And yet, the whole series glorifies her lifestyle of stealing rugs and conning others because she’s rewarded for being smarter and more successful than everyone else. But hey, it’s what she founded her company on, and it’s why she has a book deal and a Netflix original series, so I guess we are the suckers.

I honestly don’t know why anyone green-lit this series for production. The real puzzle though is why they’re marketing it as a comedy. Sure, the trailer was buzzy and lured me in with the shiny promise of an offbeat protagonist’s struggle to start a business with nothing but #feminism and #goals under RuPaul’s watchful gaze, but in the end, #Girlboss is just a pandering, candy-coated distraction from its own lack of depth and creativity.

A more accurate title would be #epicfail.