‘Rogue One: A Star Wars Story’ Takes the Fight to the Empire — and It’s Out Now!

A REVIEW COPY OF ROGUE ONE ON BLU-RAY COMBO PACK WAS PROVIDED BY DISNEY AND FINGERPAINT MARKETING IN EXCHANGE FOR A FAIR AND HONEST REVIEW. NERDOPHILES WAS NOT COMPENSATED FOR THIS REVIEW. OUR OPINIONS ARE OURS AND OURS ALONE. 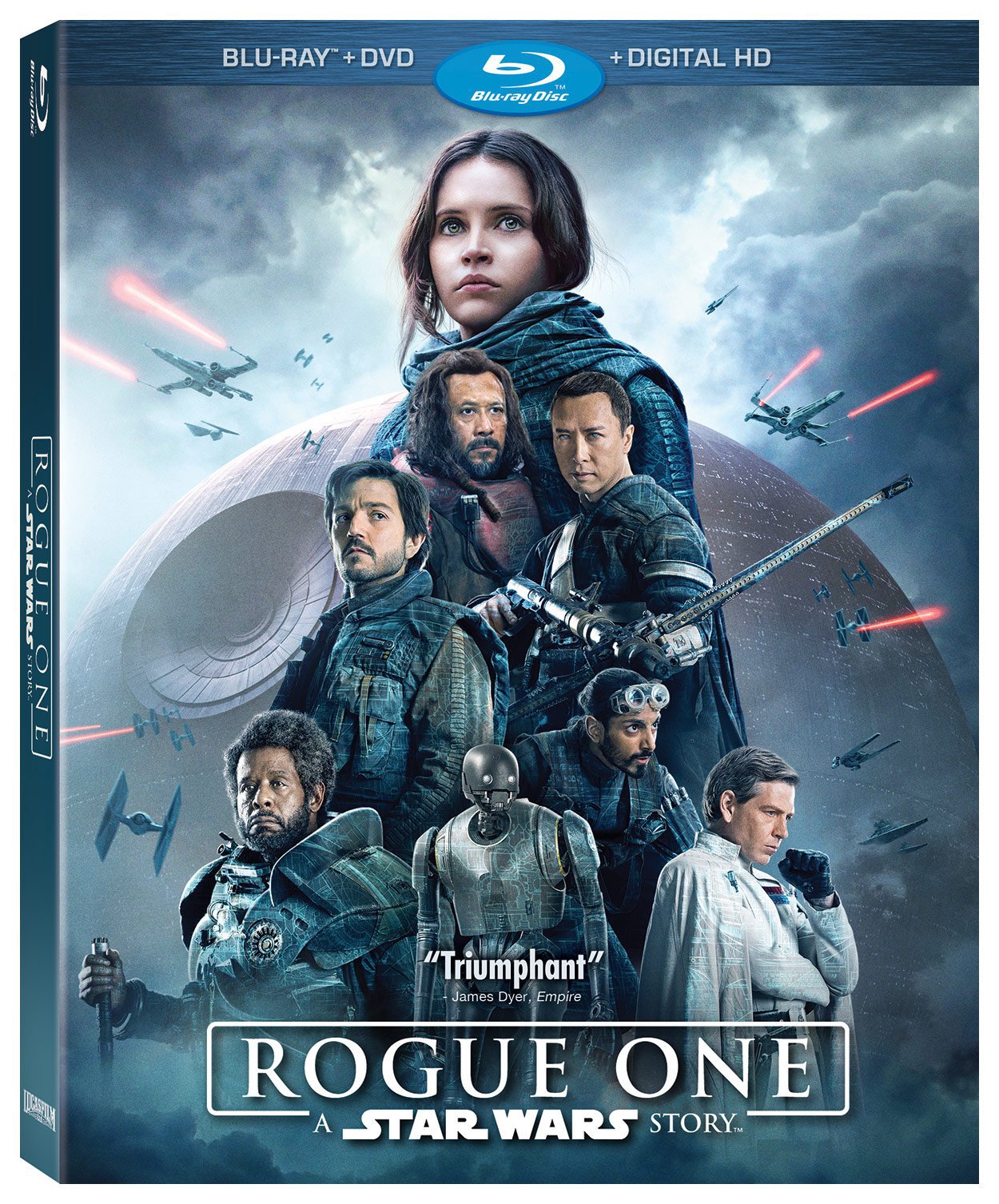 When Disney first bought up Lucasfilms and took over the reins of the Star Wars franchise I was hopefully optimistic. And when they announced that we would not only be getting a brand-new trilogy but also a series of standalone films I was excited. Still, even when you have a lot of hope that something will work out you’ve also got to be realistic.

Rogue One sounded amazing from the very beginning. It was effectively an old school war film with a plucky band of misfits steal from the enemy to save the day. How could it get any better? But then the rumors that a young Han Solo film would follow started to circulate and were eventually confirmed. Even I found myself asking if we really needed these standalone films. Did we really need to fill in every little gap in the Star Wars canon?

After seeing Rogue One, though, I have nothing but confidence in the folks making these standalone Star Wars films. This is the movie that convinced me to place blind faith in them and their ability to create new stories. I can’t believe I ever questioned whether or not we needed this movie in the slightest.

Because the answer is, yes, we did.

Rogue One recaptures everything that made the original trilogy great without rehashing things like The Force Awakens ultimately did. It’s a film that stands on it’s own entirely while also making itself a cornerstone in the Star Wars story. Before Luke Skywalker ever learns about the Force and takes on the Death Star you have the heroes of Rogue One saving the day and setting things up for him.

I don’t want to gush too much about the film. Cody did a pretty great job of that in his spoiler-free review back when the film was first released in December. I do want to say, though, that this is an amazing movie. Every Star Wars fan should see it as soon as possible. And, personally, every time I sit down to marathon the original trilogy (which happens quite often) I’ll be starting with this movie first from now on.

But let’s talk about the blu-ray release.

So, let’s take a look at what the Rogue One special features have to offer. (Be warned: we’re going to talk about spoilers to some degree from here on out – noting too major though!)

When you boot up the special features disc you have two options: “The Stories” or “Rogue Connections.” The first option leads you to over an hour of behind-the-scenes footage that you can either watch in one go or individually in shorter sections. The second is a short featurette similar to others that you’ll find on Disney releases pointing out various Easter eggs throughout the film.

Rogue Connections is fairly short but totally worth watching. It points out various connections to the rest of the Star Wars canon that some viewers may have missed as well as some cool behind-the-scenes info. Some of the fun things they point out are cameos by Rian Johnson, Ram Bergman, and Gareth Edwards. They also point out the Hera Syndulla reference though for some weird reason not the Chopper appearance. They also leave out Saw Guerra’s origins in The Clone Wars animated series but they do point out the importance of Red Five’s death in the the battle above Scarif. It’s a cool featurette despite the fact that some of the more obscure references that we probably needed to have pointed out weren’t included.

I recommend watching all of the “The Stories” as that’s where where the real bulk of the special features can be found. If you have the time to watch all of them in one sitting you should. They’re all connected and there’s a beginning and an ending that tie together. Watched together, it’s basically an hour long pseudo-documentary.

A Rogue Idea, The Empire, and Visions of Hope: The Look of Rogue One focus more broadly on the development of the film. They discuss the genesis of the Rogue One concept as well as the story’s ultimate development. A lot of emphasis was placed on the look and feel of the film. It was intended to draw from the original trilogy and tie into it naturally which is very obvious when you watch the film – but even more so when you see the folks behind the film explaining their design choices to you. It’s wonderful to see how excited everyone was to take Rogue One from it’s initial pitch and make it into the awesome film it is today.

The other ‘stories’ focus more specifically on characters. They include Jyn: The Rebel, Cassian: The Spy, K-2SO: The Droid, Baze & Chirrut: Guardsians fo the Whills, Bodhi & Saw: The Pilot and the Revolutionary, and The Princess & The Governor. The latter is more technically focused than the rest. It focuses on the motion capture process that went into bringing Princess Leia and Governor Tarkin into the film and the challenges the actors faced in bringing those roles to life. The others focus on their titular characters. The Empire also features some insight into Krennic’s character which is nice because I’d hate for him to be left out (since he’s kinda my favorite character in this movie).

The character shorts are really cool to watch because, again, everyone is so excited to be a part of this film. The actors talk about what it was like to take on their respective roles. You hear from Alan Tudyk how exciting it was to bring humor to the Star Wars universe and you get to see how he brought K-2SO to life (spoiler: it involved stilts and a ridiculous backpack sometimes). Donnie Yen and Wen Jiang talk about how excited their kids were for them to be involved in the film. And while the Rogue Connections featurette ignores Saw Guerra’s origins, they talk about his appearance in The Clone Wars and how he came to be a part of Rogue One.

There’s a lot of insight that you’ll get about the filmmaking process, the character development, and more. But there’s a lot that’s not included.

We know now that Rogue One had a very different ending originally. And we also know just from the original trailers that a lot of scenes were cut from the final film. None of that footage is included on the blu-ray release. It’s not even really discussed in the special features either. I can understand that to a degree. Disney and Lucasfilms don’t want to confuse people on the canon or get them thinking too much about what could have been. The problem is that we already know all that at least some things were filmed before being cut at the last minute and we want to see it. At the very least we want to know more about the decisions that went into making those changes.

Now, granted, despite my disappointment in the lack of deleted scenes on this blu-ray release everyone’s going to buy this film now that it’s out just because it’s Star Wars. I watched the full movie two times just while writing this review. It’s amazing. I can’t get over how much I enjoy this film. It’s fun but it’s also dark at times. It’s the original trilogy through and through and yet it’s something else entirely. Rogue One blew me away when I saw it in theaters and still makes me cry at the end every time I see it.

So, I recommend you get it. Whether or not you’ve seen it before, you need to bring Rogue One home so that you can add it into your Star Wars marathons. But if you’re like me and enjoy special features (and especially deleted scenes) lower your expectations in that regard accordingly. Otherwise… it’s Star Wars. How could you pass this one up?

Rogue One: A Star Wars Story was released on blu-ray combo pack and DVD on April 4, 2017.