I’ve been an avid fan of Zombies, Run! (produced by Six to Start) since nearly its inception. I started “playing” when only one season existed and they hadn’t yet done a Virtual Race.

Now, five years later, they haven’t stopped producing some of the most intriguing and rewarding storylines available in any medium. In so many ways, this series feels like living through a radio drama or podcast, but with the addition of actively participating in the storylines through your runs. And as a collective, the worldwide Runner 5s have run 29 million kilometers (that’s about 18 million miles!). And they don’t seem to be stopping anytime soon.

The basic premise is that you, Runner 5, go out on various missions for your homestead, Abel Township. These missions vary from fetching specific supplies, gathering intel about villainous scientists, or saving fellow survivors of the apocalypse.

It’s an immersive experience that also includes township building (with the supplies you collect, you can build a virtual Sims style town), zombie chases (these can be switched off, however, which I’ve done, because, yikes!), and a virtual community through the ZombiesLink site.

Between the audio clips, the app incorporates music from your own library to keep you motivated and moving and each run is somewhat customizable in that you can have it play more or less music between each clip. For me, I created a specific “running” playlist of scores from some of my favorite, intense films. I want to feel the apocalypse when I run.

I know… running. Personally, I’ve been a runner for more of my life than not, but even in that, it can take some serious motivation to get me moving. And that’s just what Zombies, Run provides. I’ll be honest and say that I have by no means made it all the way to season 5. I don’t run nearly enough.

But at half-way through season 3 and with having participated in all of the virtual races, I have to say, these stories keep me coming back. To me, they’ve become almost real. Sam? If you can’t tell from our site here, he would totally fit right in with all of us. Nerd. Gamer. Tech wiz. Voice of reason. We all could use a Sam in our lives. Nadine? That woman is a force to be reckoned with. And with each story, you feel more connected to the world and the characters. (the Spring Virtual Race, for instance, had me completely messed up with it’s storyline.)

Beyond the running app, Six to Start has created a board game version, which they also produced through Kickstarter and which can be pre-ordered now, and a comic, which is often one of the items that can be purchased during virtual race registration.

Honestly, I can’t recommend this app enough. If you are a runner, but want the experience to be a little more fun, or if you aren’t a runner but would like some motivation, give this a try. You won’t regret it. (ok, you might regret the running a little bit, but the stories with be worth it. Promise!) Here’s to many more miles run, friends made, tears shed, and zombies destroyed. 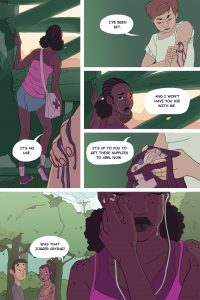