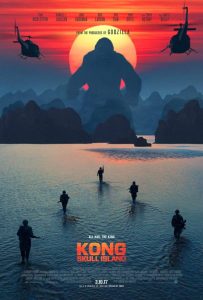 It’s 1973. With the recent advances in satellite technology, an undiscovered island has been located in the South Pacific. While undiscovered, the island is not unheard of. Passed through myth and rumor the tales of this fabled island have found their way to the ears of Monarch agent Bill Randa (John Goodman). He assembles a crew of scientists, army personnel, a mercenary tracker (Tom Hiddleston), and war photographer (Brie Larson) to get to the island before the damn Russkies do and see what’s there. But he knows more than he lets on.

Kong: Skull Island is the next film put together to build the Legendary Pictures Monster Cinematic Universe, previously built by Godzilla (2014). It sees the return of the Monarch organization investigating the tales of larger than life creatures, this time on Skull Island.

Once the crew get there, they are immediately greeted by a gargantuan sized ape creature who doesn’t take kindly to their presence. What follows is a traditional, stranded on a hostile island plot absolutely jam packed with classic pulp novel tropes like a hollow earth and lost civilizations, all of which is guided by one rule: The Rule of Cool. If something cool can happen it will happen. The movie is littered with giant monsters, familiar and new, soldiers, lost tribes, samurai swords, napalm, dinosaurs… the list goes on. And that makes this flick the most fun to sit and watch.

It looks fantastic, the setting is gorgeous and every frame is a painting. It’s surprising that this is the case for a flick about a giant ape but hey, we’re in strange times. The music, which sticks to what would normally be frowned upon as trite Vietnam era music (and it is!), finds away to be used that makes it clear to the audience that everyone is in on that joke.

It’s a big (King Kong sized) dumb, fun movie. It has moments where it clear the flick has moral messages, but it allows them to be addressed and moved on from or just presented in a well-balanced approach. Never mind the fact that it is absolutely layered with Heart of Darkness and Apocalypse Now references. And this surprise at the movie’s capabilities shouldn’t be so surprising to me. Just look at the pedigree of the folks making it!

The director, Vogt-Roberts previously has directed only two films, The Kings of Summer and American Ham, the Nick Offerman stand up special. The movie is written by three fellows: Dan Gilroy of Nightcrawler fame, as well as Max Borenstein, the writer of Godzilla (2014), and – and – Derek Connolly, the writer on Safety Not Guaranteed, Jurassic World and its yet untitled sequel,  AND Star Wars Episode IX. This movie is put together by a bunch of up and coming stars, nerds through and through, with the guidance of old hand Dan Gilroy. Why then are we so surprised it’s so much fun?

To further that point, throughout the movie, Kong’s fiercest foes are the ‘skull-crawlers’ (so dubbed by John C. Reilly’s character). The director had this to say about them, “That creature, beyond being a reference to a creature from the 1933 film, is also this crazy fusion of all of the influences throughout my life – like the first angel from Evangelion, and No-Face from Spirited Away, and Cubone from Pokémon.” With that kind of inspiration behind it, what can we possibly be worried about?