A REVIEW COPY OF THE TIME MUSEUM WAS PROVIDED BY THE PUBLISHER VIA NETGALLEY IN EXCHANGE FOR A FAIR AND HONEST REVIEW. NERDOPHILES WAS NOT COMPENSATED FOR THIS REVIEW. OUR OPINIONS ARE OURS AND OURS ALONE. 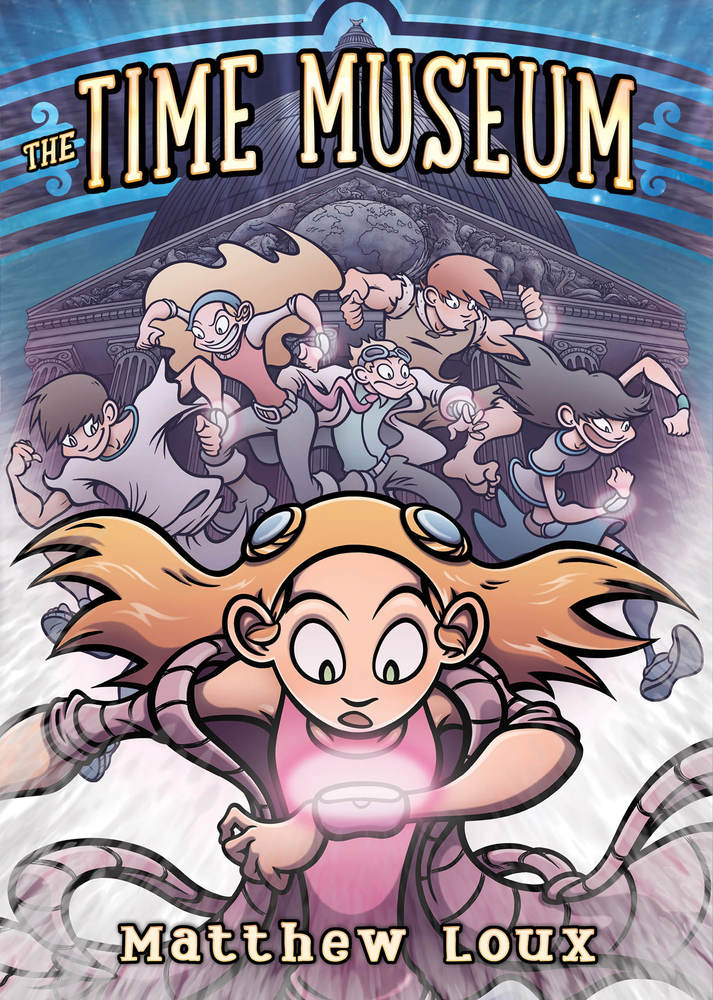 
Rating:
Time travel seems to be the latest storytelling fad if the number of television series revolving around the theme these days is anything to go by. And thanks to Matthew Loux and First Second Books the middle grade readers among us aren’t going to be left behind. The first in a new graphic novel series, The Time Museum proves to be a fun and engaging start to the story of Delia Bean and her fellow interns at the titular Time Museum.

Our heroine, Delia Bean, is a girl with ambitions. A brilliant over-achiever, she loves basically anything science related and dreams of being a scientist like her Uncle Lyndon. Unbeknownst to her, there’s more to her uncle than meets the eye. He is, in fact, the founder of the world (and time) renown Time Museum as she comes to learn one summer.

Delia is invited to compete for a coveted internship with the Time Museum along with a handful of other children from across history. Age and time period of origin are no barrier, however, they are all told (or at least placed under the assumption) that there can only be one intern at the end of everything. They are run through a series of tests across time, locked in competition for that singular internship position.

Friendships are formed and tested, broken and rebuilt as the kids grow and learn – and come to realize that sometimes cooperating to achieve something is more important that proving one’s own, individual skills. Especially when it ultimately falls on them to save the world and basically time itself.

The Time Museum does a really great job of keeping you interested in the story and moving it along at a decent pace. A good portion of the book revolves around the trials Delia and the others are being put through, but while all that is happening larger events are being put into motion in the background. A few run ins with the enigmatic Grey Earl set the stage for a climax with much larger consequences than simply which one of the kids is going to end up getting the internship.

The cast of characters is comprised of a great mix of personalities and archetypes. I really liked that the kids included a pre-historical boy and a boy from Ancient Rome – as well as kids from the modern era and even our future. They all had their own particular skills that complimented each other throughout each test and dire circumstance they founds themselves in.

The Time Museum is a very lighthearted book in most respects. The kids genuinely enjoy what they are doing as do the many adult characters. Sure, there are some pretty high stakes involved in the story, especially towards the end. But the dialogue and the adventure are all just generally meant to be fun and engaging. There are some pretty quirky adult characters like Uncle Lyndon and Sir Walter – a very spirited, armor suited instructor. And the dialogue between characters is often full of good-natured joking around and teasing.

At the end of the day, that sense of humor is The Time Museum‘s greatest strength.

Some stories can take themselves a little too seriously and these days even middle grade books can delve too far into the ‘gritty’ trend that seems to be overtaking entertainment. But even in the more serious moments, The Time Museum retains that sense of fun throughout. Coupled with relatable characters, unique character designs and illustrations, quirky environments, and an engaging story, The Time Museum a decent read.

The Time Museum is a smart book that manages to be both funny and engaging and I definitely think it’s great for kids – especially those who love time travel books. It also gets obvious props from me for having a female main character who doesn’t just love learning but who aspires to be a scientist. And while it is largely a self contained story it leaves itself open for the second installment which should keep readers excited to see what comes next.