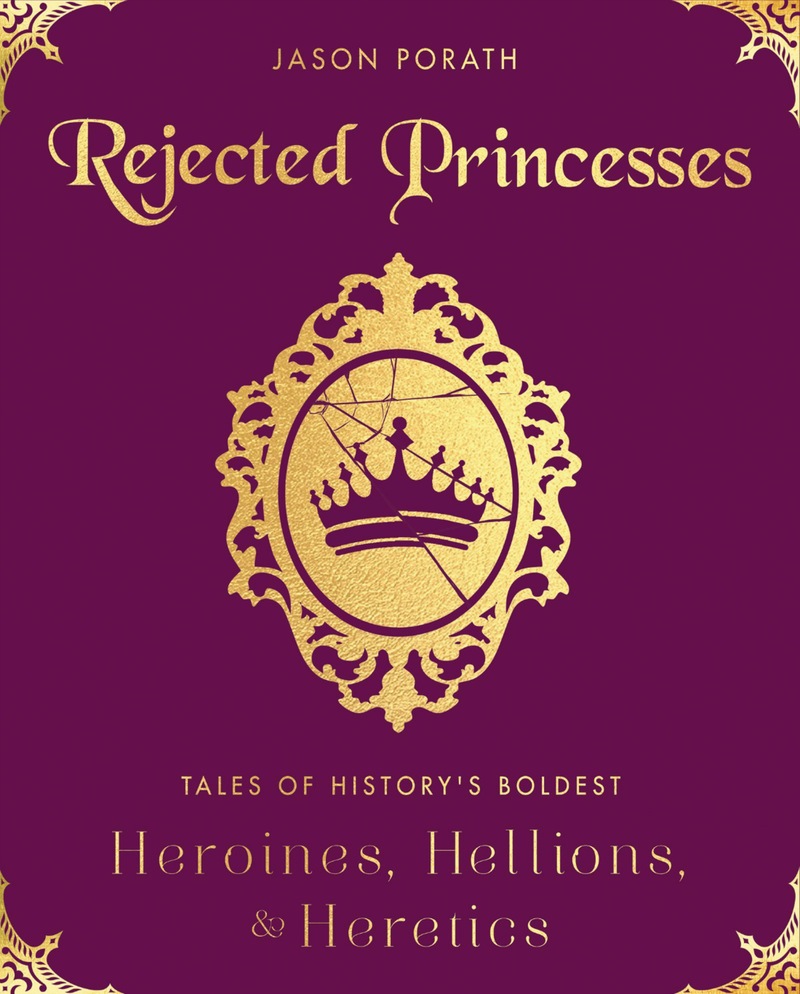 
Rating:
Everyone has heard of Snow White and Sleeping Beauty – but have you ever heard of Nzinga Mbande from Angola? How about the sisters Trung Trac and Trung Nhi? Or Boudica? Now, before anyone gets upset and rushes to our comments section to say ‘Of course, I have! They are some bad ass women!’ let me say that I’m sure some of you have. But the vast majority of people have not. When people think of memorable women they either look to Disney-fied princess and fairy tales or, often, the women whose achievements and advancements have been considered proper and appropriate for history to retell.

Jason Porath came to that conclusion, at least, while he was working for Dreamworks. He and his colleagues started trying to come up with badass ladies from history who would never get the princess treatment. That eventually grew into the Rejected Princesses website – and then this full-fledged book that we’re reviewing today.

The website is really cool and it’s full of stories of girls and women throughout the ages doing amazing things. Porath was an animator at Dreamworks so his entries on the website (and now in the book) are accompanied by pretty awesome, cartoon-ish illustrations of each of the ‘rejected princesses’ he features as well as comics of their full stories in some cases. At the top of each entry there are also designations with movie-style ratings for the content and more.

The book takes that formatting and expands upon it. Each woman’s story is accompanied by just one large, detailed illustration that sometimes comes with commentary at the end of the story explaining why the author decided to depict her that way. There’s also a more streamlined rating system. The stories are all rated for maturity and are accompanied by warnings at the very beginning explaining what sort of content might be included (i.e. violence, rape, abuse, sex, and self-harm).

If you haven’t checked out the website before that might surprise you. But the whole point of Rejected Princesses has been to put the spotlight on dangerous, deviant, and determined women whose stories aren’t necessarily as heroic or simple as many of the stories you may have heard about “admirable” women before. So the stories are full of dark content at times because that’s the truth. Or, at least, it’s the truth of their stories (the author admits that some of the stories may be embellished or some facts may be incorrect).

Don’t worry that you might read something you’re not prepared for, either. The stories are organized in a way that it starts out with some pretty tame stories at the lower maturity levels and starts building up to the harder stuff. Caterina Sforza’s story towards the end of the book is rated 5 for maturity and includes mentions of violence, rape, and abuse – but Andamana’s story which begins on page 25 is rated only 1 for maturity with no other triggers. The book lets you ease into things if you need to.

Some of the women included in the book are, in fact, princesses or queens but others are athletes, scientists, pirates, and more. Some of the women in the book aren’t necessarily even real – they are female figures from mythology or folk lore. But all of them have pretty bad ass stories. These women come from all over the world. You’ll find stories set in Africa, Asian, and Central and South America and learn about women that most Western readers won’t even have heard of in passing.

It’s a very fun book to read and, while it’s presented a little bit as a kid’s book, the content is, at times, very much adult. I love that about it, too. It gives a sort of whimsical feel to things while never once losing sight of the fact that we’re hear to learn about some pretty kick-ass people. It helps you really embrace the theme of the ‘rejected princesses.’ His illustrations could just as easily be concept images for animated feature films on the lives and histories of any one of these women.

But, of course, they never will be.

Rejected Princesses is an amazing book and I highly recommend it to anyone who loves a good read about some kick-ass ladies. I’ve been reading a story or two before bed each night and it’s a really great way to unwind at the end of the day. It’s also a little inspiring. These women – whether or not they’re real, the stories are perhaps a little less than truthful, or they are someone you know a bit about from Wikipedia surfing – do some really incredible things. And as a woman you’ve got to imagine sometimes just how awesome it’d be to make that kind of a mark on the world and history.

A REVIEW COPY OF REJECTED PRINCESSES WAS PROVIDED BY THE PUBLISHER IN EXCHANGE FOR A FAIR AND HONEST REVIEW. NERDOPHILES WAS IN NO WAY COMPENSATED FOR THIS REVIEW. OUR OPINIONS ARE OURS AND OURS ALONE.