When Comic Con International announced that they were mailing out badges in non-descript envelopes, I wasn’t all that worried. They told us specifically to look out for a letter from “EL.” We were sent emails confirming that our badges were in the mail and on the way to us. How hard would it be to miss comic con badges?

Spoiler: I almost threw my badge away. No, I almost ripped the entire envelope in half and then threw it away. 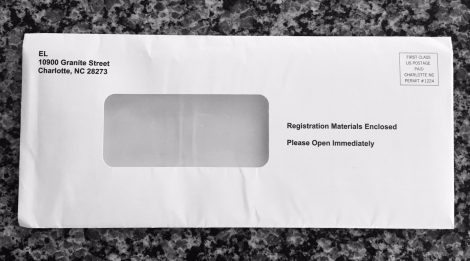 It very much looks like a credit card off or other spammy mail that urges “Please Open Immediately” and it didn’t come from an address in California – something that may have tipped me off sooner to the contents of the envelope.

The good news? It has a little bit of heft to it, so even when I assumed that it had one of those mock credit card offers inside, I still opened it up to see what was so heavy.

Maybe those with more than one badge being sent their way will have more obvious packaging, but this is a reminder to be diligent about the mail until you have that badge in hand!

We’re in business! Got my #SDCC press badge! pic.twitter.com/KedLuEw0MD

So far, it sounds like this is the one hiccup to the process – though we haven’t seen what attendee badges look like mailed out yet. While I understand CCI’s interest in keeping confidentiality, I wouldn’t be opposed to a symbol or design or envelope next year that triggers a knowledge of what’s inside (the eye, a toucan, something).

Have you gotten  your badge yet? What trigger would automatically make you assume the mail came from CCI? Hopefully, you’re not here to tell us you might have tossed your badge in the spam pile. Let us know in the comments!