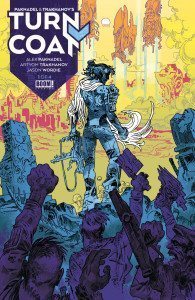 I am an unabashed fan of Alex Paknadel’s writing. His ability to take common genre tropes and expectations and turn them inside out makes him one of my favorite comics’ writers producing work right now. Like Arcadia before it, Paknadel & Trakhanov’s Turncoat is a smart, challenging read that lays the groundwork for readers to come to their own conclusions through subtle hints in dialogue and intricate artwork.

An alien race simply known as Management set up shop on Earth three hundred years ago, but thanks to Management cop and turncoat, Marta Gonzalez, they are finally leaving. Marta’s intel allowed human resistance to take out a supply ship and Management prince, ultimately freeing Earth – while leaving behind a questionable future and a shaky place in society for the potential savior(?) of the human race.

From there, the issue jumps forward in time another five years to find that Marta has been denounced by previous Management supporters and detractors alike. However, she’s carved out a niche for herself as a no-nonsense private investigator that still draws on her old contacts. The story really kicks off when she’s approached by an elderly woman looking for her son.

Three hundred years is a long time for an alien occupation to really ingratiate itself into the culture, economy, and environment on Earth and Trakhanov’s artwork speaks to that. Panel after panel is filled in with an organic fungus that fills in the cracks of society. It’s a constant reminder that the Earth from before will never return and not one of the character’s comment on its prevalence, leading readers to accept this as the new norm.

Trakhanov also does an amazing job with the line work and facial expressions. Marta is especially believable because of how well Trakhanov can convey her displeasure and her silhouette leaves no question as to whether or not she can take care of herself in this world. Beyond that, the background touches with an alien language still prevalent, the depiction of alien technology still in use, and the tattered reminders of what Earth was, Trakhanov really compliments the fantastical world-building that Paknadel excels at.

Colorist Jason Wordie compliments both Trakhanov and Paknadel by pulling the world back from the brink of being gritty, dark, clichéd noir. The sickening green fungus is unobtrusive enough to remind readers of the alien that casts a shadow over the world and the other pops of color throughout the issue feel like a glimmer of humanity keeping hope alive in a tumultuous time.

As a four issue miniseries, I predict that there won’t be a lot of time to delve into what life was like under Management’s reign, but man am I curious – the Chitinous Sister of the Order of Saint Carapace was a schoolteacher? That exoskeleton nightmare wouldn’t be able to teach me anything.

BOOM! Studios promises this series will be “an exploration of power vacuums and the legacy of oppression,” and looking at the previous works of this creative team, as well as the strong foundation set in the first issue, I have no doubt that readers are in for a compelling tale brought forth by strong writing, evocative visuals, and bold color choices.

Paknadel & Trakhanov’s Turncoat is a welcome genre-bending entry into dark sci-fi and hardboiled detective noir that readers should pick up at their local comics shops as soon as possible!

A REVIEW COPY OF  PAKNADEL & TRAKHANOV’S TURNCOAT WAS PROVIDED BY THE PUBLISHER IN EXCHANGE FOR A FAIR AND HONEST REVIEW. NERDOPHILES WAS IN NO WAY COMPENSATED FOR THIS REVIEW. OUR OPINIONS ARE OURS AND OURS ALONE.