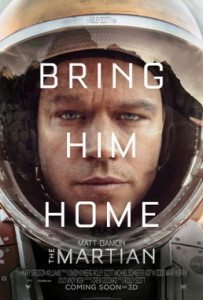 I finished The Martian by Andy Weir in a day because it was that good of a read. It made my engineer brain all giddy because there was science/tinkering/math/all around awesome mixed into a survival story. Seriously, if you haven’t read the book, go read it now. It might not be for everyone because the book goes into great detail of all the math equations and shows how Watney works through problems.

If you love math and science, it’ll be fantastic. The film gives just a glimpse into the book’s intricacies in NASA science technology. Here’s a really cool read about Nine Actual NASA Technologies in ‘The Martian.’  The best part of the book though is not the math/science but the humor. It’s a damn funny book and Watney’s humor is on-point with that of “nerds/geeks.” Too long have movies portrayed nerds/geeks as pocket protector wearing, awkward people. This is doing it right in that we’re not scared to blow ourselves up in the pursuit of finding new things.

Mark Watney (Matt Damon) and crew are on Mars (Ares III mission) to gather samples and assess the area. The mission has to be aborted when a freak dust storm hits. While the crew are headed back to the MAV (Mars Ascent Vehicle) Watney gets impaled by a broken antenna and is lost in the storm. Melissa Lewis (Jessica Chastain), the commander of the mission, tries to go back and find Watney but his vitals are reporting back negative, and the winds are getting so high they can tip the MAV. She makes the decision for the safety of the crew and leaves Mars without finding Watney.

Hope is a powerful emotion and when the world is all tuned in to try and save one man 33.9 million miles away, there are no boundaries. You have the world’s best minds working on scenarios to bringing him back. The Martian is about survival, trusting your knowledge and past experience to get you through the toughest challenges. Every obstacle Watney faced he was logical and worked his way through it, all while keeping a sense of humor. You would think he’d go insane living by himself…as the only man on the planet, but he kept his morale up.

The movie was true to the book, of course there were some major changes with the ending scenes, but I can see why they did it. All I can say *minor spoiler* is that Watney faced more…difficult challenges in the book, and you were really on the edge of whether or not he’ll make it. There were more curveballs in the book, that’s it. Other than that, there were some cut scenes, so all in all a great adaptation to movie form.

The acting was great, everyone fell into their characters perfectly. I couldn’t have pictured a better Mark Watney (Matt Damon really nailed it, he has that everyman look to him but is still a genius and a MacGyvering badass). It was really cool seeing Jeff Daniels play the Director of NASA, Teddy Sanders. I haven’t seen him in a lot of movies lately, and he was good for this role. There are so many characters in this movie but only one really disappointed me and that was Alex Vogel (played by Aksel Hennie), in the book Vogel is German with a thick German accent…there was no German accent in this movie at all. It was sad and probably my only quip with an otherwise fantastic piece.

I was also thrilled when I found out that Ridley Scott would be directing because he is the perfect director for this type of movie. Just look at his resume: Alien, Blade Runner, Gladiator, Black Hawk Down, Prometheus…impressive. I have enjoyed every one of his movies (with exception to Exodus: Gods and Kings, that was the story though). The Martian was visually pleasing, melding the stark dusty landscape of Mars to futuristic space base. I really liked that he mixed in the overlays of the Watney video logs with the vitals, and oxygen, and all the stats of the base. Ridley Scott is an A+ director and this is just another notch on the brilliant totem pole for him.

The soundtrack was obviously going to have lots of disco (if you’ve read the book) and it felt a little similar to Guardians of the Galaxy but it found its own rhythm. You dance and groove along with Watney as he listens to disco or watches Happy Days. It’s brings the right kind of quirky to Watney’s sense of humor.

Final Thoughts: I don’t know why you’re reading this review, go watch The Martian! The story flowed great, the acting was fantastic, the shots were beautiful, action was just enough to have that ‘he’s in danger’ feeling, and the humor carried the movie great. This is easily one of my favorite movies this year.