“Paper Towns” is a Summer Indie Film That Delivers 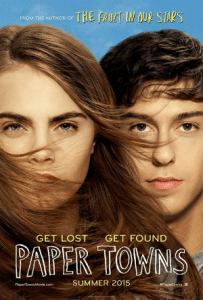 What I like about Paper Towns is that audiences know exactly what they’ve signed up for when they come into the theater, and this movie delivers exactly that.

Paper Towns has all the trappings of an indie movie–from the mysterious, manic pixie female lead to the affable-yet-awkward hero, both of whom are on journeys of self discovery at the end of their high school year.

Also, if you’ve read the book, then you’ve already seen exactly what happens in the movie. Which isn’t to say that you shouldn’t see this film–on the contrary, I think Paper Towns was more faithful, funnier, and better-executed than The Fault in Our Stars, and I enjoyed it about five times more. For a book which spends most of its plot in Quentin’s head and searching for the female lead, the film version was surprisingly well-paced and interesting. In short, it translated extremely well.

If you haven’t read the book, here’s a quick synopsis:

Quentin is in his senior year of high school. He’s pretty much got his life all planned out from college and medical school to kids and his white picket fence. Everything is going according to plan.

Margo, played by the incomparable supermodel-turned-actress Cara Delevingne, is anything but safe. From her midnight adventures to her routine disappearances for weeks on end, Margo likes to live her life unconventionally.

One night when Margo creeps into Quentin’s window, Quentin becomes Margo’s partner-in-crime. The two drive through the city, putting Margo’s revenge scheme into motion. The night culminates in a sweet moment at the top of the SunTrust Tower before the two part ways.

The next week, Margo isn’t at school. Quentin starts finding clues Margo left to lead him to where she’s hiding and recruits his friends to look for Spiegelman with him.

The supporting cast of Quentin’s friends were fabulous; the cast had chemistry, the movie had plenty of laugh-out-loud moments, as well as sweet, poignant moments where the friendship between the characters carried any lulls in the plot. Overall, all the individual parts of this movie all came together to deliver a gem of a summer indie film.

Don’t expect it to be mind-blowingly original, but if you’re looking for a solid indie film, or if you’re a fan of the book or John Green’s other work, check out Paper Towns.

Final Thoughts: If you’ve read the book, you know exactly what to expect in the movie–and if you like John Green’s novels, I highly recommend seeing this film. If you haven’t read the book, then Paper Towns delivers all the good qualities of a good indie flick- with superb actors and writing, the movie is equal parts humorous and poignant.