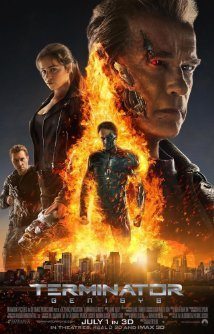 As a fan of the Terminator movies, the next installment to the franchise, Terminator Genisys, was exactly what I was hoping for. The film did an excellent job of tracking causality and did so in a way that both acknowledged the past while rebooting the timeline for future movies. Keeping true to the on-going theme that “Judgement Day” can never really be avoided, only postponed, despite the characters’ convictions that “this time they can succeed.”

There is no denying that this film was a reboot (altering characters and events) but it was very tastefully done, providing the viewer with a cause-and-effect for nearly every difference. Sarah Connor (Amelia Clarke) is no longer found by Kyle Reese (Jai Courtney) as a defenseless waitress as in the first film. Sarah is now an amped up version of herself from the second, explained by the fact that the tactical time travel device has been used more than anyone was actually aware. In my opinion, the only performance that could have been improved was that of Kyle Reese, I didn’t see him as the same (or even a different version of) the character in the first film. Arnold Schwarzenegger’s performance and many of the subtle (and not-so-subtle) nods to the previous timelines will likely be a favorite part of the film for many fans like myself. I was pleased to see that they tastefully overlapped the events from previous films using a combination of remastered footage from the original Terminator and CGI. There was a hint that the writers may be trying to develop some motivation for the previously faceless Skynet, now played by Matt Smith. The battle to prevent Skynet/Genesis from coming online and the technology contained in the facility hinted to me that the next film (if made) will bring all of the waves of timelines to a head; a sort of forcing function created by pushing further and further in time to what seems to be the inevitable birth, and death, of Skynet. Stay for the coda.

Final Thoughts: While this movie may not be very memorable, I believe it was well done overall; my only real complaints being the acting for Kyle Reese’s character, the tacky explanation using nanobots (rather than just saying it is a machine composed of nano bots), and some may disagree but, the Terminators upgrade not reversing his aging exterior.