Monsters and Adventure Abound in “Darkmouth: The Legends Begin” 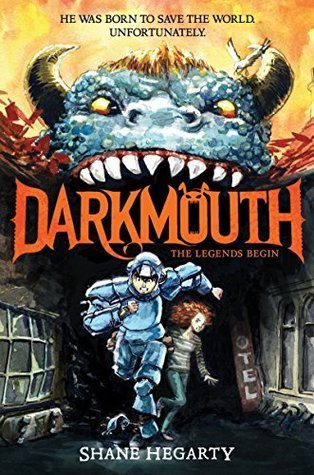 Monsters are awesome. Far more awesome and diverse than something simple like zombies or vampires. In the world that Finn lives in, hunting monsters is just sort of the norm for some people. There are whole families dedicated to protecting towns frequently riddled with monster attacks.

Or rather… there were.

Darkmouth is the only town in the world that still sees monsters (known as Legends) come through to our world regularly. His father is a great Legend Hunter who has kept the town safe for years. Finn? Not so much.

It’s very likely that his father might just be the last of the Legend Hunters because twelve year old Finn is pretty terrible at the whole thing. Everyone knows it’s his destiny to someday take over for his father but, honestly, he’d rather be something like a veterinarian someday maybe. But Finn finds that even he can rise to the challenge when people depend on him.

Darkmouth: The Legends Begin is one of those real gems that keeps you reading through from start to finish. It’s action packed at times but at the same time spends a good amount of time developing Finn as a character as well as the world in which he lives. I love when books – especially middle grade books – are able to strike such a great balance between those things. The fabulous illustrations and occasional snippets throughout the book add a bit of flare and I could see that helping to draw in some of the Diary of a Wimpy Kid crowd.

My favorite part of the book, though, really was Finn. He’s such a cool character. He’s a twelve year old raised to fight monsters who DOESN’T WANT TO FIGHT MONSTERS. Kids in these sorts of books always seem to have the coolest lives. I mean, who doesn’t want to be Harry Potter, right? Finn kind of gives a sort of realistic spin on things and makes you realize just how kids with pre-determined destinies might really feel about having no real choice about what they do with their lives.

If you’re looking for an epic summer read, Darkmouth: The Legends Begin is a great choice!