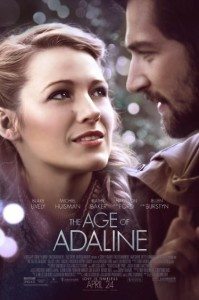 Age of Adaline tells the story of Adaline (Blake Lively), who lived a relatively normal life in the early 20th century before she swerved off the road and got struck by lightning. After her accident, Adaline finds that she can no longer age – she’s stuck at a perpetual 29 for the better half of a century.

Adaline’s spent the majority of her time fleeing from federal authorities who would rather see her locked up and studied than what she’s currently doing: eking out her years in the library and switching locations every few years.

The movie follows Adaline and her internal conflict with settling down and living a life when she is immortal and everything/everyone she grows attached to will inevitably leave her unless she leaves them first. This moral conflict drives Adaline to live a relatively solitary life, until a persistent donor from the library (Michiel Huisman) tries to woo her and she slowly gives in. Later, she finds that he is the son of another man she used to date (played by Harrison Ford), which further complicates her situation.

The movie was thoroughly average, if not light on romance for being marketed so heavily as an epic romance.

The highlight of the movie was Blake Lively’s performance as Adaline. The character was written to be very wooden at first – she’s disconnected from the world around her because she’s nearly a century old living in a young body – but her character becomes more human throughout the movie as she connects to other characters.

One of the issues with having such a wise character is that her decisions are usually beyond reproach. We always get the feeling that the hyper-intelligent, Braille-enthusiast, polyglot Adaline has all the cards while the other characters are struggling to find where she hid the deck. It elevates Adaline to a plane where she’s unrelatable, even if she’s not unlikeable. Which is a problem when your protagonist’s story is the sole focus, and she feels too calculated to elicit an emotional reaction.

Furthermore, the romance between the two leads doesn’t get a lot of screentime. It doesn’t feel epic because we get maybe two minutes of screentime from the pair for every three scenes of exposition into Adaline’s past. This is a shame because Huisman’s character was extremely witty and likeable and he and Lively had phenomenal chemistry.

Finally, the narration throughout the movie was obtrusive. The film suffers  from ridiculousness with pseudoscience as to why Adaline doesn’t age. Which, honestly – the audience didn’t need an explanation – I wasn’t sitting in the theater dying to know what was happening with Adaline’s ‘elastic telomeres’ (which, not a thing, FYI, for those at home who are wondering) on the cellular level to suspend my disbelief. I don’t need a fake biology lesson to justify your plot premise.

She doesn’t age. We get it.

Final Thoughts: Adaline is enjoyable enough – it’s a little long and there isn’t enough plot or romance to justify the runtime. It is a good date movie, but expect more historical drama and marveling at how flawless Blake Lively’s skin, hair, and wardrobe are than actual story.