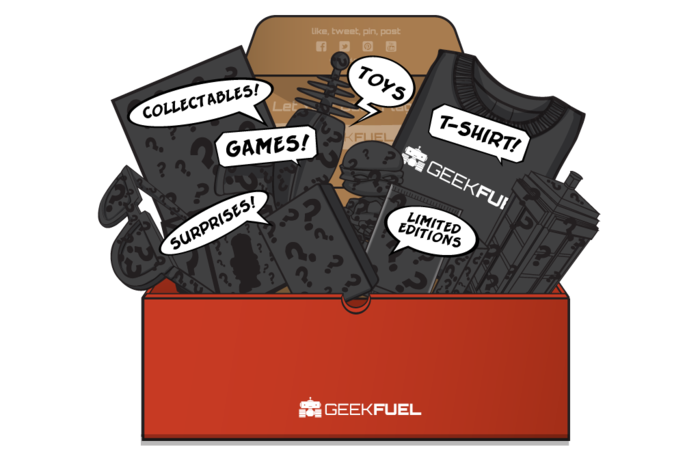 Subscription boxes are one of our favorite ways to treat ourselves over here at Nerdophiles. A lot of our staff members subscribe to one box or another. Loot Crate and Nerd Block – or is many variants – are obvious favorites and Jane does excellent monthly unboxings for each of them. But many of our staffers subscribe to other boxes like Bark Box, Birchbox, and any number of snack boxes, too, because c’mon. We can be nerds 24/7 – we have other interests!

Subscription boxes are fun and usually a pretty good bang for your buck so we’re always keeping our eyes out for others that we’d enjoy.

When the folks at Geek Fuel first reached out to us there was no question at all that I was going to back them on Kickstarter. It’s not just because it’s a nerdy subscription block and I am, well, a pretty obvious nerd. What really spoke to me was their passion and dedication to the project. Some people come to Kickstarter with a half-baked idea and good intentions. The folks at Geek Fuel, though? They have a real plan. They wanted to create their own monthly subscription box featuring 6-8 quality items (often with a t-shirt among them) and it wasn’t just an idea. They already had a lot to show for themselves.

They had already locked down a warehouse and started preparing their first boxes by the time they went to Kickstarted for help with extra funding. A lot had already gone in to making Geek Fuel a reality before they started looking for the additional funding to help offset startup costs. This was a sure thing from day one and if they didn’t get their Kickstarter funding they had a solid basis from which to make their dreams a reality regardless. And their logo and box designs looked great.

All of this showed me just how serious they were and that is the real reason why I knew I would be backing Geek Fuel.

And they offered up a pretty great incentive: their first box would go out in December right after funding period ended. Their second lowest Kickstarter funding tier was just $24 and included not just the first box but also a limited edition bonus box with a Kickstarter exclusive t-shirt and two other items.

As they said in their Kickstarter FAQ, it’s rough to have to wait so long for incentives when you back new companies. Sometimes it can take years to see anything for your investment – if you see anything at all! “We feel the best way to show our gratitude is to offer a short waiting time and deliver on that promise.” They are hitting the ground running here, folks.

These are the kind of people I like to see on Kickstarter and these are kind of people I like to support. People who have a great idea, know how to make it happen, and who also know just how important the people who supported them are to everything. I for one look forward to getting my December Geek Fuel box. I’m very interested in seeing how Geek Fuel is put together.

Now, you might be thinking: do we really need another nerdy subscription box? And I would argue that, yes, we do. We deserve options. We deserve the choice of a number of different communities. The folks are Geek Fuel aren’t looking to put Loot Crate or Nerd Block or any other subscription box (Hero Crate, etc.) out of business or even necessarily compete. They want to compliment the existing services and offer an alternative with their own unique twist. Loot Crate and Nerd Block are great but they do things different. And I think it’ll be nice to see Geek Fuel in the running, too, with their own unique way of curating boxes and engaging subscribers.

You can still join the GeeK Fuel Kickstarter campaign for the next couple of days. It ends on November 20th. With the exception of the $15 tier which nets you a Kickstarter exclusive t-shrit, every tier involves a subscription to Geek Fuel – up to five years – often with additional incentives. You’re not just supporting Geek Fuel but getting some incredible value in return.

If you miss the Kickstarter campaign don’t worry. You’ll miss out on the backer exclusive t-shrit and bonus box but you can still subscribe on the Geek Fuel website later. Geek Fuel will offer several different subscription plans ranging from one to twelve months with prices between $14.90 and $18.90 (plus a $5 shipping and handling fee) per month depending on the monthly plan selected.

Already a subscriber of Loot Crate and/or Nerd Block? Who cares. Take a chance. For $24 on Kickstarter and the guarantee of a box by the end of next week it’s more than worth a shot. I’m going to go out on a limb here and say you won’t be disappointed.