‘Elizabeth and Zenobia’ Is A Newer, Grimmer Fairy Tale! 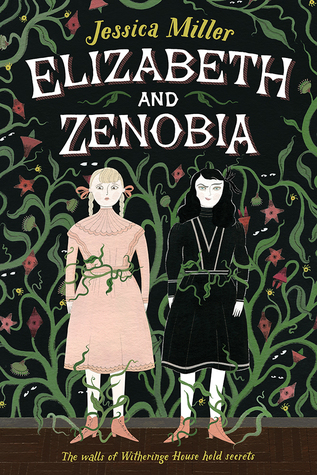 
Rating:
Back when I was a macabre, middle-school book nerd (find me someone who hasn’t had an emo phase and then we can talk), I was obsessed with Grimm’s Fairy Tales. I bought the fancy-covered, Barnes & Noble anthology from the Classics shelf, plunged my bedroom into darkness with a sweep of my curtains, and delved in.
Elizabeth and Zenobia captures that Grimm fairy tale feeling – and lifts it into the modern age for middle-grade readers. The story follows Elizabeth, a young girl who moves into Witheringe House after her mother leaves her family for an affair with a touring opera singer.
She relocates to Witheringe House, a large manor estate surrounded by decaying gardens, with her botanist father and her not-so-imaginary poltergeist friend, Zenobia. Zenobia is transfixed by all things creepy (think a meaner spirited, well-read Wednesday Addams), has telekinetic powers, and often pressures Elizabeth into unpleasant situations. From holding seances to gathering poisonous fungi, Zenobia bullies Elizabeth into accompanying her on terrifying adventures.
After Elizabeth discovers that Witheringe House and its gardens are linked to the disappearance of a long-lost family member, she and Zenobia go on a quest to bring her back before it is too late.
I love the vibe of this book, it was perfectly creepy and atmospheric without being overly detailed. An otherworldly Zenobia and her push-and-pull relationship dynamic with Elizabeth were fascinating. Both girls felt authentic and well-written. Zenobia was equal parts hilarious and horrific, while a timid Elizabeth slowly gained the confidence to face her fears.  Clocking in at around 200 pages, this was a breezy jaunt through a haunted mansion, perfect for Halloween.
This book is definitely age-appropriate for middle-grade readers going through a gothic streak. The mystery felt like a gory Grimm fairy tale brought to life. Even though there was no explicit violence or gore in this book, there was implied gruesomeness in the gardener’s grafting scenes and the race to stop the Plant King from kidnapping children (also, curse you, Clue Finders 5th grade for making me so terrified of plant people!).
The only real detractor was that the ending makes a wink to the ‘it was all a dream’ possibility, but the rest of the story was so satisfactory that I don’t think the weaker ending mattered.
I highly recommend Elizabeth and Zenobia for burgeoning fans of Grimm’s Fairy Tales and for budding horror story aficionados. It strikes a perfect balance between creepy and campy, and I’d love to read more adventures about sweet Elizabeth and sour Zenobia.