On Friday, December 9, the doors will open on the new exhibit at the Warner Brothers Studio Tour Hollywood: Harry Potter and Fantastic Beasts and Where to Find Them.

Highlights of the Fantastic Beasts experience include costumes worn by Eddie Redmayne (Newt Scamander), Katherine Waterston (Tina Goldstein), Alison Sudol (Queenie Goldstein), Dan Fogler (Jacob Kowalski) and Colin Farrell (Percival Graves), as well as Newt’s case of creatures. Guests will be able to explore how J.K. Rowling’s Wizarding World has been brought to life on the silver screen over the past 15 years.

The expansion will take guests on a journey from concept art to final designs used on set. Tour guests will be able to see the detailed costumes of Lord Voldemort, from a young Tom Riddle to his rise as the Dark Lord. Guests will also have the opportunity to be sorted into one of the four Hogwarts houses by the magical Sorting Hat. This interactive experience will take place in front of a life like image of the Great Hall which will include costumes of iconic Hogwarts professors. As a finale to the exhibit, guests will be able to explore the newest film from the Wizarding World, Fantastic Beasts and Where to Find Them.

At an advanced press preview of the new tour, we were able to explore the exhibit complete with baked goods, candies, and magic! Check out our experience and how much fun we had! 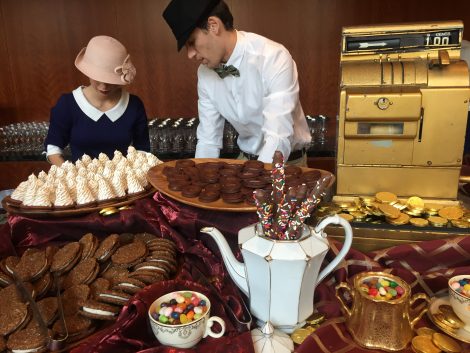 The opening reception was held with all the 1920s glamour they could muster. Waitstaff were wearing newsies caps, suspenders, and pin curls. Attendees ranged from casual to down-right-flapper. And everyone was ready for the magic that is Harry Potter and Fantastic Beasts.

Both Dan Fogler (Jacob Kowalski) and Bonnie Wright (Ginny Weasley) attended briefly to welcome us into the Wizarding World. Dan Fogler expressed his excitement at the exhibit when he was sorted into… Gryffindor! In support, an attendee handed him a scarf to welcome him into the Burgundy and Gold house. Bonnie Wright wielded her wand (recently flown in to be added to the exhibit), and taught us the proper technique for Wingardium Leviosa with the most practiced of “swish and flicks.”

After their introduction, we were allowed to wander up to the exhibit, which followed a wonderful flow beginning with Harry Potter receiving his Hogwarts letter through his years at the school (although the exhibit really ended at Goblet of Fire) before transitioning into the Fantastic Beasts section. 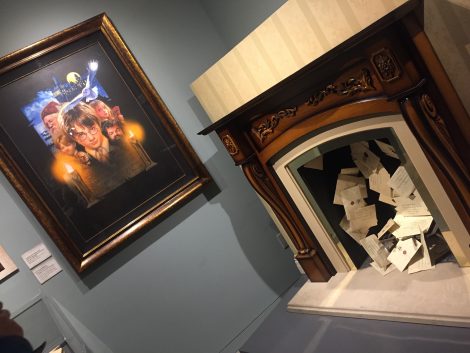 The exhibit includes props and original art from the films, as well as storyboards and costumes ranging from school robes to Azkaban attire. Below, you can see Mr. and Mrs. Weasley’s (Mark Williams and Julie Walters, respectively) outfits used in the later films. 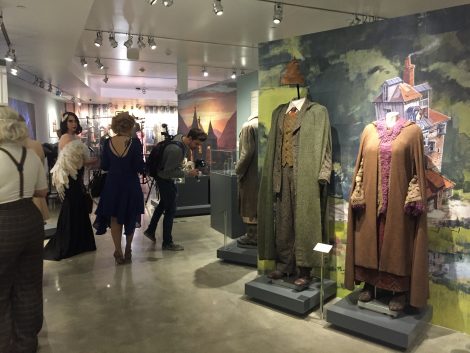 Perhaps the highlight of the exhibit, guests can sit on a stool and be sorted by the very real Sorting Hat (I was sorted into Hufflepuff, which is good, because I own the sweater). The cheers that would erupt from respective houses was a special thrill for any Harry Potter fan. 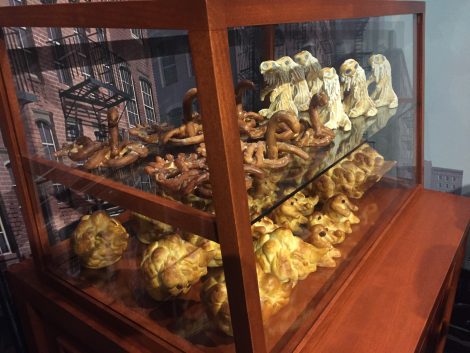 After the sorting ceremony, guests continue pasts a few remaining Harry Potter props before arriving at the original prop edition of Fantastic Beasts and Where to Find Them, which is where the exhibit shifts to the recent film.

After a photo op at Port Authority, the exhibit proceeds to MACUSA (Magical Congress of the United States of America) and the costumes for Percival Graves (Colin Farrell), Jacob Kowalski (Dan Fogler), and Newt Scamander (Eddie Redmayne).

Overall the exhibit is a fun, immersive experience that allows guests to realize just how detailed these film worlds are. So real that you can almost touch, feel, and smell them.

Warner Bros. Studio Tour Hollywood is a recipient of Trip Advisor’s 2015 Travelers’ Choice Awards and has been recognized as one of the Top 25 Attractions in the United States. Fans get to see the real sets and soundstages where the greatest names in entertainment made history as they touch, tour and explore the iconic 110-acre studio that brought Argo and Ocean’s Eleven to the big screen. From The Big Bang Theory to Friends, the Studio Tour takes guests behind the camera for a revealing look at how the magic is made.

A visit includes a rare look inside many of the lot’s production areas as well as the innovative new addition to the studio tour, Stage 48: Script to Screen. The interactive soundstage offers guests the unique opportunity to explore the full film and television production process and the glory of awards season. Guests explore the Archive, which currently showcases DC Universe: The Exhibit. This interactive exhibit pays homage to the origins of DC Comics, including original comic books featuring all seven Super Heroes of the Justice League. Additionally, guests can explore authentic props and costumes from Batman v Superman: Dawn of Justice and Suicide Squad. Guests also stop by the Prop Department, which features one of the largest selections of rare antiquities and modern furniture, rugs, drapery, lighting and hand props from Hollywood’s golden era, followed by the Picture Car Vault, home to some of Batman’s most famous vehicles.

Warner Bros. Studio Tour Hollywood is open Monday through Sunday, 9:00AM to 3:00PM, with studio tours departing every 30 minutes and extended hours offered during the summer season. Reservations are recommended and all children eight years or older are welcomed. Tickets are $62 per person and can be purchased online at www.wbstudiotour.com or by calling 818-977-TOUR (8687).