Review: Alcatraz vs. the Evil Librarians – The Shattered Lens by Brandon Sanderson 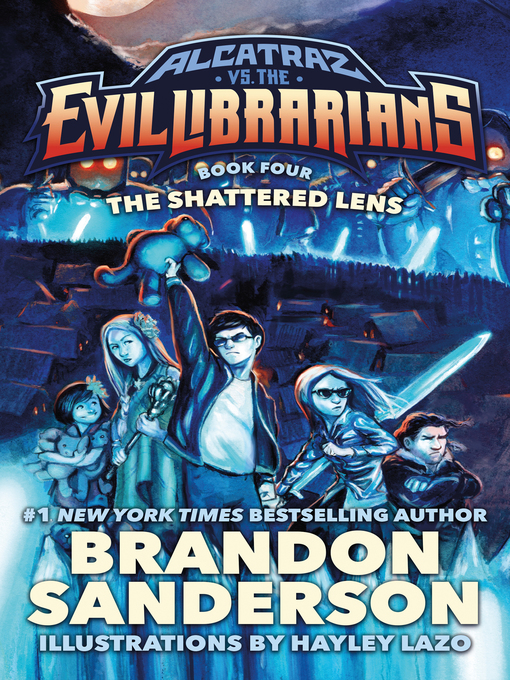 The Alcatraz vs. the Evil Librarians series is one of my favorite middle grade series being released right now. Part of the reason I enjoy them so much is that they are written by Brandon Sanderson and he’s a pretty awesome writer. He writes a lot of great books for all age groups. The main reason I enjoy them so much, though, is that they are just fun. The characters and the story arcs are some how both cohesive and absolutely absurd at times.

And yet it always works.

See that teddy bear Alcatraz is holding on the cover of this book? It explodes. One of the Freelander weapons of choice are teddy bear grenades that do various things from explode to acting as mini gravity wells and more. I mean, who even comes up with that? Brandon Sanderson. And it works because as absurd as the world-building may seem at time it all connects. It’s all so artfully done that after a while it becomes a lot less absurd.

You also get used to Alcatraz’s crazy narration. He’s a narrator that you want to believe but at times have to question because he open admits he lies to you. The whole thing reads almost like a stream of consciousness told story and still you learn to love it. You learn to love Alcatraz’s eccentricities. And then there is the book formatting. This book gets a little quirky with the chapter titles and at one point Alcatraz explains why it’s like that and it just… makes sense.

This book diverts a bit from the other books because it starts to get a little bit heavier. Sure, there’s a lot on Alcatraz’s plate in earlier books but the book stays light-hearted. I’m going to kind of spoil something for you guys here, though. They don’t stay that way. We’ll be posting our fifth book review soon and… yeah. You can tell that things are starting to mature in this book – and that Alcatraz is starting to mature.

The Shattered Lens takes it’s name for a particularly glass-hating group of Librarians who have gone to the nation of Mokia in hopes of conquering it and overthrowing the Freelanders that live there. The bulk of this book – believe it or not – is basically a war story. Alcatraz joins up with another of his Mokian cousins (the very young sister of Sing Sing and Australia – Aydee) and some of the others to go and try to turn the tide of the war. Well, really they go in hopes of forcing the Knights of Crystallia to follow in order to protect Alcatraz. But nothing ever goes according to plans and Alcatraz finds himself placed in some unenviable positions without the people he’s come to depend on.

But it’s not all doom and gloom.

This book also has a lot of very not-subtle hints as far as Alcatraz and Bastille’s budding relationship goes. They’ve very slowly started to get closer and closer throughout the series and in this book you see a whole lot more of that. Alcatraz isn’t just some kid any more. He’s an occulator. He’s a leader. He’s essentially royalty. He’s a Smedry. And he’s really starting to realize what all that means and the sort of tough decisions he’s going to face.

I love that this book really took things up a notch. It’s a fun series – but sometimes you need to bring the quirkiness down a notch. Granted, it doesn’t get turned down much. Still, The Shattered Lens shows us just how serious the battle between the Freelanders and the Librarians is and how high the stakes are going to get from here on out.

The Shattered Lens is a perfect fourth installment in this excellent middle grade series. Alcatraz Smedry fans need to pick it up now and then immediately move on to the fifth book. Because as great as this book is – that fifth one is going to absolutely throw you all for a loop! I can’t wait for you all to read it and feel the way I do now.

A REVIEW COPY OF THE SHATTERED LENS WAS PROVIDED BY THE PUBLISHER IN EXCHANGE FOR A FAIR AND HONEST REVIEW. NERDOPHILES WAS IN NO WAY COMPENSATED FOR THIS REVIEW. OUR OPINIONS ARE OURS AND OURS ALONE.