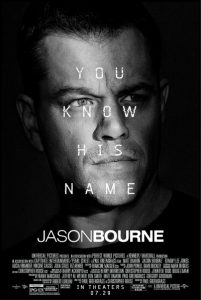 Review Spoilers: Low
Based On: Bourne franchise of Robert Ludlum

Matt Damon and Paul Greengrass reunite to bring their famed spy back into the fold. Jason Bourne resurfaces and is pulled back into the spy game by an old ally with more information about his secret origin. As the line goes, ‘Remembering everything doesn’t mean you know everything.’ So let’s watch our ol’ pal Jason learn somethin’.

To put it simply, this entry in the Bourne franchise delivers on more of the same. Now, if you liked the others, you’re in luck! I think you’ll find just enough to keep you happy here but don’t expect an entire reinvention of the genre. Or, really, anything new for that matter.

We get some intense spy-counter-spy action between Damon and Vincent Cassel, who is credited only as ‘Asset.’ Pretty damn cool if ya ask me.  Lots of fast talking folks in suits with Alicia Vikander as the head of some Cyber Sleuth division of the CIA and Tommy Lee Jones as the perfect old guard military man who values security over little things like personal liberty.

All of the actors do a pretty solid job, again they deliver adequately for what they are in. Maybe the one weakest link in this chain is Stiles, who seems tired of being brought back. Tommy Lee Jones as mentioned earlier plays the sort of Cold War spymaster who would be the unflappable hero of yore, but having survived to the Digital Age has found himself becoming the villain (at least in the audience’s eyes).

Vincent Cassel is a long time favorite of mine and he really is underutilized in just about everything ever. He is talented and his striking looks make for a character much more memorable than the random buzzcut bad-spys Bourne has previously run up against.

Digging into the plot, this movie suffers in several ways. While attempting to tie this film neatly into the first three, the plot becomes very convenient, if you take my meaning, when it deals with Bourne original induction into the Treadstone program and who created it.

It’s the type of stuff you’d expect in those soap operas dressed in tights known as superhero movies or comics. This of course ties in amazingly neat with the villain in such a way that completely negates any sort of grey morality this movie could have been discussing with the idea of leaks, privacy, etc.

It’s a big misstep in my opinion that also has the drawback of hindering the character development Bourne claims to be attempting. Bourne says he wants to find another way, to break the cycle and get out of it, but his actions are very much the opposite and you’d think after 4 movies now they would know which way they’re swinging.

In fact, that might be my biggest gripe with Jason Bourne. The movie makes passes at bigger ideas but averts its path before it ever has to take a stand and say anything. The movie mentions Edward Snowden multiple times and features a character who essentially runs the Bourne-verse’s Wikileaks, who Bourne beats up with a chair and reaffirms that he (Bourne) is nothing like Assange-lite,  though Bourne did leak a bunch of classified documents in the third film didn’t he? Yeah. I don’t get it either. Cassel’s character’s motivation is an understandable and, if I may be so bold, righteous one until the third act makes it moot by amping up other plot points further.

There’s also this weird reoccurring discussion of Bourne’s dad not wanting him to become a killer (meaning not become a part of the Treadstone program) when we clearly see that Bourne, then Webb, was in the armed forces prior to ever being inducted, though I may have that backstory incorrect. Are soldiers not killers? Is there a fine distinction this movie is attempting to make? I don’t think so and the more and more I dwell on the ideas of what this movie could have been, the more and more disappointed I am finding myself in it.

Jason Bourne is in theaters now.