The Vampire Diaries: Days of Future Past Recap

Synopsis: A lot of events happen to get all the characters in the same place at the same time so that Stefan ends up back in the Phoenix stone right as Nora and ML sacrifice their lives to destroy it.

Whew! It’s been a little while since the last episode of TVD, so here’s a quick refresher:

Now that that’s done, let’s get on with the episode, which was directed by none other than TVD’s own Ian Somerhalder!

Three years later, Damon and Stefan narrowly escape from Rayna – flashback to 3 years ago, where Stefan plans to flit about the globe and fall back in love with Valerie.

Meanwhile, the Armory has been experimenting on Mary Louise (or Nora? whichever is the blonde one), poisoning her with Rayna’s blood. They promise to release her if Nora (or is it Mary Louise? whichever is the brunette one) captures Enzo for them. The Armory believes Enzo released Rayna – a deed which Matt committed. 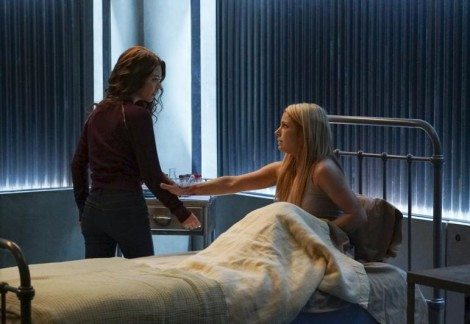 While Stefan flees, we also learn that home-field advantage goes to Rayna, who can see what her victims are doing through the magical connection of the scar. However, Rayna has grown quite fond of Stefan over the years and desperately wants to help him escape from her magical compulsion.

Flashing over to Matt, Enzo kidnaps him to figure out why he released Rayna – Matt says to ask Stefan… right before Nora bursts in and gets incapacitated by Enzo’s anti-witch blood pills, letting Matt escape. Nora and Enzo agree to help each other and capture Rayna again. Later in the episode, we learn that Stefan killed Matt’s partner and Matt wanted revenge.

At the hostage exchange, the Armory tells Nora that there is no cure for ML, which Enzo is particularly concerned about, because it’s heavily implied he gave some pills to Bonnie.

Turns out Valerie knew about the transfer scar spell all along, but the scar can only be transferred between blood relatives, so Valerie never told him about it before Damon woke up. Damon agrees to get the scar after Rayna closes in on Stefan. In the middle of the transfer, Rayna stabs Stefan and puts him back in the Phoenix stone.

Afterward, Rayna goes after Nora and ML – she throws her sword through their car windshield and the pair escape, only to realize that Nora has been marked. ML starts to destroy the Phoenix Stone with magic, and Nora joins in – agreeing that neither can live without the other. The two go up in flames as the stone shatters.