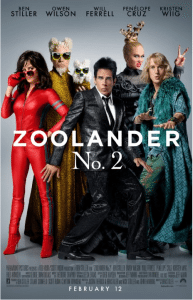 Ready for something really, really ridiculously crazy? We’ve been waiting for Zoolander 2 ever since that first trailer and when Derek grabbed a phone at a fashion show…and now it’s here. Should you go see it? Obviously. Is it better than the first one? Nope. Is it absolutely stupid, zany, and laugh out loud funny? Positively!

Zoolander 2 is the epitome of dumbe comedy because you don’t think at all during the movie…you’re just laughing the entire time, without even knowing why. There are one-liners left and right and some really interesting characters. Sometimes you’re laughing because it’s utterly bewildering what they’re doing and thinking, other times you’re just laughing to laugh.

Regardless, it’s a very funny movie and it definitely uses a lot of references and jokes from Zoolander. The amazing thing about Zoolander 2 is the cameos; there are over 40 different cameos and they’re so much fun to point out. You see the amount of fun everyone is having on the movie set. I think that’s what this movie was all about, it was not meant to be serious on the plot or anything held to high regard, it was just a party for everyone to make it and enjoy doing it.

The movie picks off from where it ended, showing Derek Zoolander (Ben Stiller) being a horrible father to Derek Jr after Matilda died in a fire. Derek becomes a hermit crab and Hansel (Owen Wilson) goes to meditate in the desert, along with his crazy orgy family. A certain amount of time passes and A-list celebrities are being killed all around each dying with a signature Zoolander look. Derek and Hansel are recruited into Interpol to find the killers and to stop an evil plan to take over the world. Along the way, Derek wants to show he can be a good father and Hansel is trying to find his self again.

Final Thoughts: Ben Stiller nails Derek Zoolander like nobody’s business and everyone that tries to imitate Blue Steel just fails horribly. It’s cute to see them try though. The romantic relationships in this movie are about as shallow as you can imagine, but it’s fun to watch nonetheless. It all sounds like a contradiction because truth be told it’s just a fun to watch movie. It’s the kind of movie you’ll quote one-liners from and put on in the background to have some laughs. Is it unfortunate that this movie came out the same time as Deadpool? I think so, the timing of the release could have been better and I think overall would have done Zoolander 2 better. But if you’re feeling down, grab a friend and go see Zoolander 2, then practice your Blue Steel in the mirror.