Find Hope at the End of the World in ‘Spread’ 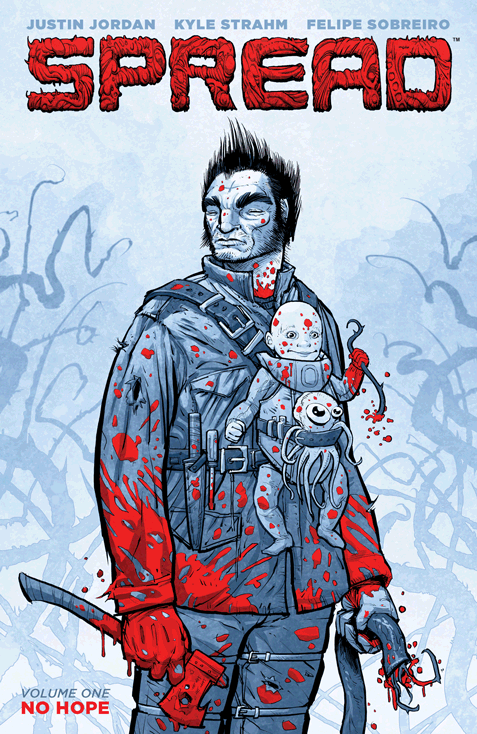 After reading the forward to this first trade paperback I kind of love Kyle Strahm – the artist – as well. We seem to have a very similar mindset when it comes to gruesome horror. There’s just something awe-inspiring about overzealous gore. We both grew up watching gross 80s and 90s horror flicks with their fountains of blood, Graboids, and other outlandish attempts to wig people out. He’s embraced that aspect of horror – the part that doesn’t shy away from how gross things can be and instead embraces it.

This is probably one of the reasons I love this series so much. It’s gross but still fun in a ridiculous way. The Spread – a ravenous, murderous entity – is this red mass of flesh, eyes with teeth, and oozing orifice. It’s everywhere and it’s brought us into this post-apocalyptic world. It should be terrifying (and some of the things it creates really are) but it’s just so over the top.

The story of Spread focuses on that of a strong, solitary man known as “No” and the infant he finds in the quarantine zone. She’s ultimately named Hope and she serves as a our narrator commenting on her own story from the future. Yeah, it’s a little like Saga. The little girl is named Hope which Alana straight up vetoed as an option for Hazel in that series.

But you know what?

I really like that narration style. It works for me. So I don’t care. Spread becomes something akin to The Walking Dead if it were narrated by Judith (you http://humanrightsfilmnetwork.org/topamax know, spoiler, if she hadn’t died in the comics). And if maybe Judith’s tears could dissolve zombies. Because that’s what Hope’s tears do – they dissolve the Spread.

The world our characters find themselves in isn’t a nice one. Along the way Hope finds a surrogate mother but also finds herself – at just months old if that – hunted by maniacal servants of the Spread. Pretty much every day is a struggle to survive in a world that is not meant for babies (which is something that her adoptive mother knows all too well).

Ultimately, Spread is a fantastic pick for horror fans all around. It takes some of the best parts of some of Image’s other flagship series and then throws in an almost comedic amount of gore. And it works. It really does. If you can appreciate it for all that then Spread will be a great book for you. It’s certainly a book for a particular set of readers but if you’re in that target audience you’re going to enjoy it.

A review copy of this title was provided by Diamond Book Distributors and Image Comics via NetGalley in exchange for a fair and honest review.