Logan, The End is Here 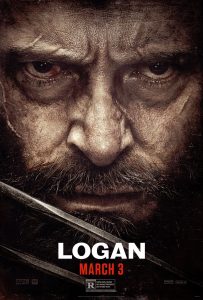 Review Spoilers: High, but there will be a big ol’ warning when they pop up.

It’s here, the ‘final’ chapter in the Wolverine saga: Logan.  James Mangold and Hugh Jackman return to tell the third chapter of the Wolverine story — well really, the normal X-movies are basically his anyways — so it’s like the eighth, anyways. The crew behind the much-better received The Wolverine are here to continue their take on the grizzled antihero. Where does it fall on the scale of Wolverine movies, closed to the damnable abomination of X-men Origins or reaching new heights? Well, as I’m sure you’re hearing all over the place, the general consensus is that it’s pretty damn good. But, I have to be honest, I thought it was underwhelming.

Logan sees an aged, over-the-hill Wolverine working as a driver along the U.S./Mexican border to pay for booze and meds. The meds to care for a fading Professor Xavier, and the booze for himself, naturally. It is the not-too-distant future — hardly the post-apocalypse the pseudo-source material uses or what the teasers and chatter lead folks to hope for — Professor X’s mind is slipping, Wolverine’s healing is slowing, and mutants have stopped being born. Into this comes a stranger with a package (a mysterious mutant girl) and a job. Get the girl to Eden. The wayward western road trip movie goes on from there, seeing the protagonist racing across the U.S. while evading cyborg mercenaries known as Reavers who want to capture the package.

The R Rating gets put to use, the very first word from Wolverine’s lips reminding you, in case you had any doubt, the ensuing scene featuring a whole mess of carnage that fans have been clamoring for for 17 years. The film throws a lot of cool ideas on screen only to fail to really use them. The nearly bleak future setting, the plight of Professor X, the deterioration of Logan, the dynamic of Logan and a young female character (sure it’s sorta retreading his relationship with Rogue from X-Men, but they go a bit deeper,) the cyborg Reavers, the play between reality and fiction (X-Men comics exist in the movie’s fiction) all are ideas worth exploring, but in action they’re often handled clumsily. The action while intense and visceral at the start gets a bit trite by the end, as it turns out there are only so many ways for characters with knives coming out of their hands to fight. The movie hits a low point at the reveal of its villain and plods forward alternating between good ideas and poor execution.

The action while intense and visceral at the start gets a bit trite by the end, as it turns out there are only so many ways for characters with knives coming out of their hands to fight. The movie hits a low point at the reveal of its villain and plods forward alternating between good ideas and poor execution.

Hopefully, you’ve already seen the movie. Critics are calling it ‘not just a great superhero movie, but a great movie,’ and adding other outlandishly high praise. I cannot agree. It is a good enough movie, full of promise, that unfortunately feels underwhelming when it fails to act on that potential.

So here are my gripes with the movie. It’s a flick so in love with Wolverine, that in an endlessly rich universe of source material to pull from, the route they decide to take is to jam it with more Wolverines. So, while our hero is driving about the desert in his white wife-beater, protecting his little girl Wolverine clone, he is also being pursued by Evil corporation and their black wife-beater clad Wolverine clone. It’s the strangest thing. All of the X-Universe and all they can think to do is put three Wolverines in the damn thing?

The movie is more a western, as its use of Shane (1953) and cowboy white/black hat white/black tank top is overt. Again, good idea, but a bit sloppy. While the storyline Old Man Logan featured a post-catastrophic victory of evil, instead the movie’s world is barely changed, despite what the trailers would lead you to believe. Mutants don’t really exist anymore. A couple mega corporations exist and seem to be behind all food and beverages. One of the best moments in the movie sees Logan and gang interacting with a family of farmers just trying to get by with the MegaCorp next door hassling them. It’s the kind of thing that fits the genre they’re going for, only for it to come to rough end as EviLogan shows up. More on that later.

The relationship between Laura, or as comic fans know her X-23, and Logan is rich with potential, having to deal with a child with all of his worst traits is testing to Logan, but this gets mired down by all the characters maintaining that Logan is her father. Professor X, the woman who brings Laura to Logan, and Laura herself are consistently try to impress a father relationship on Logan throughout the film. Had Laura been the one to do it, it would have been forgivable and likely much more impacting as her existence as a test tube kid raised on the ‘histories’ of X-men comics would create empathy. Instead, characters who know she is the result of genetic engineering give Logan the rap of ‘Don’t be a dead-beat dad!’ Again. Strange.

When EviLogan shows up midway through the movie to kill Professor X it feels unearned and empty. It’s the first time we’ve seen him, it’s meant to shock and confuse us, “Did Logan just kill Professor X?!” but how can I begin to care when it is such a shallow shock? EviLogan represents the rage and uncontrollable aspects of Logan, all the bad with none of the heart Logan has earned over the years. But this duality is a well-trod path.

As the movie continues, Logan and Laura continue searching for Eden, while Logan’s healing and body shut down. Laura needs to rendezvous with other lab-made mutant kids to escape to Canada, where the evil corporation, Transigen, can’t chase them down any longer. This plot point isn’t quite clear as Transigen appears to be operating their lab out of Mexico City, and have had no problem chasing them into the U.S. I guess near-future Canada has Alpha Flight on their side?

And so this all leads to the final confrontation, mutant kids being chased through woods by soldiers. Not the most original scene, I know. Despite their powers, there is a distinct lack of cool uses said powers to slow down their pursuers. While the movie would have us believe it’s because the kids don’t want to be soldiers, don’t want to kill like they were being programmed, they later flip the tables and kill many of the soldiers when it gets down to it — some in cool ways, others less spectacular. Wolverine has injected a bunch of green mutant berzerker juice, a concoction based on his own DNA, allowing him to heal faster again but at the risk of death and rage. He chops up a bunch of guys with guns, shoots the human evil doctor (who has tenuous ties to a character in

Wolverine has injected a bunch of green mutant berzerker juice, a concoction based on his own DNA, allowing him to heal faster again but at the risk of death and rage. He chops up a bunch of guys with guns, shoots the human evil doctor (who has tenuous ties to a character in X-Men Apocalypse apparently, but is otherwise unworthy of his role in this story) and fights EviLogan. They stab each other a bunch and Logan gets impaled on a tree. In the fray, Laura uses Chekov’s adamantium bullet (the one hold over from X-Men Origins) to blast EviLogan’s head off. A heartfelt speech is then delivered from Logan to Laura about not being what they made her and she weeps and calls him Papa. It is touching, and would be more if we hadn’t already had to listen to everyone in the movie absurdly saddle him with that relationship.

Again, the movie — and perhaps the final chapter of Jackman’s Wolverine saga — goes out with less a bestial roar and more an undecided whimper and I can’t help but be a bit disappointed.

Logan is in theaters everywhere.