“The Sun and Moon” is a Simple, Stylish & Addictive Platformer 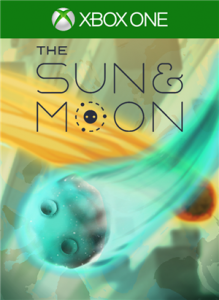 Xbox One just got a delightful new platform in the shape of The Sun and Moon, the latest release from game developer Daniel Linssen. The Sun and Moon is a simple and sleek platformer, that in it’s original life won the Ludum Dare overall competition in April of 2014. The theme bonus of that competition was ‘beneath the surface’ and this game certainly nails it, you’ll see why in just a second. With everything so pared down, but not in a lackluster way, more a refined way, this game is sleek and deceptively difficult.

The game opens and you find your character, a small orb, sitting inert. At the top of the screen is a display, showing an objective time, the Level number, and the current timer, floating throughout the dots of indeterminable matter, and a swirling black hole.

The objective, though you are never told explicitly, is to grab the three dots, and make it to the warp. Simple right? No controls are explained, it is only through trial and error that you learn what controls do what. The game runs off the joystick/directional pad, the A and Y buttons and the triggers. The joystick, naturally, controls movement while A is Jump, Y is a Reset, and with a squeeze of the Trigger the whole game changes.

You see, the darker colored shapes such as the floor, the walls. All of those are permeable. With just the press of the right (or as I later learned the left) trigger your avatar can now swoop through the surfaces. This opens up the mechanics of momentum as the further you’ve moved before plummeting into the solid, the further you’ll zip through it, and the further you’ll be propelled out.

All this ends with lots of plummeting into the abyss, colliding directly into spinning diamond shapes that tear you apart, or on the rare occasion my dumb sausage fingers work correctly, the smooth carving through the map, collecting all dots before dunking into the warp with the utmost feeling of triumph.

But triumph is fleeting. As soon as you complete a level your time will be measured up against the possible rewards, a Crescent Moon, a Full Moon, and a Sun. Then you’re returned to the level select and several more points unlock along a grid.

Each ‘System’ (or at least the first two) is made up of roughly 20 levels. With the achievements showing 10 total systems that puts this game at a whopping 200 levels to be mastered. I can tell you with utmost certainty, I will never be able to beat them all. But I’ll be damned if I don’t keep going back shoulders tensed up and palms sweaty as I keep trying.

And so the replay factor begins as you try to shave off seconds, then hundredths of a second to secure Suns. If you’re particularly good at these kinds of games no doubt you’ll easily secure Crescents left and right. If you’re like me, it’ll be  a struggle most the time to even beat the level and then the rare level where everything makes sense immediately will drop into your lap, rewarding your struggle.

The point I haven’t made yet, which is a travesty to be sure, is the music. Boy, howdy those tunes. The background music begins when you start the game, and continues, uninterrupted through each level, looping continuously in it’s chill progressions.

As my friend and I tore through the opening sections (he is much better at these than I) we found that upon starting the Second System, after a bit of time the soundtrack loops changed. Now there was a much more amped section to it. Whether this change occurred because we advanced from System One to System Two or because we had at this point put an hour into the game and it is a timed unlock, I can’t say. And that sort of mystery sort of exemplifies everything I like about this game.

With no hand holding instruction about how the mechanics work, the player is allowed that discovery. With no breaks between levels or worlds, the changes in music, in backgrounds, in colors, all are discoveries and as the player pieces together these things, they’re rewarded not in BONUS POINTS or ACHIEVEMENT UNLOCKED (though the game does have achievements!) it’s an internal reward of curiosity and surprise.

The Sun and Moon is a delightful, easy to pick up but difficult to master platformer and I recommend everyone give it a go.

A REVIEW COPY OF The Sun and Moon WAS PROVIDED BY THE PUBLISHER IN EXCHANGE FOR A FAIR AND HONEST REVIEW. NERDOPHILES WAS IN NO WAY COMPENSATED FOR THIS REVIEW. OUR OPINIONS ARE OURS AND OURS ALONE.