‘Cryptocracy #1’ Takes Your Circle of Influence to the Extreme 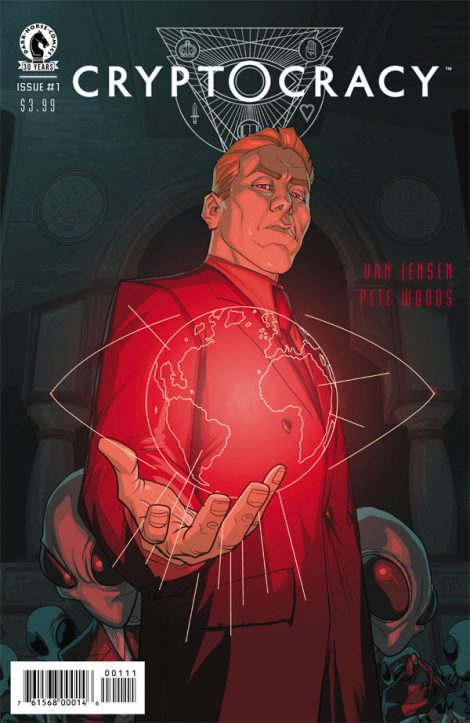 Somewhere around the middle of the first issue of Cryptocracy, I was hit with such a nostalgic feeling that took me until the aliens showed up to place: Men in Black. Between the talking Bugbear companion, the snappy dialogue, and the working class aliens, there was a tone to the series that was reminiscent of the movie. Which worked in the series’ favor, because as much as I was rolling my eyes at the start, I really began to enjoy the cliches from that point on.

From the first page defining ‘cryptocracy’ (a form of government where the real leaders are hidden or merely unknown), which also gives much of the exposition for the world in a handy/lazy chart, I was slightly unimpressed. Nine families rule the entire world and they abide by a nine circle caste system – from the First Circle of everyone who doesn’t even realize the families exist to the Ninth Circle of elders and priests, the oldest family members.

It’s an Illuminati concept that opens on a botched mission by Mars, the family that rules the North American territory, and naming the families after the planets (or are the planets named after the families?) is worth an eye roll by itself. The fallout from that mission puts a finer point on the world that the info-dump at the beginning didn’t and, as much as I hate to admit it, the predictable twist that ended the issue on a cliffhanger has me ready for the next issue.

Yes, there are a lot of things that “have been done” in this series – it’s not a groundbreaking story that redefines the genre – but that doesn’t mean it’s not fun in its presentation. Van Jensen’s writing makes for punchy and self-deprecating, cocksure characters that readers will immediately want to root for. The secondary characters like Jason, the aforementioned foul-mouthed Bugbear, and Gary the alien make for even more likeable comic relief.

The artwork by Pete Woods doesn’t mesh perfectly with the futuristic leanings of the series, with a few weird angles and strange forced perspectives, but the coloring does enough to bridge the gap. Bright neons and a lot of visual gags in branding carried throughout the issue underscore the more and less subtle pop culture references peppered across the pages. The futuristic technologies are also well represented, while some of the more chaotic fight scenes require a second look to really figure out.

One of the other things I struggled with was the lettering of the aliens’ speech bubbles. The font didn’t translate well to my iPad, where I was reading the comic, and I’m still not quite sure about all of what was said by Gary. I see the thought process behind underscoring the foreign, but it was distracted and really detracted from a smooth reading experience.

While it won’t be winning any awards for originality, Cryptocracy #1 is a surprisingly entertaining read that gets better with each page turned. The creative team should have little difficulty in continuing to endear audiences as we dig further into who or what is hunting the Families.

A REVIEW COPY OF CRYPTOCRACY WAS PROVIDED BY THE PUBLISHER IN EXCHANGE FOR A FAIR AND HONEST REVIEW. NERDOPHILES WAS IN NO WAY COMPENSATED FOR THIS REVIEW. OUR OPINIONS ARE OURS AND OURS ALONE.